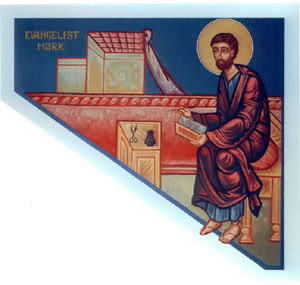 Actually, I have three "favorite" Gospel accounts: Mark, John, and Luke: in that order.  Poor Matthew, for whatever reason, doesn't do much for me, though I sure like all those parables he tells.
It's John's theology which I like: a gold mine for endless meditation, wonder and prayer.  Luke's appeal is that he's so realistically descriptive of people, Zechariah, Elizabeth, Mary, etc., but especially Jesus.  That, and the fact that he gives us, as Paul Harvey used to say, "the rest of the story" in his sequel: the Acts of the Apostles.
Mark's Gospel is short, and short is always good in my book! Turns out that shortness, for ancient manuscripts, is usually one clue for possibly being the earliest written.  For me, there's also a crispness about Mark that I don't notice in the other accounts. Within the first 30 verses an amazing amount of stuff happens: John the Baptizer (another of my all-time favorites) is on the scene, doing his baptizing ministry, including Jesus' baptism; Jesus goes into the wilderness, then thunders out of there and proclaims, in one simple sentence, the good news which he wants to get across; Jesus calls the disciples, who immediately head out with him on the road; Jesus teaches, Jesus drives out demons, and Jesus heals, beginning with Peter's mother-in-law. Mark's account is noticeable also for its honesty.  He doesn't at all gloss over  the Apostles' fumblings and failings, or their consistent inability to "get" Jesus' message.
Scholars identify John Mark, though tentatively at best, as the son of a Jewish woman who owned a house in Jerusalem, in which, some contend, that Jesus and the disciples held the Last Supper.  Mark's curious and very personal-sounding observation in 14:51-52 leads many to believe that he was the naked jaybird who ran off, eluding Judas and his crowd when they tried to grab him as Jesus was being led off.  Paul refers to Mark in Colossians as the cousin of Barnabas, which would make sense in that Mark accompanied Paul and Barnabas on Paul's first missionary venture.  That didn't go so well later because Paul and Mark had a sharp difference of opinion, and Mark baled on the other two, turning back.  Paul stubbornly held a grudge for awhile and wouldn't let Mark on his boat when he embarked on a later journey, so Mark and Barnabas teamed up to do their own gig in Cyprus.  Apparently, in time, Paul and Mark let by-gones be by-gones, and Mark was one of Paul's companions in Rome, where he may have written his account, and where he also met up with and became friends with Peter.
2nd century Bishop Papias of Hieropolis identifies Mark as the author of the Gospel account, and the tradition from that time was that Mark, so to speak, used the notes and recollections he'd taken from Peter's preaching and teaching as the basis for his writing.  The 1st Letter of Peter refers to "my son Mark", but then we're not sure if it was Peter who actually wrote those words or not.
According to the testimony of the historian, Eusebius, Mark travelled to Egypt and founded the Church at Alexandria, becoming their first overseeer.  As to where Mark ended up, the longstanding tradition is that "it is believed" that Mark was martyred eventually in Alexandria "by a mob of angry pagans".  Who else?!
Mark begins his account thus: "The beginning of the good news of Jesus Christ, the Son of God."  He sandwiches a concise, compelling  description of that good news [or Gospel] and its proclamation in between those beginning words and the words with which he closes: "...And they went out and proclaimed the good news everywhere, while the Lord worked with them and confirmed the message by the signs that accompanied it.  Amen."
"We thank you, God, for this witness, and pray that
we may be firmly grounded in its truth..."
Posted by Harry Allagree at 8:35 PM