The Simple Power of Word and Bread 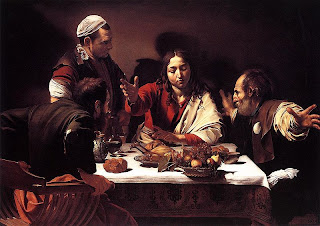 (Supper at Emmaus, Caravaggio)
O God, whose blessed Son made himself known to his disciples
in the breaking of bread: Open the eyes of our faith, that we may
behold him in all his redeeming work; who lives and reigns with
you, in the unity of the Holy Spirit, one God, now and for ever. Amen.
Now on that same day, the first day of the week, two of the disciples were going to a village called Emmaus, about seven miles from Jerusalem, and talking with each other about all these things that had happened. While they were talking and discussing, Jesus himself came near and went with them, but their eyes were kept from recognizing him. And he said to them, "What are you discussing with each other while you walk along?" They stood still, looking sad. Then one of them, whose name was Cleopas, answered him, "Are you the only stranger in Jerusalem who does not know the things that have taken place there in these days?" He asked them, "What things?" They replied, "The things about Jesus of Nazareth, who was a prophet mighty in deed and word before God and all the people, and how our chief priests and leaders handed him over to be condemned to death and crucified him. But we had hoped that he was the one to redeem Israel. Yes, and besides all this, it is now the third day since these things took place. Moreover, some women of our group astounded us. They were at the tomb early this morning, and when they did not find his body there, they came back and told us that they had indeed seen a vision of angels who said that he was alive. Some of those who were with us went to the tomb and found it just as the women had said; but they did not see him." Then he said to them, "Oh, how foolish you are, and how slow of heart to believe all that the prophets have declared! Was it not necessary that the Messiah should suffer these things and then enter into his glory?" Then beginning with Moses and all the prophets, he interpreted to them the things about himself in all the scriptures.

As they came near the village to which they were going, he walked ahead as if he were going on. But they urged him strongly, saying, "Stay with us, because it is almost evening and the day is now nearly over." So he went in to stay with them. When he was at the table with them, he took bread, blessed and broke it, and gave it to them. Then their eyes were opened, and they recognized him; and he vanished from their sight. They said to each other, "Were not our hearts burning within us while he was talking to us on the road, while he was opening the scriptures to us?" That same hour they got up and returned to Jerusalem; and they found the eleven and their companions gathered together. They were saying, "The Lord has risen indeed, and he has appeared to Simon!" Then they told what had happened on the road, and how he had been made known to them in the breaking of the bread.  (Luke 24:13-35)

Father Robert Schreiter, C.PP.S. calls the Emmaus story a "master narrative" into which you and I can lay our life stories and thereby discover Jesus' presence in our own journies.

I remember vividly the Mondays after Easter while we were in seminary.  We called it "E-mmaus (as in E-mouse!) Day".  It was the day when this selection from Luke was read for the liturgy of the day, and, most importantly, it was always a free day for us.  In major seminary we were even permitted to go off campus on this day: walking, of course, or riding bikes; journeying; perhaps even visiting, for some of the seminarians' families lived in towns nearby the seminary.  Inevitably, our journeying would be accompanied by 1) food of some sort; and 2) discussion, sometimes lively, with one another.  It was definitely a day of communion and joy.

No one today knows for sure where ancient Emmaus was.  For sure, it had a long history of violence.  It's mentioned as a camp for Judas "The Hammer" Maccabeus.  In 4 B.C.E. the village was burned by the Romans as punishment for revolts which apparently originated among the Emmausites, and 2000 rebels were crucified there.  These memories would still linger in the common memory even in Luke's time.  Emmaus was a place associated with trauma and defeat.

It appears, since Luke says the two disciples were travelling toward Emmaus, "about seven miles from Jerusalem" that they'd forgotten Jesus' directive to "stay in Jerusalem", and thus were going the wrong way! So preoccupied were they with their back-and-forth bantering that they hardly noticed that someone had fallen in pace beside them, someone whom they didn't recognize.  He casually engages them by asking what the topic du jour is, at which point they stop dead in their tracks.  Luke's poignant remark is, "They stood still, looking sad."  Even though walking, they were making no progress.  The conversation continues about all that's been happening, about which the stranger apparently doesn't have a clue.  The disciples speak of Jesus in the past tense: he "was a prophet", whom the authorities "had handed over" to death by crucifixion, a man whom they "had hoped was the one to redeem Israel."  Resurrection didn't even register in their minds yet.  Like us, in the midst of our frequent extinguished hopes and lost dreams, the living Jesus isn't very real for us.

The disciples go on to tell their new road companion that some strange things had happened that very morning.  Some of their women had gone to the tomb, but couldn't find the deceased Master, and even babbled on about a "vision of angels" who claimed that he was alive! And some of the men had even gone and verified the emptiness of the tomb.  But...  The two disciples, still stuck in their inability to put it all together, couldn't bridge the gap of faith.

Then the stranger, obviously familiar with the Hebrew Scriptures, engages in a little friendly midrash with them, probably not an uncommon occurrence.  He deftly puts their story about what we know is his own death into the larger context and story of God's mighty action in their lives.  At just that juncture, they reach the village, and the stranger keeps walking as if continung his journey.  He certainly seems to have gotten some of their attention, however, if not recognition still, because they insist that he stay and join them for supper, especially since it was getting late.  They're hungry, not only for bread, but for more "word".

The stranger obliges and they sit at the table.  Perhaps they invite him, as the guest, to offer a blessing.  And Jesus "took bread, blessed and broke it, and gave it to them."  Then it happened.  The "Aha" Moment! "...their eyes were opened and they recognized him..."  The key to overcoming our pain, of transforming our memory, of allowing ourselves to get on with our lives is allowing ourselves to be led to tend to ourselves and others with love.

The stranger vanished, and by the time they acknowledged that, they could only marvel together that he had set their hearts afire as he opened the bottom line message of the Scriptures: "I am with you always..."

This story is foundational for the Church because ever since then Christians experience the Risen Lord's presence by sharing Scripture and bread-breaking, the sacred dimension for all our relationships.  Several questions occur:  1) How can you and I help others to recognize the "Aha" Moment of Jesus' constant presence? 2) How do you and I help ourselves and others to deal with our "we had hoped", whether in regard to a loved one's cancer, a divorce we are going through or have been through, war, dreams unfulfilled, love unrequited, etc.? 3) How can you and I reframe our own and others' stories in terms of God's big story for humankind? 4) Are you and I willing to greet the unexpected stranger, to walk with and accompany them equally, to break bread (literally or through Scripture) with them, to be Christ's Risen Presence to them?

Barbara Rossing says: "Resurrection is not always immediately apparent...The risen Christ may look just like any other homeless [person]." 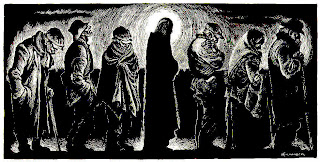