From Angles To Angels 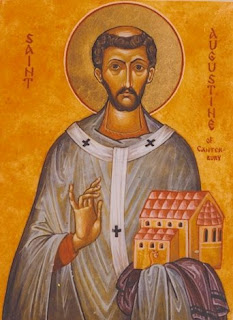 St Augustine's Abbey was a Benedictine abbey in Canterbury

Early history
When the future Pope Gregory the Great was still a monk in Rome, he saw, one day in the marketplace,  some young blond slaves for sale.  Inquiring about them, he was told that they were Angli, or “Angles” from Britain, He replied: “That would be right, for they have angelic faces, and it would be proper that such as these be companions with the angels in heaven”. When he learned that they were heathens, he lamented that “those who were so comely on the outside should have none of God’s grace within”. The experience so moved Gregory that he asked Pope Benedict I to send missionaries to preach Christianity in Britain, offering himself first. The Pope and Gregory's abbot accepted his offer, and he set out quietly for Britain with a few monks from his monastery.  The people of Rome, hearing that their former chief magistrate and advocate, Gregory, had left, raised such a commotion so that the pope sent messengers after Gregory calling him and his company back to Rome.

Fifteen years later, after he'd been elected Pope, Gregory did not forget England. In 595, he ordered his administrator in Gaul to purchase English slave-boys of 17 or 18, to be raised in Christian monasteries. The next year, he chose some 30 monks from his own monastery of Saint Andrew to go to England, among them the near-sighted librarian, Prior Augustine, whom he named as leader of the group.

In April, 597, Saint Augustine arrived in England, on the Isle of Thanet, on what might nowadays be called a revival mission. The language, among other things, proved to be a huge barrier.  The King of Kent at this time was Ethelbert, who was already aware of Christianity, as husband, since 589, to a Frankish Christian woman, Berta, who had brought her chaplain, Lúidhard, with her. Nevertheless, he was somewhat leery of these foreigners, actually meeting with them for the first time in an open field, fearing that they might cast a spell on him in an enclosed setting.  Whether or not his spouse influenced him, he provided for them a house near the market gate in his capital city of Cantwárabúrg (the modern “Canterbury”), and gave them the use of an old church dedicated to St. Martin that stood just east of the city and had been left by the Britons.  One of the main purposes of the future abbey was to serve as a burial place for the Kings of Kent and the Archbishops of Canterbury. In 978 a new larger building was dedicated by Archbishop Dunstan, to the Saints Peter, Paul, and Augustine.

The monks lived the full monastic life, witnessing to Christ mainly by their presence and piety. They spoke of the Savior to all who would hear. Finally, on June 2, 597, the eve of Pentecost, King Ethelbert abandoned his cautious attitude and was baptized. Immediately afterward, at Pope Gregory's instruction, Augustine traveled to Arles in France where he was consecrated Archbishop of the English. When he returned he found many more of the English people ready to follow their king by becoming Christians. Consequently, at Christmas that year, according to information in one of Pope Gregory’s letters, Augustine’s monks baptized as many as 10,000 converts.
In 598, Augustine sent two of his monks – Laurence and Peter – back to Rome to report on the mission. They returned in the year 600, bringing the archbishop's pallium for Augustine from the Pope, a fresh group of missionaries, and “all things needed for divine worship – sacred vessels, altar cloths, furnishings for churches, vestments for clergy, relics, and many books”. Gregory also sent practical instructions, declaring that pagan temples were not be destroyed, but were to be purified and used for Christian worship, that local customs should be retained as far as possible, with feasts of saints being substituted for heathen festivals.
Augustine assisted King Ethelbert in drafting the earliest code of Anglo-Saxon laws which survives today:  the earliest surviving piece of English prose. The Archbishop also founded a school at Canterbury and, drawing on his past experience, a substantial library.
Augustine’s last years were spent in consolidating the faith in Kent, and establishing episcopal dioceses in London, where he appointed Mellítus bishop, in Rochester, which went to Justus, and in York, for which he consecrated Paulínus.  About seven years after his arrival in England, Augustine, aware that his death was approaching, consecrated Laurence to be his successor as Archbishop of Canterbury.  Augustine died peacefully on May 26, 605.
12th-16th century

By 1100 all remains of the original Anglo Saxon building had disappeared under a massive romanesque edifice, to which an Almonry was added in 1154. Apart from some rebuilding work in 1168 as a result of a fire, the rest of the 12th century passed fairly quietly at St. Augustine's Abbey. However from about 1250 onwards the abbey was once again alive with building work. The cloister, lavatorium, and kitchen were totally rebuilt and a grand new abbot's lodging was built. The range was also extended to provide a great hall.

A new crenellated Great Gate was built in 1309 completing the Inner Court. On the north side the monks were able to take in much more land, which provided space for a new outer court with cellarer's range, brewhouse, bakehouse, and in 1320 a new walled vineyard. There was also expansion on the east side of the abbey where a series of lodgings were built along with a walled cellarer's garden. An earthquake in 1382 meant more building work, and in 1390 the gatehouse which still survives was built. The last thing to be built was a Lady Chapel, to the east of the church. By 1500 the abbey covered a very large area, and its library contained in excess of 2000 volumes, a staggering number for that time. Many of these books would have been produced in the abbey's own scriptorium.

In 1535, Henry VIII dissolved all monasteries found to have an annual income less than £100. St. Augustine's survived this first round of closures, as its income was found to be £1733. But on July 30, 1538, the abbey's fate was sealed when it fell to the dissolution by the king. The abbey was systematically dismantled over the next fifteen years, although part of the site was converted to a palace, ready for the arrival of Anne of Cleves, from France.

The palace was leased to a succession of nobles, and in the early 1600s was in the possession of Edward Lord Wotton, who employed John Tradescant the Elder, to lay out formal gardens around it. The palace is thought to have survived until a great storm in 1703, which certainly caused great damage to the already ruinous structure of the abbey.

Now a World Heritage Site, the ruins of this important monastic foundation built by Saint Augustine are in the care of English Heritage. Today the ruin precincts cover a substantial area east of Canterbury Cathedral. In fact, in its heyday, the church rivalled the nearby cathedral in size.
Posted by Harry Allagree at 12:09 PM