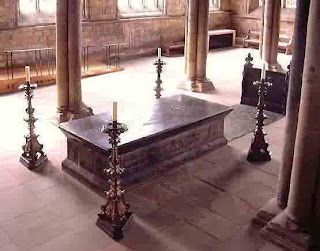 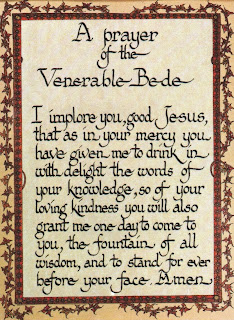 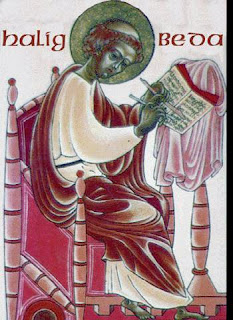 Vedi oltre fiammeggiar l’ardente spiro
d’Isidoro, di Beda e di Riccardo,
che a considerar fu più che viro.
See farther onward flame the burning breath
Of Isidore, of Bede, and of Richard
Who was in contemplation more than man.
Thus did Dante Alighieri immortalize Venerable Bede in his Paradiso, Canto X:130, the only Englishman to have thus been honored by the great Italian poet.

Bede was placed in the monastery for training as a very young child.   Throughout his life he was utterly gentle, wholly devoted to his monastic life, humble, but with a razor-sharp mind and a generous spirit. He never involved himself in politics or in controversy, did not wander about, and his holiness and wisdom came to be celebrated across Europe, both before and after his death.
Bede’s home was at Wearmouth, on the east coast of Britain, near the mouth of the River Tyne. He was born literally on the same lands which were later given by the king to build the monastery which Bede entered at the age of seven. From the time of his birth until his death at the age of sixty-two, he never traveled further than fifty or sixty miles from his place of birth. Even when he received an invitation from the Pope himself to visit Rome, he apparently never left his monastic home.

Bede was raised and trained in the monastery at Jarrow mainly by two abbots: Benedict Biscop and Ceolfrid. Abbot
Benedict, who founded the monastery, was of noble birth and of such wide learning and culture that he later had tremendous influence on the entire Church in England. He was a Greek and Latin scholar who taught theology, astronomy, art, and music. He brought back vestments and treasured furnishings for the monastery church
whenever he travelled to Rome and the Continent. He imported stone-masons and glaziers from Gaul so they could build his monastery of stone and teach their trades to the English. He even brought John the Arch-Cantor from Saint Peter’s in Rome to teach his monks the liturgical chant – something that affected the whole future of English
church music.

So Bede was raised in what was undoubtedly the finest ecclesiastical environment in the England of his day. Given the fact that Abbot Ceolfrid presented him for ordination as a deacon at the age of nineteen, apparently with special permission, (25 was the official minimal canonical age), Bede himself must have been recognized as exceptional in his own learning and his piety.   He was ordained deacon, and was priested eleven years later by Bishop John of Hexham (known to later years as Saint John of Beverley). Bede himself writes that “from the time of my receiving the priesthood until my fifty-ninth year, I…worked both for my own profit and that of my brethren, to compile extracts from the works of the venerable Fathers on holy scripture, and to make commentaries on their meaning and interpretation.”
We've been gifted with an eyewitness account of Bede’s death, written by St. Cuthbert, one of Bede’s students, whose shrine is also at Durham Cathedral, as is Bede's:  “…on the Tuesday before our Lord’s Ascension his breathing became increasingly labored, and his feet began to swell. Despite this he continued cheerfully to teach and dictate [his translation of John’s Gospel] all day, saying from time to time, ‘Learn quickly. I do not know how long I can continue, for my Lord may call me in a short while.’…The next day, Wednesday, he told us many edifying things and passed his last day happily until evening. Then the lad [who was taking his dictation] said, ‘Dear master, there is one sentence still unfinished!’ ‘Very well,’ he replied, ‘write it down.’ After a short while the lad said, ‘Now it is finished.’ ‘You have spoken truly,’ he replied, ‘It is well finished. Now raise my head in your hands, for it would give me great joy to sit facing the holy place where I used to pray, so that I may sit and call on my Father.’ And thus on the floor of his cell he chanted ‘Glory be to the Father, and to the Son, and to the Holy Spirit’, and breathed his last.”
When news of his death reached the missionary Saint Boniface, he wrote: “The candle of the Church, lit by the Holy
Spirit, has been extinguished.”

Bede’s body was laid to rest in his monastery church, but about the year 1020, a Durham monk stole the relics and brought them secretly to Durham where they were placed in the tomb along with the remains of Saint Cuthbert. In
1370, they were translated to a splendid new tomb in the Galilee Chapel of Durham Cathedral where they rest to this
day. [See photo above]

Finally, legend has it that the monk who was composing the inscription for Bede’s tomb was at a loss for a word
to fill out the couplet:

Haec sunt in fossa
This grave contains
Bedae - blank - ossa
- blank - Bede’s remains.
When he awoke the next morning, he found that an angel had filled in the blank with the word “Venerable”.

Posted by Harry Allagree at 2:54 PM