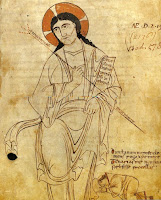 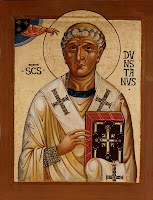 (The Bodleian library at Oxford has a Glastonbury book, ordered by Dunstan to be written, and a drawn portrait of Dunstan prostrate at the feet of Christ, probably a self-portrait.)

Dunstan of Canterbury
c. 909/10 – 988
Who is the special patron of goldsmiths, jewelers, and locksmiths??

Good guess, if you said Dunstan of Canterbury!

Now a harder question: why is he their patron?? Well, in his earlier life, while living at Glastonbury Abbey in a hermitage that was five feet long by two-and-a-half feet wide, adjoining a tiny oratory dedicated to the Mother of God, Dunstan, then an ordinary monk, began his practice of handwork: making bells, crosses, vials, censers, and sacred vestments. Among other things, he also learned to draw, to paint, to copy and illuminate books, and to play the harp, as well as to compose ecclesiastical music. Dunstan is often artistically depicted as holding the devil by the nose with a pair of tongs – based on a legend that the devil tried to tempt him once when he was working in his blacksmith shop, and Dunstan responded with the tool that was handiest! Another story has it that Dunstan nailed a horseshoe to the Devil's hoof when he was asked to re-shoe the Devil's horse, thus causing the Devil great pain. Dunstan only agreed to remove the shoe and release the Devil after he promised never to enter a place where a horseshoe is over the door. This is claimed, true or not, as the origin of the lucky horseshoe.

St. Dunstan has been called “the most famous of all the Anglo-Saxon saints”. Given what he went through in his almost 80 years of life, it seems he deserved the title. To mention only the highlights, Dunstan was suspected of sorcery, exiled by two kings, accused of treason, thrown into a cesspool, and was suspected of having leprosy. Amazingly, he
somehow survived the convoluted entanglements of kings and courtiers, politics and religion.

Born near Glastonbury, around 909, to Heorstan and Cynethryth, Dunstan was the son of a noble family closely related to the royal house. He wasn’t badly connected in Church circles either, his uncle, Athelm, being the Archbishop of Canterbury. Dunstan was educated by Irish monastic scholars, resident at Glastonbury, and who, according to him, were “excellent masters of the sciences”. Through the recommendation of his uncle, the Archbishop, he was sent to the court of King Athelstan, where he became the king’s favorite. Some jealous courtiers, who also probably couldn’t carry a tune in a wet paper bag, and who overheard Dunstan practicing Church chant, accused him of practicing incantations and wizardry, and so the king expelled Dunstan from the court. As he was leaving, his enemies further vented their jealous spite by capturing him and throwing him into a cesspool. Guess they really didn’t like his chanting!

Dunstan fled to the protection of the Bishop of Winchester, another of his uncles (the bishop of Wells was another one) who advised him to take religious vows. Dunstan held off for a time, thinking first of getting married and then suffering from a skin ailment which he believed to be leprosy. When he recovered from the disorder, he took it as a sign from God, arranged to enter the monastery at Glastonbury, received the habit, and was ordained deacon and priest by his uncle.

In 940, King Edmund succeeded to the crown. Since his palace at Cheddar was only nine miles from Glastonbury, the new king came to know Dunstan. Observing his obvious sanctity, Edmund called Dunstan back to court, and when the previous abbot died, the king named Dunstan the abbot of Glastonbury in 943. It was the major turning point in the revival of monastic life in England after the ravages of the Vikings. Dunstan introduced the Rule of Saint Benedict at Glastonbury, reconstructed the buildings, restored the church, and brought new life to Glastonbury. His example of good monastic discipline soon spread from Glastonbury to other monasteries across England where it was picked up by other reformers.

After a brief reign, King Edmund was treacherously murdered, and he was followed on the throne by his brother, Edred, who made Dunstan his chief advisor. In that position Dunstan continued his reforms of the local clergy and attempted to conciliate the remaining Danish element in the society, thus making enemies in high places.

Edred died five years later and was succeeded by his dissolute, debauched teenaged nephew, Edwy, who, finding it hard to control his raging hormones even on the day of his coronation, actually left the royal banquet for a tryst with his concubine. Abbot Dunstan followed him and sternly reprimanded his unseemly conduct on the spot. Well, that, of course, went down real well with the self-absorbed young king! In no time at all, in league with Dunstan’s enemies, Edwy saw to it that Dunstan’s property was confiscated and that Dunstan himself was exiled on an extended vacation to Flanders. In the meantime, King Edwy wreaked havoc on all the abbeys of England that had escaped the devastation of the Danes, excepting only Glastonbury and Abingdon.

Predictably, after a year, rebellion broke out in England and the north and east of the country threw off Edwy’s yoke and chose his brother, Edgar, as their ruler. King Edgar immediately recalled Dunstan, made him Bishop of Worcester. Edwy’s hard-and-fast living must’ve caught up with him because he died in 959 at the age of 20. The kingdom was reunited under Edgar who made Dunstan was the Archbishop of Canterbury and papal legate in England. Dunstan is said to have given away all his travel money to the poor on his way to Rome to receive the archiepiscopal pallium, and thereupon had to beg his own way to Rome!
Back in England, Dunstan again began restoring all the monasteries in England that had been damaged, and founded new ones. He also worked to reform the clergy, many of whom had followed Edwy’s example in living worldly and scandalous lives. If the legends surrounding Dunstan are accurate, many of the clergy learned not to mess with the holy bishop. It’s said that when some of the clergy whom Dunstan had disciplined were scheming to do him evil, a crucifix in their meeting room spoke the words: “Dunstan hath the right, and therefore trouble him no more for that matter.” Another time, when they gathered and planned to kill Dunstan, suddenly all the beams of the house slid out of their sockets and the building collapsed, killing everyone except Dunstan.

Prominent officials, as well as clergy, were subject to Dunstan’s discipline. Even King Edgar got called on the carpet for deflowering (great word!) a virgin who had intended to enter a convent, and was wise enough to submit to Dunstan’s spiritual authority. Edgar’s penance was to not wear his crown for seven years, to fast twice a week, to give alms to the poor, and to erect a nunnery in reparation for his sin. Ouch! The king humbly bore these humiliations, and when the time was up, Dunstan, in a public assembly, once more set the crown on Edgar’s head, and remained the king’s most trusted minister. After Edgar died and his son, Edward the martyr, became king for a short time, Dunstan remained as prime minister. Dunstan, in crowning Edward’s halfbrother, Ethelred, in 970, foretold the calamities that would mark his reign.

Dunstan finally left politics and returned to Canterbury where he lived a quiet, scholarly life. He loved to teach the Cathedral School students and to share with them stories of his many experiences. With great affection for him, for many years after his death the Canterbury schoolboys would pray to “sweet Father Dunstan” when threatened with corporal punishment!

On the feast of the Ascension in 988, the aged archbishop, though seriously ill, celebrated Mass, preached three times to his people, and announced to them his impending death. That afternoon he went to the cathedral and chose a place for his burial. Two days later on Saturday, May 19, 988, having received the last rites and Communion, he died peacefully in his bed. He was buried beside the high altar in Canterbury Cathedral.