Brigid: The Gaelic "Temple of God" 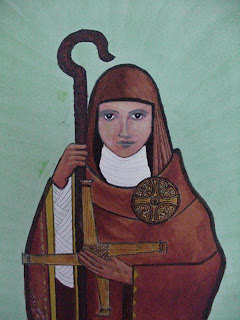 As I'm often compelled to say when dealing with many saints' lives: "I don't know if it happened this way, but I know that it's true", so also with St. Brigid [or Bride] (c. 450-525). Especially with St. Brigid! There are very few verifiable historical facts to work with in her case.
Brigid was probably born near Dundalk, on the east coast of Ireland, out of wedlock to an Irish slave girl made pregnant by her owner, Dubhthach, nobleman and court poet to King Loeghaire. She possibly grew up as a milkmaid and cowherd, possibly in bondage to Druids. It seems that she might have been converted to Christianity in her teen years and become a hermit nun in Killdura, which means "Cell of the Oak", located southwest of Dublin. She may have founded a community of hermits which later morphed into a double monastery of women and men, something common in the Celtic Church. Eventually, it seems, Brigid became the abbess. There's even a tradition that she was consecrated a bishop and wielded a good deal of influence among the other Irish bishops.
All the stories and legends about Brigid agree that she was a remarkable person in her sensitivity to and compassion for other created beings, both people and animals. Her reputation for commitment to the Lord of all creation ensured, early on, that she would have a place deep in the heart of the Irish people. She is, along with St. Patrick who may have baptized her, the patron of Ireland.
A medieval hagiography of Lismore sums up St. Brigid's character thus: "She was abstinent, she was innocent, she was prayerful, she was patient, she was glad in God's commandments, she was firm, she was humble, she was forgiving...she was a Temple of God. Her heart and mind were a Throne of Rest for the Holy Ghost..."
Whoever you are, St. Brigid, pray for us!
Posted by Harry Allagree at 12:05 PM