The Second-Choice Apostle and the Runner-Up 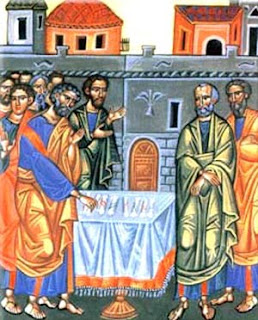 St. Matthias (d. 1st cent.), according to the Acts of the Apostles, was the apostle chosen by the gathered community of Jesus' followers and disciples to fill the vacancy of leadership among the Apostles left by Judas Iscariot after his betrayal of Jesus and suicide.

There's no mention of Matthias in the lists of disciples or followers of Jesus in Matthew, Mark, or Luke. According to Luke, writing in the first chapter of the Acts of the Apostles, Peter, in the days following the Ascension of Jesus, proposed to the assembled community of about one hundred and twenty people, that "one of the men who have accompanied us during all the time that the Lord Jesus went in and out among us...one of these must become a witness with us to his resurrection..."
Two men were then suggested as candidates: "Joseph called Barsabbas who was also known as Justus, and Matthias. Then they prayed, 'Lord, you know everyone's heart. Show us which one of these two you have chosen to take the place in this ministry and apostleship from which Judas turned aside to go to his own place.'" When they cast lots, and the lot fell to Matthias, and he was added to the other eleven apostles.

Beyond that we have no further factual information about Matthias, either from biblical or non-biblical sources. There has been much speculation and many legends put forth about Matthias' name, about where he might have exercised his ministry, what his ultimate fate was, etc. But nothing factual.
The most with which we're left, and it is considerable in itself, is the witness of Acts to the process by which a significant leader was chosen by the whole community of Jesus' followers. Everyone had a say in putting forth names of possible candidates. The one to be chosen was from among the "people", those "gathered", the ekklesia in Greek: those called forth. No managed campaigns or the angling of prominent, powerful, high-roller candidates. Just one of the family, one who'd "accompanied us", one strong in the hope which Jesus had engendered through his resurrection.
I often wonder about Joseph Barsabbas who wasn't chosen. As with Matthias, we know nothing more about him other than his name, which means son of sabbath or rest, or of return, and the fact that he wasn't elected. Luke says that he was also called Justus, a Latin name, meaning the just or righteous one. Perhaps that's a clue to his qualifications for the post.
Even though Matthias became the second-choice Apostle and though Barsabbas remained one of the community members, the fact that they were put forth as candidates at least indicates that the sizeable Christian community (for those days) saw leadership qualities in both the men which they both respected and desired.
Posted by Harry Allagree at 11:07 AM