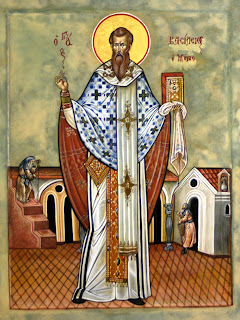 Ever go through those times, like me, of frustration with the chaotic pattern of your life?? Periodically I go through this thing of, "Now I really need to get it together...simplify my life...I need to cut back on activities and the things distracting me."


It's refreshing to read something written firsthand by a saint which shows that we have something in common, as happened this morning when I read this portion of a letter which Basil, 29 year old brainiac that he was, wrote to his friend, schoolmate, and theological buddy, Gregory of Nazianzus, later Archbishop of Constantinople. Basil had just been baptized and then ordained a deacon the year before writing this letter. After spending time in Egypt, researching the lives of desert anchorites, Basil moved back to Pontus in Cappadocia, where his sister, Macrina, had established a nunnery. Basil started gathering disciples and founded a men's monastery at Ibora. He and Gregory collaborated on writing The Longer and Shorter Rules, which became the foundation of Eastern monasticism.


With that as the context, I thought Basil's letter was rather moving:


"...What I do, day and night, in this remote spot, I am ashamed to write to you about. I have abandoned my career in the city because I am convinced that it will only make me further depressed. Within myself, I am still largely unresolved: I am like a traveller on the ocean who has never been on a voyage before and becomes ill and seasick. Such folk moan because the ship is large and has such an enormous swell, and yet the moment they transfer to a smaller boat or dinghy, they are tossed about even more and become violently ill. Wherever they go, they cannot escape from their nausea and depression. My internal state is something like this. I carry my own problems with me wherever I go and there is no escape.


So in the end, I have got very little out of my solitude. What I ought to have done, what would have helped me to walk securely in the footsteps of Jesus who has led me on the path of salvation would have been to have come here long ago. Has not our Lord said: 'If any would come after me, let them deny themselves, take up their cross and follow me?'..."


Though I've never had the pleasure of taking a sea voyage on a ship, I suspect that Basil's image of the varying degrees of seasickness, depending on the craft's size, accurately conveys the sense of the malaise and unease that everyone must feel from time to time. I remember feeling it during the seven years I struggled over the monastic vocation; again, in the early years after ordination, when doubts set in about being a priest; and even now in retirement at times, as I get older and look toward the final days of life.

Basil's letter continues, with wise advice: "...We must strive for a quiet mind. The eye cannot appreciate an object set before it if its perpetually restless, glancing here, there and everywhere. No more can our mind's eye apprehend the truth with any clarity if it is distracted by a thousand worldly concerns...Solitude offers an excellent opportunity in this process because it calms our passions, and creates space for our reason to remove their influence..." As in football, or other sports, it pays to keep one's eye "on the ball", to be constantly aware of the unum necessarium, the one thing necessary: to remain united with Christ. Therein lies truth and clarity, even if everything else around is falling apart and is in shambles. And though it's nice to be able to have the refuge and solitude of a monastery, as Basil did, for most of us that simply isn't possible. Instead, we're called to go inward, to the deep center of our inner selves, where God abides: the point vierge, as Thomas Merton calls it, the "virginal point".


As Basil puts it: "...Let there be, therefore, places such as this, where we may pursue such spiritual training without interruption, nourishing our souls with thoughts of God. After all, what can be better than to imitate the choirs of angels, to begin a day with prayer, honoring our Creator with hymns and songs? And as the day brightens, to pursue our daily tasks to the accompaniment of prayers, seasoning our labor with hymns as if they were salt?..."


Thomas Merton's well-known prayer, from his book Thoughts In Solitude, is one which best speaks to my heart in times of spiritual restlessness and confusion:

My Lord God, I have no idea where I am going.
I do not see the road ahead of me. I cannot know for certain
where it will end. Nor do I really know myself, and the fact that
I think I am following Your will does not mean that I am
actually doing so. But I believe that the desire to please You
does in fact please You. And I hope I have that desire in all that
I am doing. I hope that I will never do anything apart from that
desire. And I know that, if I do this, You will lead me by the
right road, though I may know nothing about it. Therefore I
will trust You always though I may seem to be lost and in the
shadow of death. I will not fear, for You are ever with me, and
You will never leave me to face my perils alone.
Posted by Harry Allagree at 5:00 PM