(Amphiteatre Trois Gaules, Lyons: site of the
martyrdom of St. Blandina and the Martyrs of Lyons)
As I was meditating on what it might have been like for Blandina and the others to have gone through what they did, I found myself asking what exactly might have been behind such utter courage and determination. Fr. John Julian, OJN, in his Stars In A Dark World (quite an apt title on this particular feastday!), gives a wonderful summary of the background of 2nd century persecution of Christians in the Lyons and Vienne communities and portions of the eye-witness account, possibly even from the hand of St. Irenaeus, who succeeded the then-Bishop Pothinus, one of the martyrs.

Even the details, graphic and gory as they are in the eye-witness account, probably come nowhere near the scope and reality of what these people suffered. First, they were socially outcast, "from houses, from the baths, and from the market". Then came mob violence as these followers of Christ were made scapegoats: stonings, vandalizing of their homes, insults and epithets, "and everything that an infuriated crowd loves to do to those it hates." And the cause: blatant misunderstanding and misinterpretation of what Christians believed and did. Myths. Hearsay fabrications. About cannibalism (the Eucharist), killing babies (worship of Christ the Child), incest (the ceremonial kiss of peace). Very much like today, where some people show their complete ignorance of fact as they act out their emotional rage and devastation of the work and lives of politicians, celebrities, and just plain good neighbors.
Persecution was then ramped up to the government level as Christians were called to appear in the forum for public grilling by the pagan governor's goon squad. Even an attorney of some nobility, Vettius Epagathus, who wanted to defend the accused Christians, himself became a victim when he admitted that he too was a Christian. As often happens in corrupt government inquiries, snitches, including other Christians, were brought in to testify against their brothers and sister, many of them repudiating their own membership in the Christian body.
And so it was that Bishop Pothinus, Deacon Sanctus, newly-baptized Maturus, Attalus, a faithful Church leader, Ponticus, a 15 year old boy, and Blandina, a slave whose mistress "was apprehensive lest Blandina not be able from bodily weakness to make her confession boldly". It's remarkable, perhaps miraculous, that most of the martyrs were able to physically endure the intense brutality to which they were subjected over several days. Blandina's endurance from morning to evening the first day is said to have left her torturers "faint and weary". Over and over she repeated: "I am a Christian, and nothing vile is done among us." Deacon Sanctus, suffering the application of red-hot plates to his body...several times...repeatedly replied: "I am a Christian." 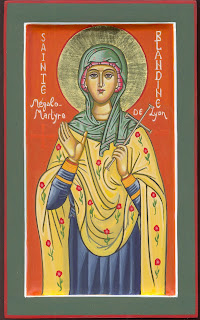 If Blandina was a slave, her life couldn't have been much of a picnic prior to this. Where did she get her spunk, her raw courage to stand up, in a man's world, and challenge wrongful authority? Did those she served try to give her aid in her trial, or did they just recede into the background of polite society and "not get involved"? How was she, a lowly slave, able to inspire her brother and sister clergy, lay people, youth, young and old, to maintain their fidelity to the Risen Christ and to his Word on which they'd all staked their very lives? We'll never know, but surely it should set us thinking about the quality of our own religious belief and commitment. Our lives, after all, Blandina and her companions in 177, and all Christians since them down to 2010, including us, are all of the same piece. Each one of us has made a deliberate commitment in Baptism to respond to the teaching and actions, "the Way", of Jesus of Nazareth. What is it that can attract that kind of devotion? What draws us and sustains us in it? What if you and I were suddenly faced with an unexpected situation like that in which Blandina and her companions found themselves?
When 90 year old Bishop Pothinus was dragged before the tribunal, he was asked: "Who is the God of the Christians?", to which he answered: "When you are worthy, you shall know." Definitely not the answer a Roman tribunal wants to hear! But very much the answer which you and I need to hear again and again, and to seriously ponder in the context of our own life as members of the Body of Christ.
"I am a Christian."  True or false?
Posted by Harry Allagree at 12:01 PM