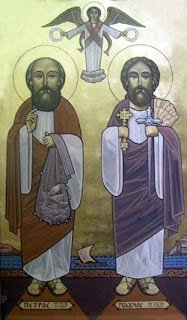 Christ, the Cornerstone, has built the Church upon apostles and prophets,
O come, let us worship. (Morning Prayer antiphon)
Lord our God, encourage us through the prayers of Saints Peter and Paul.
May the apostles who strengthened the faith of the infant Church
help us on our way of salvation...
(Collect for the Vigil of SS. Peter & Paul, Daily Roman Missal)
In his book Stars In A Dark World, Fr. John Julian, OJN says: "The tradition that Peter and Paul were martyred on the same day is probably the result, rather than the cause, of the common commemoration on June 29 (probably the date of a translation of their remains), for that shared commemoration is very ancient, going back at least to the time of Constantine." The feast itself is very ancient, one of the first included in the sanctoral cycle. Personally, I like the liturgical proper of the Roman Missal for this feast better than the readings from RCL.

The first reading is from Acts 12:1-11, recording Herod's persecution of the early Church leaders and the imprisonment of Peter. You can discern in this reading some elements of Passover. Luke mentions "the feast of Unleavened Bread" and "Passover". The phrases "on the very night" before Peter was to go to trial, and "get up quickly", "Put on your belt and your sandals": the angel's command to Peter as he was released, both hearken back to Exodus. Along with others in jail with him, Peter "not realizing that what was happening through the angel was real", experiences a night of deliverance as he passes through he iron gate and takes off down an alley. Peter is called to undergo an ordeal similar to his Lord's, as well as similar liberation. Peter is a type of the liberated person who is witness to the reality of paschal salvation in the eyes of the community.

In 2 Timothy 4:6-8; 17-18 Paul speaks passionately and soberly to his protegé, Timothy, about his sense of his impending death: "I, Paul, am already being poured out like a libation, and the time of my departure is at hand..." He speaks frankly of his having lived faithfully, "I have kept the faith...", and of his complete trust that Christ will take care of all the details of how everything from here on in unfolds. "The Lord will rescue me...and will bring me safe to his heavenly Kingdom."

What we celebrate today is a paschal mystery within the commemoration of the two great early leaders who helped form the Christian community which we know today as "the Church". Their personal martyrdoms ("witness") and liberations are all bound together with the mystery of Christ's body, the Church. Hopefully their example and teaching, as the BCP Collect for the feast says, will help us grasp and appreciate better our role within the Church. At the heart of their message is the mystery or truth of collegiality, of shared responsibility, of our need to be truly a community of concern and action. Perhaps we will even come to the point in our thinking, ultimately, of doing away with the all-too-prevalent "hierarchical pyramid". We need to appreciate that we cannot, as the Church, create unity simply by uniformity in thought and practice.

May we, after the example of our "big brothers", Peter and Paul, be earnest in prayer for the whole Church and equally earnest in boldness in sharing with others the Good News of the Living God!