"Spiritual Director To Her Generation" 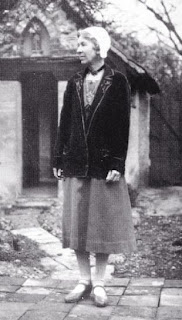 Evelyn Underhill (1875-1941) was an English Anglo-Catholic writer and pacifist who, in the English-speaking world, was one of the most widely read writers on  religion and spiritual practice, particularly Christian mysticism, in the first half of the 20th century. No other book of its type at that time met with such success as her best-known work, Mysticism (1911). She re-entered the Church of England in 1921, and soon became an acclaimed retreat conductor and spiritual guide. Her understanding of the mystery of faith is perhaps best expressed in her later book, Worship (1936).


"Worship, in all its grades and kinds, is the response of the creature to the eternal: nor need we limit this definition to the human sphere. There is a sense in which we may think of the whole life of the universe, seen and unseen, conscious and unconscious, as an act of worship, glorifying its Origin, Sustainer, and End. Only in some such context, indeed, can we begin to understand the emergence and growth of the spirit of worship in men and women or the influence which it exerts upon their concrete activities...


...It is possible to regard worship as one of the greatest of humanity's mistakes: a form taken by the fantasy-life, the desperate effort of bewildered creatures to come to terms with the surrounding mystery. Or it may be accepted as the most profound of man's responses to reality; and more than this, the organ of his divine knowledge and the earnest of eternal life..."

(From Celebrating the Saints, Canterbury Press, p. 198)
Posted by Harry Allagree at 11:27 AM