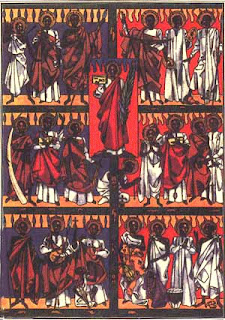 Martyrs of Uganda
When Christian missionaries, Anglican and Catholic, arrived in Buganda, it was a turning point in the religious life of the people, as well as in the political structure of the kingdom and surrounding area. All aspects of the people's lives were transformed, and, as all forms of change, brought along dislocation and discomfort. In 1884, just a few years after the arrival of the missionaries, the kingdom new ruler was Mwanga II, a youth whose ruling style was far different from that of his late father, Mutesa, particularly as it related to foreigners.
Mutesa's handled conflicting forces which impacted his court with great wisdom. The Muslim Arabs, the French or Bafaransa, as they were locally called, Catholics, and the English, or Bangereza, Protestants operated not without constraint, but with some minimal success during his reign. Mutesa allowed his people of all ranks to join any creed of their choice. The Arabs, having seen the Christian missionaries' efforts to convert the locals, also diligently started teaching Islam. As expected, a competitive struggle ensued among the preachers of the new creeds, each attempting to wield more influence and recognition among Mutesa's most influential royal court officials.  Mutesa himself never committed to any particular creed. The Muslims denounced him for his refusal to be circumcised, and he couldn't be baptized as a Christian because he refused to give up polygamy.

Christianity was received with great enthusiasm by the converts, but it required heavy demands from them: denouncing all native religious behavior and practices as heathen and satanic. One's commitment to Christianity was also a commitment to set aside the old lifestyle, adopt new alliances, adjust to new moral and religious standards, adherence, and allegiance. New Christian believers, called abasomi = readers, were thus seen as "rebels", people who had transferred their loyalty to new religious systems while abandoning old tribal traditions.

As a young prince, Mwanga had shown some respect for the missionaries, but once he became king his attitude changed. Instead of supporting missionary efforts, Mwanga now became an intolerant and vicious persecutor of Christians and of all foreigners. He was alarmed, with good cause, that the powers and authority his predecessors had enjoyed were dwindling, and that they were virtually disintegrating under the influence of the missionaries and their converts. He could no longer count on their allegiance at all costs.  The ultimate humiliation for Mwanga was the "insolence" he received from the pages when they,  the least subservient of servants,  resisted his homosexual advances. The old Bagandan tradition viewed the king as the center of power and authority. He was free to dispense with anyone's life as he felt, hence the old saying "The queen ant feeds on her subjects". Although homosexuality is abhorred among the Baganda, it was unheard of for mere pages to reject the any of the king's wishes. Mwanga, therefore, was determined to rid his kingdom of the "new" teaching and its followers.

Within a year of Mwanga's becoming king, he ordered the execution of the first three Christian martyrs, who were killed at Busega Natete on January 31, 1885. In October of 1885 Anglican Bishop James Hannington, recently dispatched to head Eastern Equatorial Africa, headquartered in Buganda, was murdered at Busoga on his way to Buganda, upon Mwanga's orders. Hannington's crime was to attempt to come to Buganda through Busoga, a shorter route than that employed by earlier visitors who took the route from south of Lake Victoria. Buganda's kings regarded Busoga as a backdoor to Buganda and thought that any one coming through the backdoor must certainly have evil intentions towards the kingdom.

Joseph Mukasa Balikuddembe, a senior advisor to the king and a Catholic convert, condemned Mwanga for ordering Hannington's death without even giving Hannington a chance to defend himself, as was customary. Mwanga was so annoyed that Mukasa would question his actions that he had him arrested and killed. On November 15, 1885, Mukasa became the first Catholic martyr, beheaded at Nakivubo. Between December, 1885 and May, 1886 many more converts were wantonly murdered. Mwanga engineered a showdown in May by ordering converts to choose between their new faith and complete obedience to his orders. Those who were unwilling would be subject to death. Courageously, the new converts chose their faith. The execution of twenty six Christians at Namugongo on June 3, 1886, was the climax of the campaign against the converts. The last person killed in the crusade was Jean-Marie Muzeeyi, beheaded at Mengo on January 27, 1887. The list of forty five known Catholic and Protestant martyrs which follows includes only those who could be formally accounted for. Many more murders went unreported and were not recorded.

Because of Mwanga's crusade to curb Christian influence and to regain the traditional and customary powers and authorities over his subjects, the situation became extremely chaotic. In the north Kabarega, king of Bunyoro Kitara, a traditional arch enemy of Buganda was fighting off the pending invasion from the Khedive of Egypt, yet keeping his eye on Buganda.  Further south the Germans were purportedly annexing territories in what is now Tanzania. Mwanga felt caught and threatened. Along with his suspicion of the missionaries, Buganda also was experiencing internal strife. The Muslims were plotting to overthrow Mwanga and replace him. Political upheavals combined with religious instability to drain the country's moral stamina. It seemed that everyone was fighting against everyone else. In the midst of the civil strife, Mwanga was briefly deposed, though he regained the throne later.


Catholic Basilica of the Martyrs of Uganda, Namungongo
Rather than deter the growth of Christianity, the martyrdom of these early believers, as happened so often in the past, seems to have been the seed of faith. Christianity, in its variety of expressions, is now the dominant faith in Buganda and Uganda as a whole. The 22 known Catholic martyrs were declared "Blessed" by Pope Benedict XV in 1920, and canonized as saints of the universal Church by Pope Paul VI on October 18, 1964, during the 2nd Vatican Council. This was a first for modern Africa and a source of great pride throughout the continent.
Posted by Harry Allagree at 2:47 PM