Christ: The C-Major of This Life 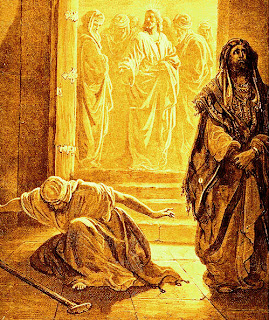 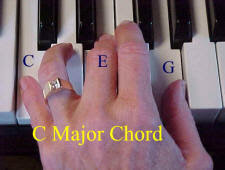 I once read the
comment of an unnamed poet who described Christ as “the C-major of this life”. C-major, as I understand it, is often thought of as the simplest key, owing to its lack of either sharps or flats. Beginning piano students' very first pieces are usually very simple ones in this key, and the first lesson at the piano is usually to learn to find middle C or C-major, since it’s the reference point from which everything else proceeds. On the other hand, as a side note, the immortal Frédéric Chopin regarded this scale as the most difficult one to play with complete evenness, so he tended to give it last to his students. He regarded B-major as the easiest scale to play on the piano, because the position of the black and white notes best fitted the natural positions of the fingers, so he often had students start with this scale.

Unless God, in Jesus the Christ, is the C-major (or B-major, for you Chopin enthusiasts!) of our life, our point of reference, everything else will be in disharmony and dissonance. Luke’s Gospel today (Luke 18:9-14) has much about which to teach us in this regard.

At the top of the pages of your Bible for Luke’s parable of the Pharisee and the publican, I think there ought to be a warning: “The Preacher General has determined that this parable can be dangerous to your religious self-esteem!” A parable is a brief, succinct story, in prose or verse, “thrown alongside”, as the Greek implies, a real-life situation so as to elicit a decision from the hearer. In this case, Luke says that “Jesus...told this parable to some who trusted in themselves that they were righteous and regarded others with contempt…” Now, engaged as all of us in the U.S. are at this election time, and, I might add, given the status of the Anglican Communion today, particularly in regard to the Episcopal Church, I hope you won’t find it too shocking or puzzling that human beings might engage in such behavior! We’re all more than familiar with the self-righteousness that credits oneself, rather than God, for one’s religious status before God. None of us are strangers to the age-old sin of idolatry, of trying to install ourselves in God’s place.

Jesus’ parable begins with two men who go to pray in the temple: a Pharisee [from perushim = the ones set apart], who belonged to a group which at various times was a political party, a social movement, and a school of thought; and a publican [from publicanus/publicani = public contractors, including tax collectors for the Romans.

The Pharisee stood and prayed in a prominent position. He addresses the Almighty with gratitude that he’s avoided becoming like so many others in his society: “thieves, rogues, adulterers, or even like this tax collector”, whom he apparently noticed in the back of the temple. He reviews for God his religious practices: voluntarily fasting twice a week, on Mondays and Thursdays, this in addition to the only prescribed fast, on Yom Kippur each year. He’s also paid tithes on all his income, a signal act of voluntary self-denial.

The “kicker” of the story is that everything this Pharisee claims for himself is good, and by-the-book! Though they were lay people, the Pharisees took upon themselves the law of priestly purity in order to become holy, as God expected Israel to become. So, one could argue that the Pharisee had reason to pride himself on being faithful and devoted, on being “right” with God.

The kind of prayer offered by the Pharisee wasn’t unusual, if you look at the 1st century Talmud, i.e., the teaching, the instruction of Judaism, contained in the collection of rabbinic discussions on all sorts of legal and religious issues. The Pharisee was aware that he owed everything to God. Notice that his prayer is a thanksgiving, not a petition. But notice also that his reference point isn’t God at all, but himself.

In Jesus’ culture, the customs taxes of a district were farmed out to the highest bidder for a fixed annual sum. Tax collectors, publicani, or publicans, often made handsome profits, since the fixed sum they were to pay to the State was lower than the actual revenues they often collected. People of the Near East despised tax collectors, not only because of the abuses of dishonesty, but mainly because these publicans were collaborators with the hated Romans, and thus worked against their own people’s welfare.

The publican in Luke’s story stands “far off”. He won’t even lift his eyes, but rather beats his breast in an expression of deepest contrition. As a publican, he was in a rather hopeless, almost despairing, situation. If he were to follow sincere repentance to its logical consequences, he would 1) abandon his profession; 2) make restitution of any fraudulent gains; and even add on an additional 15-20%, though it would’ve been well nigh impossible for this man to remember all those with whom he’d dealt in past years.

We sense that the publican’s plea for mercy, though not entirely confident, is certainly honest: it comes from deep within his soul. Though we have no way of knowing how it came to be, it’s apparent that God had become this man’s reference point, and a new beginning is already taking shape in him.

Luke concludes the story by commenting that “...this man went down to his home justified rather than the other…” He went home as one to whom God’s gracious favor was generously extended. Luke conveys the very exclusive way in which the publican was now “right” with God, whereas the Pharisee was not. That undoubtedly shocked Jesus’ hearers. The Pharisee couldn’t be faulted, at least technically. Surely Jesus’ judgment on him is unduly harsh and unfair, they might have said! And what had the publican done, really, but simply say “I’m sorry”? Is God’s righteousness and mercy that cheap?

God’s judgment and mercy are but two sides of the same coin. In the parable, judgment is given for the sake of mercy. Judgment serves the purposes of God’s favor and seeks to welcome into God’s mercy all who can accept God’s favor by casting aside any pretentiousness to their own goodness. I become healed of my separation from God, which is ultimately what sin is, when I acknowledge God as the reference point of my life and confess the self-absorption which puts distance between God and me.

Also, acknowledging and confessing my sin isn’t, in itself, the “good work” which makes me acceptable to God. My confession of sin acknowledges that there isn’t anything which I, of myself, can do to become acceptable. It’s Jesus, crucified and risen, who has already bridged the gap between God and me. All that stands between us and God who saves is our resistance, our unwillingness, to accept that bridging, done despite us, and without the help of our own virtue.

If I’m honest with myself, I’m far too ready to identify with the publican and with his humility. Blessing, rightly, goes to the “good guy”, right? And can there be any question that you and I are that?! After all, we spend a lot of time in this church, or in a church, don’t we?! If we’re brutally honest, might not our secret prayer be, “I thank you, God, that I’m not like that proud Pharisee”?

In the moment that we think such thoughts, we become aware that we’ve be “had”: Jesus’ parable has done its work, because we’re forced to look into the mirror of our own self-righteousness and to see what we’d rather not see. “I thank you, God, that I’m not like that Pharisee.” You and I can fill in for the word “Pharisee” whatever applies in our life:
- that person who’s different from me: philosophically, politically, physically, racially, gender orientationally, etc.;
- that person who’s more successful than I, or smarter, or more talented, or more popular, or who has more Facebook friends than I;
- that person who doesn’t measure up to my spiritual, doctrinal or moral standards;
- that person whose viewpoints and convictions just don’t jibe with mine.

There’s a poem which I was given on a card many years ago, which, I think, is good medicine for the unhealthy Pharisee lurking in each of us:

There’s so much that’s good in the worst of us;
So much that’s bad in the best of us.
It doesn’t behoove any of us
To talk about the rest of us.
With Christ as the C-major of our lives, you and I can honestly pray with the Psalmist (Ps 65) today:

You are to be praised, O God…
To you that hear prayer shall all flesh come,
Because of their transgressions.
Our sins are stronger than we are,
But you will blot them out…
Awesome things will you show us in your righteousness,
O God of our salvation…
Posted by Harry Allagree at 4:10 PM