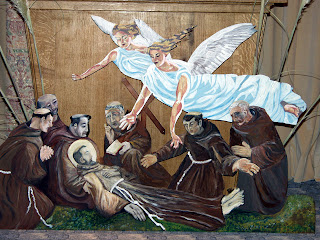 From the earliest days of the Franciscan Order, the followers of St. Francis have gathered on the anniversary of his death to celebrate his transitus, that is, Francis' passage from earthly life into everlasting life. We celebrate the light which Francis was to his world, as well as the spirit of Francis in our midst today. Inspired by Francis, we might consider how we can be light for our world.

The following readings and scripture, describe the last days and hours of St. Francis.


Readings from Thomas of Celano and St. Bonaventure:
St. Francis spent the last few days before his death in praising the Lord and teaching his companions, whom he loved so much, to praise Christ with him. He himself, in as far as he was able, broke out with the Psalm: "I cry to the Lord with my voice; to the Lord I make loud supplication." He likewise invited all creatures to praise God and, with the words he had composed earlier, he exhorted them to love God. Even death itself, considered by all to be so terrible and hateful, was exhorted to give praise, while he himself, going joyfully to meet it, invited it to make its abode with him. "Welcome," he said, "my sister death." (Celano, Second Life.)

When the hour of his death approached, Francis asked that all of the brothers living with him be called to his death bed and softening his departure with consoling words, he encouraged them with fatherly affection to love God. He spoke of patience and poverty and of being faithful to the Holy Roman Church, giving precedence to the Holy Gospels before all else. He then stretched his hands over the brothers in the form of a cross, a symbol that he loved so much, and gave his blessings to all followers, both present and absent, in the power and in the name of the Crucified. Then he added: "Remain, my sons, in the fear of the Lord and be with him always. And as temptations and trials beset you, blessed are those who persevere to the end in the life they have chosen. I am on my way to God and I commend you all to His favor." With this sweet admonition, this dearly beloved of God, asked that the book of the Gospels be brought to him and that the passage in the Gospel of St. John, which begins "before the Feast of the Passover" be read. (Bonaventure, Major Life.)


A Reading from John 13:1-17
"Now before the feast of the Passover, when Jesus knew that his hour had come to depart out of this world to the Father, having loved his own who were in the world, he loved them to the end. And during supper, when the devil had already put it into the heart of Judas Iscariot, Simon's son, to betray him, Jesus, knowing that the Father had given all things into his hands, and that he had come from God and was going to God, rose from supper, laid aside his garments, and girded himself with a towel. Then he poured water into a basin, and began to wash the disciples' feet, and to wipe them with the towel with which he was girded. He came to Simon Peter; and Peter said to him, 'Lord, do you wash my feet?' Jesus answered him, 'What I am doing you do not know now, but afterward you will understand.' Peter said to him, 'You shall never wash my feet.' Jesus answered him, 'If I do not wash you, you have no part in me.' Simon Peter said to him, 'Lord, not my feet only but also my hands and my head!' Jesus said to him, 'He who has bathed does not need to wash, except for his feet, but he is clean all over; and you are clean, but not all of you.' For he knew who was to betray him; that was why he said, 'You are not all clean.'


When he had washed their feet, and taken his garments, and resumed his place, he said to them, 'Do you know what I have done to you? You call me Teacher and Lord; and you are right, for so I am. If I then, your Lord and Teacher, have washed your feet, you also ought to wash one another's feet. For I have given you as example, that you also should do as I have done to you. Truly, truly, I say to you, a servant is not greater than his master; nor is he who is sent greater than he who sent him. If you know these things, blessed are you if you do them.'"

Finally, when all God's mysteries had been accomplished in Francis, his holy soul was freed from his body and assumed into the abyss of God's glory, and Francis fell asleep in God. (Bonaventure, Major Life.)


O God, on this day you granted the reward of blessed eternity to our blessed Father Francis;
mercifully grant that we who celebrate with tender devotion the memory of his death
may have the joy of sharing in his blessed regard.
Through Jesus Christ Your Son Our Lord, who lives and reigns with You
and the Holy Spirit, one God, for ever and ever. Amen.
(Adapted from the Liturgy for the Transitus by Ouida L. Tomlinson, SFO)
Posted by Harry Allagree at 1:24 PM