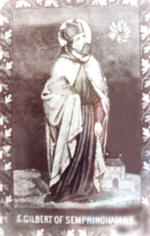 Aside from that, Gilbert was a remarkable man, on first-name basis with the great Cistercian, St. Bernard of Clairvaux and Pope Eugenius III. He also gave shelter to Thomas à Becket as he was fleeing from King Henry II. After his death, Archbishop of Canterbury, Hubert Walter, had this to say: "[Gilbert's] abstinence was wonderful, his chastity conspicuous, his prayers watchful and devout, his care for his flock eager and discreet. Meditation filled up his leisure hours, action and contemplation alternating with each other like the angels ascending and descending Jacob's ladder. An idle word rarely escaped his lips."

St. Gilbert was the first person to go through the then-new papal process of being recognized officially as a saint of the Church. Thirteen years after his death, King John, the Archbishop of Canterbury, the Bishops of London, Norwich, Bangor and Ely, the Dean and Chapter of Lincoln, three abbots and many other people petitioned the Pope that Gilbert be canonized. Pope Innocent III concurred, and canonized Gilbert a saint on January 11, 1202.  The intercession of St. Gilbert seems to have resulted in many healing miracles, and he is a great favorite for pilgrimages by the faithful to honor him.


O Eternal Savior, make us conscious of our need for your strength,
that we who venerate the renowned merits of Blessed Gilbert,
Saint and Confessor, may be your grace, and assisted by his prayers,
be delivered from all diseases of our souls, who lives and reigns,
with the Father and the Holy Spirit, one God, for ever and ever. Amen.
Posted by Harry Allagree at 11:15 PM