Parents of Mary, Grandparents of Jesus 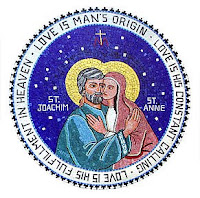 Today the Church celebrates the parents of Mary, the Mother of Jesus, the Theotokos. We really don’t know much about either St. Anne or St. Joachim, but it’s intriguing to wonder about Jesus’ “granny” and “grandpa”. We don’t even know if they were alive when Jesus was born, though the lack of mention of them in the Gospels may hint that they weren’t.

Joachim, meaning "the one whom Yahweh has set up" = Hebrew: יְהוֹיָקִים Yəhôyāqîm, was the husband of Anna and the father of Mary, the mother of Jesus, according to Roman Catholic, Orthodox and Anglican traditions. We first find them mentioned in the apocryphal Gospel of James also known as the Infancy Gospel of James, or the Protoevangelium of James, written c. 145 C.E. It expands backward in time the infancy stories found in Matthew and Luke, and tells about the birth and upbringing of Mary herself. It’s the oldest source attesting to Mary’s virginity, not only prior to but during and after the birth of Jesus. The ancient manuscripts which preserve the book list different titles: The Birth of Mary, The Story of the Birth of St. Mary, Mother of God, and The Birth of Mary.
Since the genealogies of Jesus in the Gospels of St. Matthew and St. Luke don’t explicitly name either of Mary's parents, but apparently name two different fathers for St. Joseph, one, Jacob (Mt), descended from Solomon, one, Heli (Lk), descended from Nathan, son of David, many scholars including St. John of Damascus (8th cent.) and particularly Protestant scholars, argue that the genealogy in Luke may be the family tree of Mary, and that Heli is her father. Traditions from the 7th century indicate that Heli was possibly a first cousin of Joachim.
In the legend of the Protoevangelium of James Joachim is described as a rich and pious man of the house of David who regularly gave to the poor and to the temple (synagogue) at Sepphoris. However, since Anna was barren, the high priest is said to have rejected Joachim and his sacrifice because his wife's childlessness was supposedly as a sign of God’s displeasure. Joachim consequently withdrew to the desert where he fasted and did penance for forty days. Angels then appeared to both Joachim and Anna, promising them a child. Joachim later returned to Jerusalem and embraced Anna at the city gate, a theme celebrated in a number of artistic paintings. The legends about Joachim and Anna were included in the Golden Legend and remained popular in Christian art until the Council of Trent restricted the depiction of apocryphal events. Traditional depictions of Joachim show him holding a shovel.
St. Anne (also Anna, Ann, Hanna, from Hebrew Hannah חַנָּה, meaning "favor" or "grace") of David's house and line, was the mother of Mary and grandmother of Jesus according to both Christian and Islamic traditions. Anne is not named in either the Gospels or in the Qu’ran.
Some theologians have believed either that Joachim was Anne's only husband or that she was married three times. Ancient belief, as evidenced in a sermon of St. John of Damascus, was that Anne married once. In late medieval legends, Anne was married three times, first to Joachim, then to Clopas and finally to a man named Solomas and that each marriage produced one daughter: Mary, mother of Jesus, Mary of Clopas, and Salome, respectively. The sister of St. Anna was said to be Sobe, the mother of St. Elizabeth.
Similarly, in the 4th century and then much later in the 15th century, a belief arose that Mary was born of Anne by virgin birth, a belief condemned as an error by the Catholic Church in 1677. The Church holds that Mary was conceived in the normal fashion, but that she was miraculously preserved from original sin in order to make her fit to bear Christ. The conception of Mary free from original sin is termed the Immaculate Conception, frequently confused with the Virgin Birth or Incarnation of Jesus.
Anne/Hannah is also a revered woman in Islam, and is recognized as a deeply spiritual woman and the mother of Mary. The daughter of Faqud, Hannah was said to be childless until her old age. Seeing a bird feeding its young while sitting in the shade of a tree led her to want children of her own. She prayed for a child and eventually conceived. Her husband, known as Imran in the Qur'an, is said to have died before Mary was born. Since Hannah expected the child to be male, she supposedly vowed to dedicate him to serve in the Temple. As it turned out, Hannah bore a daughter instead, and she named her Miriam/Mary. Her words after the birth of Mary reflect her status as a great mystic for Isalm.  Hannah had wanted a son, but she realized that her daughter was God's gift to her.
In writing this, I began to think of some personal associations with St. Anne, or at least her name. It was 3:40 A.M. when I came into the world in 1937 at St. Anne’s Maternity Hospital, Dayton, OH. St. Anne's was a separate unit, contiguous to St. Elizabeth's Hospital, where my Aunt Florence had taken her nurses' training. The complex had been established by the Franciscan Sisters in 1878 on Dayton's west side. Eventually the two hospitals merged, later becoming the Franciscan Medical Center which still stands today, though it has been closed as a hospital since 2000, and even, according to some, is haunted! Prior to that, new buildings went up and old ones came down over the years, but the organization remained essentially the same, making the Franciscan hospital one of the oldest in the state. The Franciscan Medical Center maintained a reputation as a hospital which gave immediate care to anyone, including the city's poor and homeless. I’m sure the Franciscan Sisters originally had a special reason for dedicating the maternity unit to St. Anne. My hunch is that the reason was their devotion to the Blessed Virgin was a major factor, as well as the connection of Anne as a mother.

In another personal connection with St. Anne, the neighborhood where my grandparents lived in Dayton, and where I, for the most part, grew up, was called St. Anne's Hill. The area was part of the original out-lots of the City of Dayton, plotted in 1815 by Daniel C. Cooper. The area apparently wasn’t settled for several decades, but by the 1830's the first documented use of the name "St. Anne's Hill" appeared in newspaper advertisements promoting the sale of nursery stock from a greenhouse in the area. Unfortunately, no explanation for the origin of the name for that area has been discovered.

During the first half of the nineteenth century, several farmsteads were built on the hill, including the area's first residence, a farm mansion, on 111 acres in 1838. It was the home of Swiss immigrant and botanist, Eugene Dutoit, who built his home with farm, orchard, vineyard and nursery on the north side of Fifth Street. That part of the hill eventually became known as "Vinegar Hill" because of the smell of ripening fruit from his orchard. His beautifully restored home, one of Dayton’s oldest residential structures, still stands at 222 S. Dutoit Street, within walking distance of my grandparents’ former home.
Another prominent resident of St. Anne's Hill at that time was William Bomberger, a German immigrant and lumber business operator who became Treasurer for the City of Dayton. He built his estate on the south side of Fifth Street. That side of the hill came to be known as "Bomberger Hill" after Bomberger’s estate was demolished in 1908 in order to make way for Bomberger Park: a huge community recreation park and swimming pool. It’s an area which recalls happy childhood memories for me. Many a day I walked down High St. to Fifth St. at the corner of which was Bomberger Park. Going west on Fifth St., I would walk to Holy Trinity School, a short distance away. In those days there were several bars along the way, and it wasn’t unusual that a few derelicts would be resting on the sidewalks!


Today St. Anne’s Hill is a remarkable and diverse neighborhood, having run the full cycle from agricultural out-land, to an ethnic core, to a flourishing streetcar community, of which I also have fond memories, and presently, to a re-gentrified historic district. It has a history of hosting diverse social and economic groups and its architecture reflects this diversity.
Posted by Harry Allagree at 3:53 PM