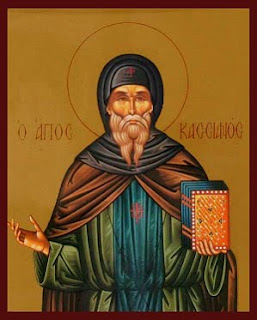 John Cassian was born c. 360, probaby in Scythia Minor, now Dobruja in modern-day Romania and Bulgaria. As a young adult, he and an older friend, Germanus, traveled to Palestine, where they entered a hermitage near Bethlehem. After about three years, they journeyed to the desert of Scete in Egypt, which was going through a time of struggle, and where they visited a number of monasteries. In c.399, Cassian and Germanus fled during a controversy provoked by Theophilus, Archbishop of Alexandria, with about 300 other monks. John Cassian and Germanus went to Constantinople, where they sought protection from the Patriarch of Constantinople, St. John Chrysostom. There John Cassian was ordained a deacon and was made a member of the clergy attached to the Patriarch while struggles with the imperial family continued. When Chrysostom was forced into exile from Constantinople in 404, the Latin-speaking John Cassian was sent to Rome to plead his cause before Pope Innocent I.


While in Rome John Cassian accepted an invitation to start an Egyptian-style monastery in southern Gaul, near Marseilles. Arriving in Marseilles around 415, he founded the Abbey of St Victor, a complex of monasteries for both men and women, one of the first in the West. It served as a model for later monastic development. Cassian's abbey and his writings influenced St. Benedict of Nursia, who incorporated many of the same principles into his famouse monastic Rule of St. Benedict. Benedict recommended to his own monks that they read the works of Cassian. Since Benedict's rule is still used by Benedictine, Cistercian, and Trappist monks, the thought of John Cassian still guides the spiritual lives of thousands of men and women in the Western Church.


John Cassian died in 435 in Marseilles. His feast day as a saint of the Eastern Orthodox Churches is celebrated on February 29, a date assigned also in the liturgical calendar of the Episcopal Church. The Roman Catholic Church also celebrates him as a saint on July 23. Like his contemporaries, St. Augustine of Hippo and St. John Chrysostom, John Cassian was never formally canonized, a process initiated several centuries after his death. Pope Urban V referred to him as sanctus (a saint) and he was included in the Gallican Martyrology. He is also honored in the Roman Martyrology on July 23. John Cassian's relics are kept in an underground chapel in the Monastery of St. Victor in Marseilles.

Holy and Mighty One, whose blessed Son Jesus Christ blessed the pure in heart:
We give you thanks for the life and teachings of John Cassian that draw us to a
discipline of holy living for the sake of your reign. Call us to turn the gaze of the
eyes of our soul always toward you, that we may abide in your love, shown to us
in our Savior Jesus Christ: who with you and the Holy Spirit is one God, living and
true, to ages of ages. Amen.
Posted by Harry Allagree at 5:16 PM