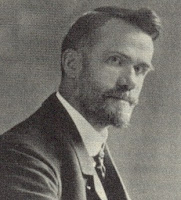 Walter Rauschenbusch (1861-1918) was a Christian theologian and Baptist minister. He was a key figure in the Social Gospel movement in the United States of America. While attending Rochester Theological Seminary, he came to believe that Jesus died "to substitute love for selfishness as the basis of human society." Known as the father of the Social Concern movement in America, Rauschenbusch's social ethic was based on not one but four complementary influences: pietism, sectarianism, liberalism, and transformationism. Walter Rauschenbusch served for eleven years as pastor of the Second Baptist Church in New York City's "Hell's Kitchen." He was a loving pastor and social prophet, and did much to "comfort the afflicted and afflict the comfortable". The religious convictions and experiences that shaped and molded Rauschenbusch and his ideas have often been ignored. "The ideal of the Kingdom of God," he said, "is not identified with any special social theory. It means justice, freedom, fraternity, labor, joy. Let each social system and movement show us what it can contribute, and we will weigh its claims."


His passion to see God's will done "on earth as it is in heaven" has inspired a large number of pastors and social reformers. The new edition of Holy Women, Holy Men (Church Publishing, 2010), which includes Rauschenbusch, Gladden, and Riis in the liturgical caldendar in conformity with the 2009 General Convention of the Episcopal Church, notes this about Rauschenbusch: "In works such as Theology for the Social Gospel (1917), Rauschenbusch enumerated the 'social sins' which Jesus bore on the cross, including the combination of greed and political power, militarism, and class contempt."

Washington Gladden (1836-1918) was a leading American Congregational church pastor and early leader of the Social Gospel movement. He was a leading member of the Progressive Movement, serving for two years as a member of the Columbus, Ohio, City Council and campaigning against Boss Tweed as acting editor of the New York Independent. Gladden was probably the first leading U.S. religious figure to support unionization of the workforce. Early on he also met W.E.B. Dubois and became an opponent of racial segregation. He was a prolific writer, with 40 books to his credit, as well as a number of hymns, including O Master, Let Me Walk With Thee.

Though not a pastor like Rauschenbusch and Gladden, Jacob August Riis (1849–1914) was a Danish American social reformer, "muckraking" journalist and social documentary photographer. He is known for using his photographic and journalistic talents to help the impoverished in New York City, who were the topic of most of his prolific writings and photography. He endorsed the implementation of "model tenements" in New York with the help of humanitarian Lawrence Veiller. Additionally, as one of the most famous proponents of the newly practicable casual photography, he is considered a developer of photography. While living in New York, Riis experienced poverty and became a police reporter for the New York Tribune, writing about the quality of life in the slums. He attempted to alleviate the bad living conditions of poor people.
These three men all have in common that they labored for social reform at the beginning of the 20th century. The Church, by including them in its liturgical calendar, wishes to call attention to and to hold up for Christians the realities and values for which they stood. Our current government officials, in all three branches: executive, legislative, and judicial, are faced with the same realities and issues, but in no way, so far, reflect the boldness, the courage, the determination, and the decisiveness of these three great reformers!
Posted by Harry Allagree at 3:18 PM