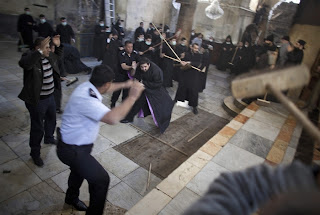 One of the Latin phrases which has stuck with me from my seminary days is the one above: "Corruptio optimi pessima" which, roughly translated means, "The corruption of what is best is the worst tragedy". What you see in the photo at the right, brawling Christian Greek and Armenian monks at the shrine of the Nativity in Bethlehem, during the very octave of the Christmas celebration of the birth of the Prince of Peace, is for me the epitome of the saying above. How did it start? It seems that it was because one of the monks sweeping with a broom got just a bit over the "boundary" of the territory of the other group of monks! Then all hell broke loose, as, unfortunately, it has done a number of other times in the past. So great is the traditional antipathy between the two groups of monks, I understand, (and I don't think it's limited to just these two groups) that the keys to the shrine are in the keeping of the Muslims!


"Disedifying" is a polite word that comes to mind for such goings-on. Bad enough that this took place in that particular sacred place and during this particular week. Even more shameful is that it took place only weeks before the annual Week of Prayer for Christian & Interfaith Unity. What in the world were these monks thinking?! As if Christianity these days doesn't have enough bad press! I hardly think that the great monastic abbas and ammas of the desert would look on such actions with anything but scorn and disappointment.


These thoughts were running through my mind as I read the excerpt from the Second Letter of John at Morning Prayer today: "The elder to the elect lady and her children, whom I love in the truth, and not only I but also all who know the truth, because of the truth that abides in us and will be with us forever: Grace, mercy, and peace will be with us from God the Fathr and from Jesus Christ, the Father's Son, in truth and love...But now, dear lady, I ask you not as though I were writing you a new commandment, but one we have had from the beginning, let us love one another. And this is love, that we walk according to his commandments; this is the commandment just as you have heard it from the beginning -- you must walk in it..."


I invite you to join me in praying for these monks, as well as for the whole human family:

Loving God, you created us in your own image
and redeemed us through Jesus your Son:
Look with compassion on the whole human family;
take away the arrogance and hatred which infect our hearts;
break down the walls that separate us;
unite us in bonds of love; and work through our struggle
and confusion to accomplish your purposes on earth;
that, in your good time, all nations and races may serve you
in harmony. Amen.
Posted by Harry Allagree at 10:12 AM

looking up corruptio optimi pessima while reading Thomas Merton's 'The Seven Storey Mountain, I find the definition and the photograph which so tragically illustrates it.

This is an example of the gang mentality which is so corrupting in all walks of life.

Merton writes so wonderfully of this in his book.

This made me laugh, because I'm here too for the same reason! I've just started reading Merton.

Me too! How wonderful! Also, I am a "Protestant" who thinks everyone should read Merton.

I, too, came across this Latin phrase while reading Thomas Merton (in Dutch, it's called Louteringsberg). Apparently all respondents were here for the same reason.

This is a good (but very sad) illustration of the phrase. But I still wonder where it originates from. Maybe it is from pope Gregorius I (The Great), according to
https://fr.wikipedia.org/wiki/Liste_de_locutions_latines_commen%C3%A7ant_par_C#Corruptissima_re_publica_plurimae_leges

but the reference is not accurate (no reference notes).

Pope Franciscus mentions it in MISERICORDIAE VULTUS the declaration of the year of misericordia, http://www.rkdocumenten.nl/rkdocs/index.php?mi=600&doc=5872&id=0&highlight=gregorius#al19

Still I didn't find proof of the Original.