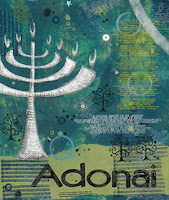 In the Masoretic Text the name YHWH is vowel-pointed as יְהֹוָה. Traditionally in Judaism, the Name is not pronounced but read as Adonai, during prayer, and referred to as HaShem, the Name,  at all other times. This is done out of hesitation to pronounce the name in the absence of the Temple in Jerusalem, due to its holiness. This tradition has been cited by most scholars as evidence that the Masoretes vowel-pointed YHWH as they did, to indicate to readers that they are to pronounce Adonai in its place. While the vowel points of אֲדֹנָי (Aḏōnáy) and יְהֹוָה (Yəhōwāh) are very similar, they are not identical.

Adon = steward, administrator, master, or Lord. The addition of ai to adon intensifies and  elevates its meaning so that it has the flavor of the ultimate Lord, the Supreme Lord, or Lord of all. In other words, it emphasizes the sovereignty and Lordship of God. That implies, therefore, that we are in relationship to God as servants. Our service is a complete surrender to God who will never ask us to do the impossible, but only what we can accomplish. To God who is Love and who loves us, we are the beloved whom he prepares and equips to serve God and others.

O come, O come, thou Lord of Might,
Who to thy tribes on Sinai's height
In ancient times did give the Law,
In cloud, in majesty and awe.
Rejoice! Rejoice!
Emmanuel shall come to thee
O Israel!
Posted by Harry Allagree at 4:33 PM