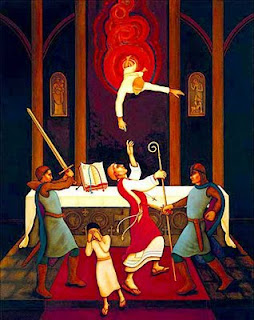 Thomas, Archbishop of Canterbury, preaches in the Cathedral on Christmas Morning, 1170:


“'Glory to God in the highest, and on earth peace, good will toward men.' The fourteenth verse of the second chapter of the Gospel according to Saint Luke. In the Name of the Father, and of the Son, and of the Holy Ghost. Amen.


Dear children of God, my sermon this morning will be a very short one. I wish only that you should ponder and meditate the deep meaning and mystery of our masses of Christmas Day. For whenever Mass is said, we re-enact the Passion and Death of Our Lord; and on this Christmas Day we do this in celebration of His Birth.  So that at the same moment we rejoice in His coming for the salvation of men, and offer again to God His Body and Blood in sacrifice, oblation and satisfaction for the sins of the whole world. It was in this same night that has just passed, that a multitude of the heavenly host appeared before the shepherds at Bethlehem, saying, 'Glory to God in the highest, and on earth peace, good will toward men'; at this same time of all the year that we celebrate at once the Birth of Our Lord and His Passion and Death upon the Cross. Beloved, as the World sees, this is to behave in a strange fashion. For who in the World will both mourn and rejoice at once and for the same reason? For either joy will be overborne by mourning, or mourning will be cast out by joy; so it is only in these our Christian mysteries that we can rejoice and mourn at once for the same reason. 'But think for a while on the meaning of this word 'peace.' Does it seem strange to you that the angels should have announced Peace, when ceaselessly the world has been stricken with War and the fear of War? Does it seem to you that the angelic voices were mistaken, and that the promise was a disappointment and a cheat?


Reflect now, how Our Lord Himself spoke of Peace. He said to His disciples 'My peace I leave with you, my peace I give unto you.' Did He mean peace as we think of it: the kingdom of England at peace with its neighbours, the barons at peace with the King, the householder counting over his peaceful gains, the swept hearth, his best wine for a friend at the table, his wife singing to the children? Those men His disciples knew no such things: they went forth to journey afar, to suffer by land and sea, to know torture, imprisonment, disappointment, to suffer death by martyrdom. What then did He mean? If you ask that, remember then that He said also, 'Not as the world gives, give I unto you.' So then, He gave to His disciples peace, but not peace as the world gives.

Consider also one thing of which you have probably never thought. Not only do we at the feast of Christmas celebrate at once Our Lord's Birth and His Death: but on the next day we celebrate the martyrdom of His first martyr, the blessed Stephen. Is it an accident, do you think, that the day of the first martyr follows immediately the day of the Birth of Christ? By no means. Just as we rejoice and mourn at once, in the Birth and in the Passion of Our Lord; so also, in a smaller figure, we both rejoice and mourn in the death of martyrs. We mourn, for the sins of the world that has martyred them; we rejoice, that another soul is numbered among the Saints in Heaven, for the glory of God and for the salvation of men.

Beloved, we do not think of a martyr simply as a good Christian who has been killed because he is a Christian: for that would be solely to mourn. We do not think of him simply as a good Christian who has been elevated to the company of the Saints: for that would be simply to rejoice: and neither our mourning nor our rejoicing is as the world's is. A Christian martyrdom is no accident. Saints are not made by accident. Still less is a Christian martyrdom the effect of a man's will to become a Saint, as a man by willing and contriving may become a ruler of men. Ambition fortifies the will of man to become ruler over other men: it operates with deception, cajolery, and violence, it is the action of impurity upon impurity. Not so in Heaven. A martyr, a saint, is always made by the design of God, for His love of men, to warn them and to lead them, to bring them back to His ways. A martyrdom is never the design of man; for the true martyr is he who has become the instrument of God, who has lost his will in the will of God, not lost it but found it, for he has found freedom in submission to God. The martyr no longer desires anything for himself, not even the glory of martyrdom. So thus as on earth the Church mourns and rejoices at once, in a fashion that the world cannot understand; so in Heaven the Saints are most high, having made themselves most low, seeing themselves not as we see them, but in the light of the Godhead from which they draw their being.

I have spoken to you today, dear children of God, of the martyrs of the past, asking you to remember especially our martyr of Canterbury, the blessed Archbishop Elphege; because it is fitting, on Christ's birth day, to remember what is that Peace which He brought; and because, dear children, I do not think I shall ever preach to you again; and because it is possible that in a short time you may have yet another martyr, and that one perhaps not the last. I would have you keep in your hearts these words that I say, and think of them at another time. In the Name of the Father, and o£ the Son, and of the Holy Ghost. Amen.”

(From Murder in the Cathedral, Interlude, by T.S. Eliot),

Posted by Harry Allagree at 9:45 AM