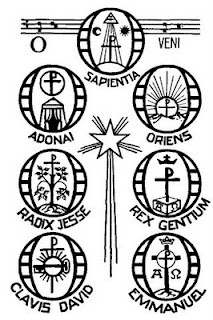 The "O" Antiphons are antiphons used to introduce the Magnificat canticle at Vespers on the last seven days of Advent.
Each antiphon is a name of Christ, one of his attributes mentioned in Scripture:


In the Roman Catholic tradition, the "O" Antiphons are sung or recited at Vespers from December 17 through December 23.
They have been traditionally used in the Church of England at Evening Prayer during this period, though not printed in the Book of Common Prayer. More recently they have found a place in primary liturgical documents throughout the Anglican Communion, including The Episcopal Church. The "O" Antiphons also occur in many Lutheran churches. In the Book of Common Worship published by the Presbyterian Church (USA), the antiphons can be read as a praise litany at Morning or Evening Prayer.


The hymn O come, O come, Emmanuel, or Veni Emmanuel, is a lyrical paraphrase of these antiphons. The first letters of the titles taken backwards form a Latin acrostic: "Ero cras" which translates to "Tomorrow, I will come", mirroring the theme of the antiphons.


The exact origin of the "O" Antiphons is unknown. Boethius (480–524/5) made some reference to them, thus suggesting their presence in his time. At the Benedictine Abbey of Saint Benedict at Fleury, now Saint-Benoît-sur-Loire, these antiphons were recited by the abbot and the other monks in descending rank, after which a gift was given to each member of the community. By the 8th century they were used in the liturgical celebrations in Rome. Usage of the antiphons was so prevalent in monasteries that the phrases "Keep your 'O'" and "The Great O Antiphons" were common parlance. One may conclude from this that the "O" Antiphons have probably been part of Western liturgical tradition since the very early Church.


The Benedictine monks arranged these antiphons purposefully. If one starts with the last title and takes the first letter of each one — Emmanuel, Rex, Oriens, Clavis, Radix, Adonai, Sapientia—the Latin words ero cras are formed, meaning, "Tomorrow, I will come." This was interpreted as a message to Christians from Jesus, whose coming they prepare for in Advent and whom they have addressed in these seven Messianic titles: "Tomorrow, I will come." Thus the "O" Antiphons not only bring an intensity to Christians' Advent preparation, but are a fitting and joyful conclusion to the season of Advent.
Posted by Harry Allagree at 8:46 PM

I've circulated this piece among all the Regulars at Julian House.