The Meeting Of The Lord 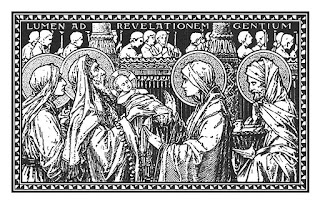 The Presentation of Jesus in the Temple, which is commemorated today, celebrates an early episode in the life of Jesus. St. Luke, in his Gospel (2:22–40), relates that Mary and Joseph took Jesus the infant to the temple in Jerusalem forty days after his birth, in order to complete Mary's ritual purification after childbirth, and to perform the redemption of the firstborn, as provided for in the Law of Moses (Leviticus 12, Exodus 13:12-15, etc.). Mothers were to offer a lamb, if means permitted; otherwise, “two doves or two young pigeons”. Joseph and Mary chose the second option of sacrifice. Leviticus 12:1-4 indicates that this event should take place forty days after birth for a male child, and so the Church’s liturgy designates February 2 for the Presentation, forty days after Christmas on December 25.


As Mary and Joseph enter the temple with Jesus, they encounter a man named Simeon. Luke describes Simeon as “righteous and devout”, noting that he had been promised that "he would not see death before he had seen the Lord's Messiah" (Luke 2:26). Simeon prays in words which we now refer to as the Nunc Dimittis, or Canticle of Simeon, which prophesied that Jesus would be “a light for revelation” to both Israel and the Gentile nations.


Simeon then says to Mary: "This child is destined for the falling and the rising of many in Israel, and to be a sign that will be opposed...and a sword will pierce your own soul too...” (Luke 2:34-35).


An elderly prophetess, Anna was also in the Temple, and began to praise to God and to speak about the infant Jesus to all who were looking for the redemption of Jerusalem (Luke 2:36-38).


In the Eastern Orthodox Church and some Eastern Catholic Churches, this feast is sometimes called Hypapante = “meeting”. Other traditional names include Candlemas, the Feast of the Purification of the Virgin, and the Meeting of the Lord. In the Roman Catholic and Episcopal Churches the Feast of the Presentation of Our Lord marks the conclusion of the season of Epiphany.


As mentioned earlier, the date of Candlemas is established by the date set for the Nativity of Jesus, and comes forty days afterwards. The Jewish Torah provided that a mother who had given birth to a male child was considered unclean for seven days. Further, she was to remain for thirty-three days "in the blood of her purification." Candlemas corresponds to the day on which Mary, according to Jewish law, would have participated in a ceremony of ritual purification. Luke relates that Mary was purified according to the religious law, followed by Jesus' presentation in the temple.


Traditionally the Western term Candlemas, or Candle Mass, referred to the practice of blessing beeswax candles on February 2, and of distributing some of them to church members for use throughout the year in their homes. In Poland the feast is called the "Holiday of the Mother of God of Thunder", referring to gromnicy, candles which were lit during thunder storms and placed in windows to ward off storms.


Within the Roman Catholic Church, since the liturgical revisions of Vatican Council II, references to candles and the purification of Mary have been de-emphasised in favor of the Presentation of Jesus in the Temple. Though it is certainly a pious fiction, according to over eight centuries of tradition, the swaddling clothes which Jesus the infant wore during the Presentation are kept and venerated in Dubrovnik Cathedral, Croatia.


The Feast of the Presentation is among the most ancient feasts of the Church. There are sermons on the Feast by 4th century bishops Methodius of Patara, Cyril of Jerusalem, Gregory the Theologian, and 5th century bishops Gregory of Nyssa and John Chrysostom. The earliest reference to specific liturgical rites surrounding the feast have been handed down to us from the travelling 4th century nun, Egeria, during her pilgrimage to the Holy Land. She reported that February 14 was a day solemnly kept in Jerusalem with a procession to Constantine I's Basilica of the Resurrection, with a homily preached on Luke 2:22, and a Divine Liturgy. This so-called Itinerarium Peregrinatio = Pilgrimage Itinerary of Egeria doesn’t, however, offer a specific name for the feast. The date she reports in Jerusalem at that time, would indicate that Christ's birth had been celebrated there on January 6.


Originally, the Feast of the Meeting of the Lord was a minor celebration. In 541 a terrible plague broke out in Constantinople, killing thousands. The Emperor of the Eastern Empire, Justinian I, in consultation with the Patriarch of Constantinople, ordered a period of fasting and prayer throughout the entire Empire. On the Feast of the Meeting of the Lord, great processions throughout the towns and villages were arranged, and a solemn prayer service to ask for deliverance from evils. The plague ceased, and in thanksgiving, the feast was elevated to a more solemn celebration in 542.


In Rome, the feast appears as early as the seventh and eighth centuries. There it carried for the first time the new title of the Feast of Purification of the Blessed Virgin Mary. Candlemas is the most ancient of all the festivals in honor of the Virgin Mary. The date of the feast in Rome was moved forward to February 2, since during the late fourth century the Roman feast of Christ's Nativity was introduced as December 25.


The feast actually spread slowly in the West. The tenth century Benedictional of St. Æthelwold, bishop of Winchester, contains a formula used for the blessing of candles. Candlemas also become important enough to find its way into the secular calendar. It became the traditional day to remove the cattle from the hay meadows, and from the field that was to be ploughed and sown in the spring. References to it are common in later medieval and early Modern literature; Shakespeare's Twelfth Night is recorded as having its first performance on Candlemas Day, 1602.

Down with the rosemary, and so
Down with the bays and mistletoe;
Down with the holly, ivy, all,
Wherewith ye dress'd the Christmas Hall
(Robert Herrick [1591–1674], Ceremony upon Candlemas Eve)
As the poem indicates, the eve of Candlemas was the day on which Christmas decorations and greenery were removed from people's homes, for traces of berries, holly, etc. will bring death among the congregation before another year is out. Another tradition holds that anyone who hears funeral bells tolling on Candlemas will soon hear of the death of a close friend or relative. Each toll of the bell represents a day that will pass before the unfortunate news is learned.


In Scotland, until a change in the law in 1991, and in much of northern England until the 18th century, Candlemas was one of the traditional quarter days when quarterly rents were due for payment, as well as the day for various other business transactions, including the hiring of servants.


In the United Kingdom, good weather at Candlemas is taken to indicate severe winter weather later: "If Candlemas Day is clear and bright, / winter will have another bite. / If Candlemas Day brings cloud and rain, / winter is gone and will not come again." It is also alleged to be the date that bears emerge from hibernation to inspect the weather as well as wolves, who if they choose to return to their lairs on this day is interpreted as meaning severe weather will continue for another forty days at least. Thus, our American tradition of “Groundhog Day”. The earliest American reference to Groundhog Day can be found at the Pennsylvania Dutch Folklore Center at Franklin and Marshall College: “Last Tuesday, the 2nd, was Candlemas day, the day on which, according to the Germans, the Groundhog peeps out of his winter quarters and if he sees his shadow he pops back for another six weeks nap, but if the day be cloudy he remains out, as the weather is to be moderate.” (February 4, 1841 — from Morgantown, Berks County (Pennsylvania) storekeeper James Morris' diary)


The Carmina Gadelica, an important collection of Scottish folklore, refers to a serpent coming out of the mound on Latha Fheill Bride, as the Scots call Candlemas. This rhyme is still used in the West Highlands and Hebrides:


“Moch maduinn Bhride, Thig an nimhir as an toll; Cha bhoin mise ris an nimhir, Cha bhoin an nimhir rium.
Early on Bride's morn, the serpent will come from the hollow. I will not molest the serpent, nor will the serpent molest me.
Thig an nathair as an toll, la donn Bride Ged robh tri traighean dh' an t-sneachd air leachd an lair.
The serpent will come from the hollow on the brown day of Bride, Though there should be three feet of snow on the flat surface of the ground.”


In France, Candlemas (La Chandeleur) is celebrated with crêpes, which must be eaten only after 8:00 PM. If the cook can flip a crêpe while holding a coin in the other hand, the family is assured of prosperity throughout the coming year.


In Italy, traditionally, La Candelora is considered the last cold day of winter.


In Tenerife, Spain, February 2 is the feast of the Virgin of Candelaria, patron of the Canary Islands.


In Southern and Central Mexico, and Guatemala City, Candlemas (Día de La Candelaria) is celebrated with tamales. Tradition indicates that on January 5, the night before the Epiphany, whoever gets one or more of the few plastic or metal dolls (originally coins) buried within the Rosca de Reyes must pay for the tamales and throw a party on Candlemas. In certain regions of Mexico, this is the day on which the figure of the infant Jesus of each household is taken up from the Nativity scene and dressed up in various colorful, whimsical outfits.


Sailors are often reluctant to set sail on Candlemas Day, believing that any voyage begun then will end in disaster. Given the frequency of severe storms in February, perhaps this makes some sense.


The third prayer of the Blessing of the Candles is a beautiful summation of the message of this feast, and gives us much upon which to reflect:


“Lord Jesus Christ, the true light, you enlighten everyone coming into this world: pour your blessing upon these candles and sanctify them with the light of your grace. Mercifully grant that as these light, enkindled with visible fire, dispel the darkness of night, so our hearts, illumined by invisible fire, that is, the brightness of the Holy Spirit, may be free from the blindness of every vice; that our mental eye may be so purified that we may perceive those things which are pleasing to you and are profitable to our salvation, so that after the dark perils of this world, we may deserve to come into that never-failing light: through you, Christ Jesus, Savior of the world, who in perfect Trinity live and reign, God, world without end. Amen.”

Posted by Harry Allagree at 9:10 AM