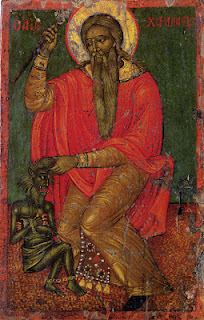 Today is the closest thing to a namesday for me that I've ever been able to figure out. A friend of mine, of Greek descent, told me some years ago that Haralampos/Charalampos, with many variations, is "Harry" in Greek. Close enough!

Haralampos apparently was a hearty soul, since he's said to have lived to age 113, then was martyred by Roman soldiers. My first reaction to that is why didn't they just let the old guy go at that age! Just put him a prison and forget about him. Apparently, though, his refusal to sacrifice to idols and his eloquent confession of his faith was more than they could handle, thus the overkill. He is said to have been mercilessly tortured and then beheaded. Military brutality indeed!

Many miracles are said to have been worked through prayer and the intercession by St. Haralampos, among them the raising up of a dead young person, and the healing of a man tormented by demons for 35 years.

The story about the latter says that when Haralampos was being tortured, the persecuting emperor, Septimius Severus, learned about his miracle-working power and ordered an insane man to be brought to Haralampos so that the emperor could be convinced that Haralampos could, indeed, heal him. The devil is said to have tormented this man for 35 years, driving him into the wilderness and hill country, and hurling him into mud or into gorges. When the deranged man finally approached Haralampos, the demon sensed a sweet-smelling fragrance emanating from the holy man and shouted: "I beg you, servant of God, do not torment me before my time, but rather command me and I will depart. If you wish, I will tell you how it came about that I entered into this man." St. Haralampos commanded the demon to tell the story. "This man wanted to steal from his neighbor," said the devil, "and thought to himself: 'If I don't kill the man first, I'll not be able to seize his goods.' So he killed his neighbor. Catching him in the act of doing so, I entered him and behold for thirty-five years I have dwelt in him." Hearing this, St. Haralampos commanded the demon to depart from the man immediately and to leave him in peace. The demon did so, and the demented man was restored to health and became tranquil.

The emperor apparently either wasn't convinced or deemed it of little importance, because Haralampos still paid the price.
Posted by Harry Allagree at 10:44 AM

Well, you have at least three more likely candidates:

1. St. Harold II, King of England - venerated as a saint by the Orthodox

3. St. Harold of Gloucester - one of those mythological English children supposedly killed by Jews as part of Passover ceremonies.