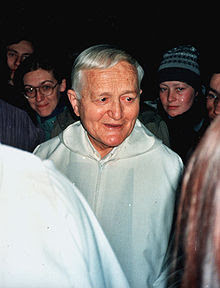 Frère Roger became a Roman Catholic a year or so before his death.

I spent several hours with him at Taizé in 1974 the middle of one of the youth gatherings—an awesome sight to see the hills around Taizé as far as one could see covered with huge army tents.That time I think there were over 15,000 young people there!

Was there a reason given for the murder and what is the status of the alleged murderer?