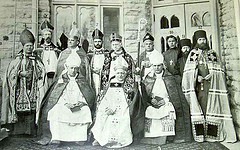 Today we celebrate the commemoration of Bishop Charles Chapman Grafton (1830-1912), Bishop of the Episcopal Diocese of Fond du Lac (1888-1912) and ecumenist. The Episcopal Church has been noted through the years for having a wide range of theological and liturgical "styles", ranging from low Evangelical to high Anglo-Catholic. The Diocese of Fond du Lac has longed been noted for its high Anglo-Catholic character. In fact, more staid wags, especially among Episcopal clergy, have often referred to it as "Fond du Lace".
Charles Grafton was one of five children, born into a family with a rich history dating back to 1636, when the Graftons came to the U.S. from Southwell, Suffolk, England. Originally, Charles studied to be a lawyer, attending Boston Latin School, then Phillips-Andover Academy. Having developed a serious problem with his eyes, he was forced to complete his secondary education at home with a tutor. In 1851 he entered Harvard Law School, receiving an LL.B. in 1853. By this time, he'd been attending the Church of the Advent in Boston, where he later became the fourth Rector, and where he began to follow the stirrings of a vocation to the priesthood, as well as a great interest in the Oxford Movement.
In 1865 he travelled to England to meet with one of the great Oxford Movement leaders, Edward Bouverie Pusey. Within a year, he co-founded the Society of Mission Priests of St. John the Evangelist, along with Richard Benson and Samuel O'Neill. The group later became known as the Cowley Fathers, from the town of Cowley where the original band lived in community. Three years later, Charles Grafton was elected bishop of the Diocese of Fond du Lac, WI, one of the smallest and poorest in the American Church. The work which Grafton did as bishop is a long record of major signifcance to the later spiritual life of the Episcopal Church. He made rich contributions to the liturgy, to the ecumenical movement, and to religious life by the founding of the Sisters of the Nativity. Unfortunately, not a lot of his fellow-bishops, clergy and people, generally in the Episcopal Church, were as enthusiastic as he was in these areas, and, understandably, he took a lot of flack through the years.
One of the most noted, and perhaps most controversial, events in Grafton's long life was the ordination of Reginald Heber Weller as bishop coadjutor on November 18, 1900, at St. Peter's Episcopal Cathedral in Fond du Lac. It's quite awesome to realize that two great later Russian saints, St. Tikhon, then Bishop of Alaska, the Aleutian Islands and North America, and St. John Kochurov, young priest and later hieromartyr in the early years of the Bolshevik Revolution in Russia, were, at Bishop Grafton's invitation, participants in the event. A large group of traditionally vested, high Church Episcopal bishops and one bishop of the Polish National Catholic Church, Prime Bishop of Old Catholics in America, Anthony Kozlowski, were present. After the service the group photo [seen above] was taken, probably the first time that high Church Episcopal bishops had been photographed in full regalia. Needless to say, it caused quite a stir throughout the Church, especially among low Church Episcopalians who considered such vesture far too "popish". The event came to be called the "Fond du Lac Circus".


Shortly before he died a peaceful death, after receiving the last rites, Bishop Grafton woke suddenly and cried out: "Glory! Glory! I have seen the Lord and he turned and embraced me!" Fr. John Julian, OJN, says of this extraordinary servant of God: "It can be said without qualification or question that this one man holds the principal responsibility for permanent and earth-shaking changes in the Episcopal Church. A major portion of the practice and teachings that are now universally normative in the Church can find their origins in the life and work of Charles Chapman Grafton and his disciples." (Stars In A Dark World, p. 475)