A Sentinel For the People 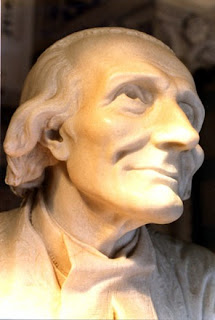 Father of mercy,
you made St. John Vianney outstanding
in his priestly zeal and concern for your people.
By his example and prayers,
enable us to win our brothers and sisters
to the love of Christ
and come with them to eternal glory.
The liturgy for the commemoration of John Vianney includes two very apropos readings: Ezekiel 3:17-21 and Matthew 9:35-10:1. God speaks to the prophet in the first reading: "Mortal, I have made you a sentinel for the house of Israel; whenever you hear a word from my mouth, you shall give them warning from me..." Translating this to the responsibility which any spiritual leader bears toward the people s/he is called to serve, one almost fairly trembles at hearing this. If nothing else, it's a vivid reminder to a leader to keep his/her spiritual house in order, to do ministry selflessly, i.e., so that God may be honored in all things, and for the avowed purpose of enabling others to experience "the love of Christ".
John Vianney (1786-1859) was born in Dardilly, near Lyons, France, ordained a priest in 1815 in Grenoble, after miserably failing his pre-ordination tests, and after tutoring by which he was just able to pass. In 1818 he was assigned to the parish at Ars, a neglected, run-down, outback church with unruly, lukewarm members. He stayed at Ars for the rest of his life. He exemplified in his own person Matthew's description of Jesus in the Gospel: "When he saw the crowds, he had compassion for them, because they were harassed and helpless, like sheep without a shepherd..." Through loving care of the people, prayer, personal sacrifice, and tireless dedication to the sacrament of Penance, which eventually drew thousands of penitents to his confessional, St. John Vianney created a true center of "the love of Christ". Aside from the hours, most of his day, which he spent hearing peoples' confessions and reassuring them with words of forgiveness and peace, he spent the rest of his time praying before Christ in the Blessed Sacrament. He himself characterized these times as simple conversations with Jesus, when he would look at Jesus and Jesus would look back at him in love.


On August 4, 1859, John Vianney died at age 73. Biographers record a number of miracles performed throughout his life. He seems to have had supernatural knowledge of the past and future, and healing powers for the sick, especially children. On October 3, 1874, Pope Pius IX proclaimed him Venerable; on January 8, 1905, Pope Pius X declared him Blessed and proposed him as a model for parochial clergy. In 1925 Pope Pius XI canonized him a Saint, and in 1929 St. John Vianney was designated as the patron saint of parish priests.
Posted by Harry Allagree at 1:30 PM