Christ Transfigured: The Hope of Glory 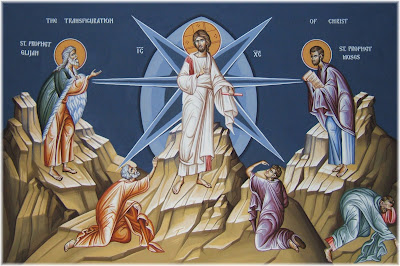 From a sermon of St. Leo, Pope, On the Transfiguration

"The Lord displays His glory, therefore, before chosen witnesses, and invests that bodily shape which He shared with others with such splendour, that His face was like the sun's brightness and His garments equalled the whiteness of snow.


And in this Transfiguration the foremost object was to remove the offense of the cross from the disciple's heart, and to prevent their faith being disturbed by the humiliation of His voluntary Passion by revealing to them the excellence of His hidden dignity. But with no less foresight, the foundation was laid of the Holy Church's hope, that the whole body of Christ might realize the character of the change which it would have to receive, and that the members might promise themselves a share in that honour which had already shone forth in their Head. About which the Lord had Himself said, when He spoke of the majesty of His coming, 'Then shall the righteous shine as the sun in their Father's Kingdom' (Matthew 13:43), while the blessed Apostle Paul bears witness to the self-same thing, and says: 'for I reckon that the sufferings of this time are not worthy to be compared with the future glory which shall be revealed in us' (Romans 8:18): and again, 'for you are dead, and your life is hid with Christ in God. For when Christ our life shall appear, then shall you also appear with Him in glory' (Colossians 3:3). But to confirm the Apostles and assist them to all knowledge, still further instruction was conveyed by that miracle.


For Moses and Elias, that is the Law and the Prophets, appeared talking with the Lord; that in the presence of those five men might most truly be fulfilled what was said: 'In two or three witnesses stands every word' (Deuteronomy 19:15). What more stable, what more steadfast than this word, in the proclamation of which the trumpet of the Old and of the New Testament joins, and the documentary evidence of the ancient witnesses combine with the teaching of the Gospel? For the pages of both covenants corroborate each other, and He Whom under the veil of mysteries the types that went before had promised, is displayed clearly and conspicuously by the splendour of the present glory. Because, as says the blessed John, 'the law was given through Moses: but grace and truth came through Jesus Christ' (John 1:17), in Whom is fulfilled both the promise of prophetic figures and the purpose of the legal ordinances: for He both teaches the truth of prophecy by His presence, and renders the commands possible through grace.


The Apostle Peter, therefore, being excited by the revelation of these mysteries, despising things mundane and scorning things earthly, was seized with a sort of frenzied craving for the things eternal, and being filled with rapture at the whole vision, desired to make his abode with Jesus in the place where he had been blessed with the manifestation of His glory. Whence also he says, Lord, it is good for us to be here: if you will let us make three tabernacles , one for You, one for Moses, and one for Elias. But to this proposal the Lord made no answer, signifying that what he wanted was not indeed wicked, but contrary to the Divine order: since the world could not be saved, except by Christ's death, and by the Lord's example the faithful were called upon to believe that, although there ought not to be any doubt about the promises of happiness, yet we should understand that amidst the trials of this life we must ask for the power of endurance rather than the glory, because the joyousness of reigning cannot precede the times of suffering."
Posted by Harry Allagree at 8:01 PM