Witnesses to Faith In South America 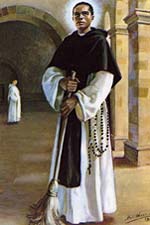 Born in Lima, Peru, in 1579, Juan Martin de Porres was the illegitimate son of a Spanish nobleman and a young black Panamanian former slave. Because he had his mother's dark skin, his father abandoned the family. Some "nobleman", indeed! Martin's sister, Juana, was born three years later in 1581. Victims of poverty, his mother wasn't able to support him and his sister. Martin was entrusted to a primary school for two years, then placed with a barber/surgeon in order to learn the medical arts. Even at only 10 years old, he already saw to the needs of others, at the same time earning his keep. Already he was spending hours of the night in prayer, a practice which increased rather than diminished as he grew older. At age 15 he applied to the Dominicans to be a lay helper. Received as a tertiary, he was employed as a servant, then as almoner in the Order which at that time had racial barriers against people of color. In his early 30's his superiors lifted the racial ban because of his faithfulness, and Martin took vows as a Dominican in 1603, clothed as a Coadjutor Brother. He was placed in charge of the infirmary, where he would serve until his death at the age of 60, and he became known for his tender care of the sick and for unusual cures. During epidemics, Martin, and even his sister, Juana, saw to the needs of those afflicted. During normal times, Martin fed as many as 160 people a day and distributed substantial alms to the poor and needy. He was a friend of St. Juan Macías, another Dominican lay brother who later evangelized in Peru, and St. Rosa de Lima (see below) who shared his passion for the sick and poor. Martin died in 1639 and was canonized a saint in 1962 by Blessed Pope John XXIII. He is considered the patron of people of mixed race,  innkeepers, barbers, and public health workers. 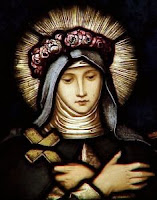 The first saint proclaimed in the Americas, Rosa de Lima, was born in 1586 in the city of that name, the daughter of Gaspar Flores, a cavalryman originally from Puerto Rico, and Maria de Oliva, a native Peruvian. Christened Isabel (Elizabeth), her nickname "Rosa" is attributed to the fact that, when she was a baby, a servant claimed to have seen her face transform into a rose. In 1597 she was personally confirmed by the Archbishop of Lima, Toribio de Mongrovejo (see below), also later a saint. She formally took the name of Rosa at that time. Devoted as she was as a young girl to the Dominican, St. Catherine of Siena, Rosa began to fast and do penance in secret.  Rosa was exceedingly beautiful and, because of  her family’s fading fortunes, she feared being married off to a wealthy  man in exchange for her dowry. Not wanting this to happen, Rosa, against the objections of her friends and her family, cut off her hair and disfigured her face with pepper and lye. In order to contribute to her family’s upkeep, Rosa took in sewing and served as a gardener. Her exquisite lace and embroidery also helped to care for the poor, while her nights were devoted to prayer and penance in a little grotto which she had built. She spent many hours contemplating the Blessed Sacrament, which she received daily. She was determined to take a vow of virginity, in opposition to her parents who wished her to marry. Finally, out of frustration, her father gave her a room to herself in the family home. Out of her prayer grew a strong desire to do works of mercy for the poorest of the poor, particularly for Indians, slaves, and others on the margins of society. She wanted to become a nun, but her father refused to allow this. Out of obedience to him, she entered the Third Order of St. Dominic instead, remaining in her parents' home. When Rosa was 20 she donned the habit of a tertiary and took a vow of perpetual virginity. She continued her life of prayer, penance and endured suffering for eleven years, with intervals of ecstasy, until she died in 1617, at the age of 31. She was canonized a saint by Pope Clement X in 1671, and became the patroness of native Indian people of the Americas, of gardeners, of florists, of Lima and of Peru, of the New World, of the city of Santa Rosa, CA, and of Sittard, The Netherlands, of India, and of the resolution of family quarrels. A park is named for her in downtown Sacramento, CA. A plot of land at 7th and K streets was given to the Roman Catholic Church by Peter Burnett, first governor of California. Father Peter Anderson built the first of two churches in the diocese to be consecrated in honor of St. Rose of Lima. 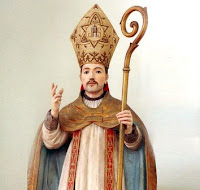 Toribio Alfonso de Mongrovejo or Turibius of Mongrovejo was a Spanish judge of the court of the infamous Spanish Inquisition and missionary Archbishop of Lima. Born in Spain in 1538, in Mayorga de Campos, Valladolid, Spain, of a noble family, he was highly educated in law and theology. Toribio became professor of law at the highly reputed Universidad de Salamanca. His reputation for learning and virtuous living led to his appointment as Grand Inquisitor of Spain by King Philip II on the Court of the Inquisition at Granada. Around this time, the Archdiocese of Lima, Peru, needed a new leader and Toribio was chosen. He objected because he was a layman, but he was overruled, and was ordained a priest and a bishop. Arriving in Peru in 1581 as Archbishop, at Paita,  600 miles from Lima, he began his mission work by travelling to Lima on foot, baptizing and teaching the natives. He often repeated: "Time is not our own, and we must give a strict account of it." He is said to have traversed the 180,000 square miles of his diocese three times, generally on foot, frequently defenceless and often alone; exposed to tempests, torrents, deserts, wild animals, tropical heat, fever and sometimes threats from hostile tribes. Confronted with the worst of colonialism, Toribio fought injustice in both the church and civil society. It is said that he baptized and confirmed nearly a million souls. Among his flock were St. Rosa de Lima and St. Martin de Porres. He built roads, schoolhouses, chapels, and convents. He founded many churches, religious houses, and hospitals, and, in 1591, founded the seminary at Lima, the first in the Western hemisphere. He also inaugurated the first part of the third Lima Cathedral in 1604. Toribio was seen as a champion of the rights of the natives against their Spanish masters. "There was great opposition to Turibius from the governors of Peru whose authority he challenged," Elizabeth Hallam writes. "He learned local dialects so that he could communicate with–-and convert–-the native peoples, and he was a strong and effective champion of their rights." At Pacasmayo he contracted fever, but continued his ministry to the end, arriving at Saña in a dying condition. Dragging himself to the sanctuary he received Communion for the last time, and died shortly afterwards on March 23, 1606. He was canonized a saint by Benedict XIII in 1726.
Posted by Harry Allagree at 8:39 PM