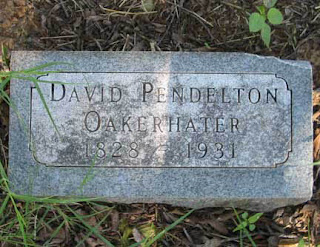 “God’s Warrior” is an epithet by which David Pendleton Oakerhater (b. 1847; the date on the picture above appears to be inaccurate) is known among the Cheyenne Indians of Oklahoma. The title is an apt one, for this apostle of Christ to the Cheyenne was originally a soldier who fought against the United States government with warriors of other tribes in the disputes over Indian land rights.

Having gone through many sufferings and indignities as a Native American, after being imprisoned by the U.S. Army, David became an Episcopalian in 1878, and was ordained a deacon in June, 1881. Sent to minister in Oklahoma among the Cheyenne, Oakerhater was instrumental in founding and operating schools and missions. Again, he endured great personal sacrifice, inconvenience, and suffering because of the apathy of Church leaders, and because of resistance from the U.S. government. He continued as a deacon, educator, and pastor among his people until his death on August 31, 1931. Many years before, the young deacon had told his people: “You all know me. You remember when I led you out to war I went first, and what I told you was true. Now I have been away to the East and I have learned about another captain, the Lord Jesus Christ, and he is my leader. He goes first, and all he tells me is true. I come back to my people to tell you to go with me now in this new road, a war that makes all for peace.”


O God of unsearchable wisdom and infinite mercy, you chose a captive warrior,
David Oakerhater, to be your servant, and sent him to be a missionary to his own people,
and to exercise the office of a deacon among them: Liberate us, who commemorate him today,
from bondage to self, and empower us for service to you and to the neighbors
you have given us; through Jesus Christ, the captain of our salvation;
who lives and reigns with you and the Holy Spirit, one God, for ever and ever. Amen.
Posted by Harry Allagree at 2:27 PM