Apostle To The Southern Picts 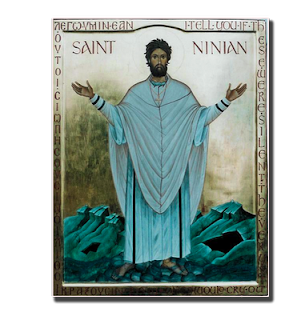 The earliest mention of Ninian of Whithorn is in a short passage of The Ecclesiastical History of the English People by the Northumbrian monk, Bede, in c. 731. The 9th-century poem Miracula Nyniae Episcopi records some of the miracles attributed to him. A Life of Saint Ninian (Vita Sancti Niniani) was written around 1160 by Aelred of Rievaulx, and in 1639 James Ussher discusses Ninian in his Brittanicarum Ecclesiarum Antiquitates. These sources of information about Ninian of Whithorn all provide seemingly innocuous personal details about his life. However, there is no unchallenged historical evidence to support any of their stories, and all of which probably had political and religious agendas.


Tradition has it that Ninian had studied in Rome; that he established an episcopal see at the Candida Casa ("white house") in Whithorn, named after St. Martin of Tours; that he converted the southern Picts to Christianity; and that he's buried at Whithorn. Variations of the story say that his father was a Christian king, and that he was buried in a stone sarcophagus near the altar of his church. Further variations assert that Ninian left for Ireland and died there in 432.

The Venerable Bede's information about Ninian is minimal and he doesn't claim it as fact. He asserts only that he's passing on "traditional" information. This first historical reference to Saint Ninian is given by Bede in a passing reference contained in the final part of a single paragraph. Bede says that Ninian was a Briton and was instructed in Rome; that he made his church of stone, which was unusual among the Britons; that his episcopal see was named after St. Martin of Tours, [whom he may or may not have met]; that he preached to and converted the southern Picts; that his base was at "hwit ærn", Old English for the Latin candida casa = white house which was in the province of the Bernicians; and that he was buried there, along with many other saints.