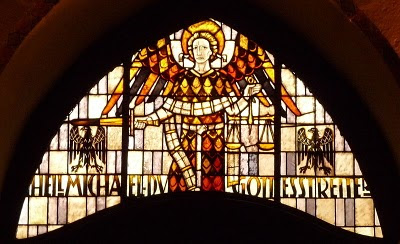 Today is Michaelmas: the feast of St. Michael the Archangel, or the Feast of St. Michael and All Angels. Michael is a given name that comes from the Hebrew: מִיכָאֵל / מיכאל‎ (Mikha'el), derived from the Hebrew question: "mi kəmo ʔelohim", meaning "Who is like God?"
The Letter to the Hebrews notes: "Are not all angels spirits in the divine service, sent to serve for the sake of those who are to inherit salvation?" I am still unabashedly and avowedly one of those quaint remnants from the medieval Catholic tradition who believes not only in angels, but also in angel guardians for each of us. A late dear friend of mine, was convinced that even every parish church has an angel guardian. I obviously don't and can't know the name of my personal angel guardian, but, nevertheless, have vaguely sensed a "presence" from my earliest days, and have been spared enough times in situations where I could've been seriously harmed had it not been for the presence and influence of a being superior to me. That isn't in any way not to acknowledge God's presence always, but this angelic presence is something slightly different. I have know idea how many other folks might or might not share this conviction.
Western Christianity celebrates Michaelmas on September 29 in the Church calendar. The Eastern Orthodox Churches do not observe Michaelmas, but rather honor the Archangels on November 8 instead. Because it falls near the equinox, it's associated in the northern hemisphere with the beginning of autumn and the shortening of days. St. Michael is considered the greatest of all the Archangels or principal angels, who also include Gabriel, Uriel, and Raphael. Michael is honored for overcoming Lucifer, as is alluded to in the Book of Revelation. Angel = ἄγγελος (pronounced ángelos in Greek) = messenger. God's messengers can be visible or non-visible, in human or non-human forms. Archangel Michael is seen as a protector against the darkness of night, and as the administrator of cosmic intelligence.

Everlasting God, you have ordained and constituted in a
wonderful order the ministries of angels and mortals:
Mercifully grant that, as your holy angels always serve and
worship you in heaven, so by your appointment they may
help and defend us here on earth; through Jesus Christ our
Lord, who lives and reigns with you and the Holy Spirit, one
God, for ever and ever. Amen.
Posted by Harry Allagree at 5:22 PM

I, too, have a guardian angel; his name is Nathanial (I named him when I was about 11)