"The Quality of Mercy" 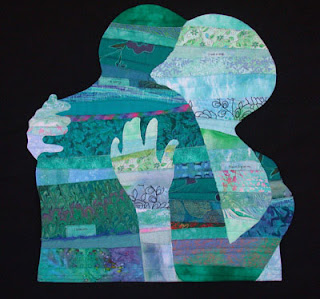 "The quality of mercy is not strain'd,
It droppeth as the gentle rain from heaven
Upon the place beneath: it is twice blest;
It blesseth him that gives and him that takes:
'Tis mightiest in the mightiest: it becomes
The throned monarch better than his crown;
His sceptre shows the force of temporal power,
The attribute to awe and majesty,
Wherein doth sit the dread and fear of kings;
But mercy is above this sceptred sway;
It is enthroned in the hearts of kings,
It is an attribute to God himself;
And earthly power doth then show likest God's
When mercy seasons justice...
Though justice be thy plea, consider this,
That, in the course of justice, none of us
Should see salvation: we do pray for mercy;
And that same prayer doth teach us all to render
The deeds of mercy..."
( Portia, in Shakespeare's The Merchant of Venice, 1596)

It can't be by accident that the liturgy's readings referring to forgiveness, both last week and this week, bookend today's 10th anniversary of 9/11. "Forgive your neighbor the wrong he has done...then your sins will be pardoned when you pray..." (Sirach 28:2)  "...how often should I forgive?...Jesus said...'Not seven times, but seven times seventy times..." (Matthew 18:21-22)
Those messages of peace, forbearance, and forgiveness are a description of our mission as the Church. A valid theology of mission, of being "sent" out, simultaneously affirms both that the riches brought to the human family in Jesus are meant to be shared by all, and that religious traditions which know nothing of Jesus, but have brought so many people to spiritual maturity and fulfillment, are genuine paths to salvation, not meant for eradication.
It's been drummed into most of us that the Church's mission is expressed in Matthew and Mark in the so-called Great Commission, a term not coined by by or used by Jesus. Unfortunately, it expresses a mission of conquest, not unsimilar to the political agendas being pushed forward today by Republican presidential candidates.
The Gospel of John, on the other hand, speaks of the Church's mission and ministry in much different terms. The basis of John's Gospel isn't power and authority invested in the disciples by Jesus, but rather Jesus' peace, breathed into them, even as God breathed life into us humans in the beginning. The Church's mission isn't, in the words of Sister Sandra Schneiders, IHM of Santa Clara University, "to succeed Jesus by making disciples, baptizing in the name of the Trinity, and teaching Jesus' message, but to carry on Jesus' own mission as the Lamb of God who takes away the sins of the world...by forgiving sins and holding fast in communion those who are thus reconciled with God..."


In John's Gospel Jesus shows how this mission is to be translated into ministry by washing his disciples' feet, ministering to his disciples as friends and urging them to do the same to one another, thus demonstrating a love which is truly that of Godself. Jesus prays, not only for his disciples, but also for all who will believe in him through their word. In that way, they will all be one "as you, Father, are in me and I in you, that they also may be in us, that the world may believe that you sent me." (John 17:20-21) The Church is "sent" to live, in Sister Sandra's words, "...the community life of friends in equality and mutual service, which will draw others to seek the source of that life and to desire to share in it..." Clearly, you and I are "sent", not to conquer, but to share Jesus the Word of Life and to offer one another the forgiveness, mercy and reconciliation which Jesus himself offers us, thus drawing us into a communal way of living which, John says, is the very life Jesus shares with his Father and with us through the Spirit of Love.


The Church's commission, according to St. John, doesn't speak of going out to overwhelm and strong-arm nonbelievers for Christ or for any other cause. It emphasiszes, to quote Sister Sandra, "...a ministry of presence rooted in the kind of community that can only derive from the inner life of the Trinity itself. It is a preaching by being, being together..." -- reaching out in forgiveness, mercy and friendship, accepting the other as other. "...There is, or should be," Sister Sandra continues, "no moral or religious price tag..." on our ministry. Our task is simply to extend to others the love that binds the community of the Church itself, the love of the Crucified and Risen Jesus, the Wisdom of God.


Forgive is a rich word. It means that the God of mercy "fore-gifts" us, that God is way out ahead of us even at our worst, even in our moments of selfishness and sinfulness. God in Christ is always the One who takes the initiative, is already present in and through our weakness, preparing us for the time when, if we choose it, we'll again be able to rise above our selfishness. At the heart of understanding what it is to forgive is realizing that I do so not because I'm expected or told to do so, or because it's somebody's "nice idea", but because I myself have experienced and am aware of the gracious forgiving presence of Jesus. Because of that I now wish to share that with someone else, whether another person, a group, an ethnic entity, or a nation who's offended me.


Ask yourself this question: how many times in a day, a week, a month, a year, do I say the Lord's Prayer? Before ever saying that prayer again, it might be well for you and me to consult a lawyer! Do you and I have even an inkling of the terrifying commitment and responsibility which we're taking on ourselves in praying that prayer? You and I ask to be forgiven by Godself in exactly the measure that you and I DO forgive another, and AS we forgive another! Perhaps we need only think back just over the past week: to our thoughts and words about other people, other groups, other races, other nations -- them. In praying the Lord's Prayer are we calling down a blessing upon ourselves, or a curse?


Revenge is often said to be "sweet". But if you and I are honest, we know that of all the fruits revenge is ultimately the most bitter, the most poisonous, the most deadly, of all. "Vengeance is mine, says the Lord; I will repay...", the author of Deuteronomy reminds us. Sirach says "...The vengeful will face the Lord's vengeance..."


That people or groups of people have faults and sins, or that they often perpetrate ugliness and evil beyond any of our expectations can never become a reason to stop loving them or to begin hating them. It should, rather, be the occasion for us to offer forgiveness, mercy and love even more, difficult as that will be. Corita Kent writes: "...we must be more careful about stamping out evil or hating anything because we know that in the past and in the present many people and things have been tragically destroyed in the name of good. We are reminded of Rilke's words to the young poet, 'Evil may be not seeing well enough', so perhaps to become less evil we need only to see more, see what we didn't see before...things look different to different people depending on where they stand, and if we can share views, not convert others to our views, we would get a larger vision. No single group can do it alone; the job is too big and we can only make it if we work it out together, and this is true on a worldwide scale, that if we're not going to find a way to work it out together, the whole thing is going to come apart..."