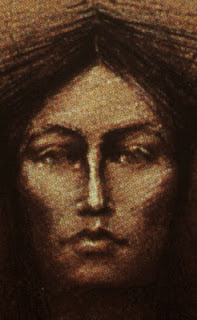 Mary Brant (Konwatsi'tsiaienni = "Someone Lends Her a Flower" or Degonwadonti = "Two Against One") was a Mohawk woman who became known in the era of the American Revolution. Few facts are known about her early life. Named Mary, but commonly known as "Molly", she was born around 1736, possibly in the Mohawk village of Canajoharie, or perhaps further west in the Ohio Country. Her parents were Christian Mohawks, possibly named Margaret (Cannassware) and Peter. Joseph Brant (Thayendanegea), born in 1743, was Molly's brother or half-brother, and became an important Mohawk leader.


The Mohawk are one of the Six Nations of the Iroquois League. At the time of the American Revolutionary War, they lived primarily in the Mohawk River valley in what is now upstate New York. At some point, either before or after her birth, Molly's family moved west to the Ohio Country, which was used as an Iroquois hunting ground. After Molly's father died, her family moved back to Canajoharie. In 1753, Molly's mother married Brant Kanagaradunkwa, a Mohawk sachem of the Turtle clan. Possibly to reinforce their connection to Brant Kanagaradunkwa, a prominent leader, Molly and Joseph took their stepfather's name as a surname, an unusual choice for that time.

Molly Brant was raised in a Mohawk culture that was highly anglicized. In Canajoharie, the Brants lived in a substantial colonial-style frame house, used many European household goods, and attended the Church of England. Though Molly was fluent in Mohawk and English, it's not clear whether she was formally educated or whether she could read or write. A letter from 1782 is signed with "her mark", indicating that she may have been only semi-literate.
In 1754, Molly accompanied her stepfather and a delegation of Mohawk elders to Philadelphia, and then to Albany, where the men were to discuss a fraudulent land sale with colonial leaders. When General Sir William Johnson, the influential British Superintendent for Northern Indian Affairs, visited Canajoharie, he would stay at the house of his friend, Molly's stepfather, Brant Kanagaradunkwa. Johnson and Molly Brant became intimate, and in September, 1759, she gave birth to a son. Later, in Johnson's will, Molly is referred to as his "housekeeper", which at the time meant that she ran the household, served as hostess, and supervised the female servants and slaves. According to the historian Barbara Graymont, "Mary Brant presided over Johnson's household with intelligence, ability, grace, and charm, and she effectively managed the estate during Johnson's many and prolonged absences." Johnson and Brant's relationship was public, and Johnson used his connection with Brant to further his public and private dealings with the Iroquois. Brant's role as Johnson's domestic and political partner was well known. They lived together at Fort Johnson, and then at Johnson Hall after 1763. She became effectively Sir William's common-law wife or consort.
The couple had nine children together, eight of whom lived past infancy. William Johnson died in July 1774. In his will he left land, money, and slaves to Brant and her children. Molly and her family returned to Canajoharie where she lived a comfortable life in a large house, and prospered as a trader.
Brant supported the British Crown during the American Revolutionary War. From her home in Canajoharie, she provided food and assistance to Loyalists who were fleeing from New York to Canada. Despite harassment from local Patriots, she remained at Canajoharie for the first two years of the war.
A turning point came in 1777 when British forces invaded New York from Canada and laid siege to Patriots in Fort Stanwix. In August, when Brant learned that a large body of Patriot militia was on its way to relieve the fort, she sent Mohawk runners to alert the British commander of the danger. This information enabled a British, Mohawk, and Seneca force to ambush the Patriots and their Oneida allies in the Battle of Oriskany. After this battle, in which Iroquois warriors fought on both sides, the war in the Mohawk Valley became particularly brutal. The Oneida and Americans retaliated against Brant by pillaging Canajoharie. Brant fled with her children to Onondaga, the Iroquois capital, her departure was so hurried that she had to leave behind most of her belongings.
Molly Brant continued her work of sustaining the Anglo-Iroquois alliance. At Onondaga, the Iroquois held a council to discuss what course to take. Most Iroquois favored assisting the British, but after the Battle of Saratoga, it seemed unlikely that the British could win. Sayenqueraghta, a Seneca chief, urged the Iroquois to withdraw from the war. Brant criticized Sayenqueraghta's advice, invoking the memory of Sir William to convince the council to remain loyal to the Crown. Much of Brant's influence came from her connections to Sir William Johnson and her stepfather Brant Kanagaradunkwa. Additional influence came from the fact that women in matrilineal Iroquois society had more political influence than women in patriarchal societies. Historian Robert Allen writes that "there is no substantive evidence to suggest that Molly was ever a clan matron or mother within the Iroquois matrilineal society". Others contend that, though she was not born to the position, she, in actuality, became one of the Mohawk matrons.
In late 1777, Brant relocated to Fort Niagara at the request of Major John Butler, who considered her influence among the Iroquois to be indispensable. At Niagara, Brant worked as an intermediary between the British and the Iroquois. In 1779, she visited Montreal, where some of her children attended school, but headed back when the Americans began their invasion of Iroquoia that year. She was only able to get as far as the British post at Carleton Island in Canada, where many Iroquois refugees had fled from the Americans, and there she continued her work as an intermediary. Nevertheless, Brant was unhappy living in an army barracks with her children. To accommodate her, the British built her a house on the island in 1781, where she lived with her children and four slaves for the remainder of the war.

Carleton Island was largely abandoned in 1783, and so Brant moved to Cataraqui, now Kingston, Ontario, Canada. Here the British government, in recognition of her service to the Crown, built her a house and gave her an annual pension of £100. They also compensated Brant and her family for their losses in the American Revolution. Hoping to make use of her influence, the United States even offered Brant compensation if she would return with her family to the Mohawk Valley, but she refused.
Molly Brant stayed in Kingston for the remainder of her life, and became a respected member of the community, as well as a charter member of the local Anglican Church. Her son George Johnson, known as "Big George" among natives, married an Iroquois woman and became a farmer and teacher; her daughters married prominent white men. Molly Brant died in Kingston on April 16, 1796, at about age 60. She was buried in St. Paul's Churchyard, Kingston's original burial ground, now the site of St. Paul's Anglican Church. The exact location of her grave is unknown.  Though no portraits of her are known to exist, there is an idealized likeness of her on a statue in Kingston, as well as on a Canadian stamp issued in 1986 (see above photo).
Since 1994, Brant has been honored as a Person of National Historic Significance in Canada. She was long ignored or disparaged by U.S. historians, but towards the end of the 20th century scholarly interest in her life increased. She is commemorated on April 16 in the calendar of the Anglican Church of Canada, and appears also in the Episcopal Church's Holy Women, Holy Men.
Posted by Harry Allagree at 7:00 PM

Hi, did you ever come across any information as to Molly adopting a child named Garrett VanSlyke during the American Revolution. Apparently Garrett was adducted by the Mohawks, taken to Canada and will eventually live with Molly Brandt, until Garrett's Uncle buys his freedom. Thanks, Diane McLellan

Diane, in my research of Molly Brant I found a couple of references to a First nations orphan, "little Willie Lamb," who accompanied Molly & her family when they moved to Fort Niagara in 1777. He is also mentioned as being with Molly later, when she was living in military barracks at Carleton Island, referred to as "William Lamb who may have been an Indian orphan or a black." Very interesting. I've never heard of the child Garrett VanSlyke, and wonder if he is the same Willie Lamb.

Hi, I discovered your profile of Molly Brant because I am studying her for a class I am taking at Mohawk Valley Community College on NYS History. I became interested in her partly because there is an historical marker about her on the edge of the town I live in, Little Falls. Since I already had read that she lived in Canajoharie and out by Fonda and up in Johnstown, this puzzled me. It puzzles me no more! The marker tells how she, to use modern parlance, 'dropped a dime' on General Herkimer and his patriot militia, who were gathering at his house in order to march over to Fort Stanwix. The marker notes that Molly Brant had a "home" here; it affords a view right across the river to Herkimer House. She was spying on him and let St. Leger know when she spotted the activity. I imagine she sent word via a runner or runners. And as a result, Herkimer walked into an ambush. There are more details about all that, but that's the overall picture. At any rate, my research continues... Yes, I did find Barbara Graymont's good work.

My Grandmother told me of the story of how Sir William Auto Johnson was her Grandfather. He acquired 144,000 acres of land that Molly donated what is now Johnstown NY. My LDS family has found many family members , but this is all new to me as I search to learn more.

Thank you for your work.
Lloyd Stolworthy

I might be able to help about little Willie Lamb. I have been conducting family research for years and recently came across the parentage to one of my ancestral grandmothers, Abigail Lamb (wife to Duston Cheney). She and her husband migrated to Fenton, Michigan about 1833. I long since knew that she was the daughter of William Lamb and Martha Thorp of New York. Recently I discovered that William Lamb and his father, William Lamb, were captured in Harperfield, New York in 1780. From a newspaper account about one of his William Jr's other daughters, I learned about this captivity. The newspaper article (an obituary for the daughter) speaks of her father being kept 7 years in the company of Mollie Brant and Sir John Johnson. He was 14 when he returned to his family. contact me at stronado@dnet.net