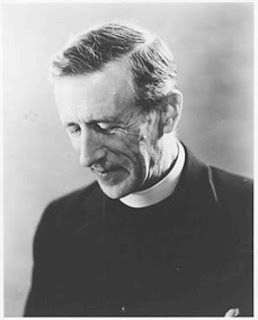 Despite the flack Teilhard took, he continued his research up to the time of his death, wrote privately, was invited to be part of various projects and expeditions, and to travel the world: China, France, the U.S., Belgium, Somalia, India and Kashmir and South Africa, among other places.  It's virtually impossible to list all of the things Teilhard wrote during this 30-year period. There are simply too many of them, in various forms. The best one might do is point out some of his major works, all of which were published in English only after his death, largely because they'd been on the Catholic Church's ancient Index of Prohibited Books, generally referred to as "The Index". Also, much of his work was written and revised over many years. The following is a short list, in the order in which they appeared in English, not the order in which they were originally written: The Phenomenon of Man (1959); The Divine Milieu (1960); Letters From A Traveler (1962); The Future of Man (1964); Hymn of the Universe (1965); The Making of A Mind: Letters From A Soldier-Priest 1914-1919 (1965); Human Energy (1969); Activation of Energy (1970); Man's Place In Nature (1973).

Teilhard's own words at various times during his 30 years of being silenced can shed some light on his firm commitment to truth and to his work, regardless of the cost. Here are just a few:
"...I am at peace, really, with the Church and with God...Always tending towards what is to come, yet admitting that the new thing cannot be born except of fidelity to what is, I know find myself quite beyond revolt."
"I now feel more bound...to the Christ of the Gospel than ever before in my life."
"How can I stop without failing in my most urgent duty to God and man?...I have decided to continue as before, trusting to the legitimacy of my cause. I know that that is what all the heretics said. But...they did not take up their position solely to exalt Christ above all things: and, basically, that is the only charge that can be brought against me."
"What distresses me is not that I am shackled by Christianity, but that Christianity should at the moment be shackled by those who are its official guardians: the same problem that Jesus had to face two thousand years ago."
"It is on this point of loyalty and obedience that I am particularly anxious to assure you that, in spite of apparent evidence to the contrary, I am resolved to remain a 'child of obedience.'"
"Don't picture me as an underground worker or as persecuted. The most you can say is that I am a man trying to express frankly what lies at the heart of our generation."
In 1951 Teilhard de Chardin moved permanently to New York City, residing at the Jesuit Church of St. Ignatius of Loyola, Park Avenue. After making several trips to South Africa, he revisited his beloved France for the last time in the summer of 1954. At 73 he was aging, but he never stopped writing and giving talks. "It is much less ideas", he said, "than a certain spirit I would like to spread."
In March, 1955, at a luncheon at the home of his diplomat cousin, Jean de Lagarde, Teilhard told friends that he would like to die "on the day of the Resurrection". On April 10, 1955, nearly a month later, Easter Sunday, he attended a concert, then joined friends for tea at the apartment of Rhoda de Terra, his personal assistant of six years. It was around 6:00 PM and the group had been engaged in an animated discussion. Teilhard had just laid a paper down on the window sill, when he fell forward to the floor having a cardiac seizure. He regained consciousness briefly, but died moments later, ironically having attained his wish to die on the day of the Lord's Resurrection. Teilhard's body was buried in the cemetery for the New York Province of the Jesuits, at their novitiate, St. Andrew's-on-the-Hudson in Poughkeepsie, NY.
Teilhard once said, "Let truth appear but once to a single soul, and nothing can ever stop it from invading everything and setting everything ablaze." Lesser minds found it hard to keep up with him. Misunderstanding, stubborn opposition to new ideas and to change, and prejudice were frequently thrown in his way. Who would be surprised if he sometimes wondered if he dare to dream his dreams for humankind, or should he blindly obey those who lacked his vision? He walked the tight-rope of choosing to dream, despite the cost, at the same time maintaining his intellectual and spiritual integrity. Teilhard himself said that the most difficult task for us all is not so much solving our problems as knowing what they are. Brilliant as he was, even he didn't have all the answers. Perhaps that's why he could say, "In all my work I am conscious of being no more than a sort of sound-box, amplifying what people around me are thinking. Take from me what suits you and build your own structure."
Posted by Harry Allagree at 9:52 PM

The character or "Fr. Telemond" in the movie "The Shoes of the Fisherman" was modeled loosely on Teilhard.

The character or "Fr. Telemond" in the movie "The Shoes of the Fisherman" was modeled loosely on Teilhard.

Thank you, Fr. Harry, for reminding us of Teilhard de Chardin, whose bright hopes and phenomenal research went unacknowledged by the official Church. Believing there is a bridge or a unity of God and science or a reconciliation of religion and science was a dream deferred,