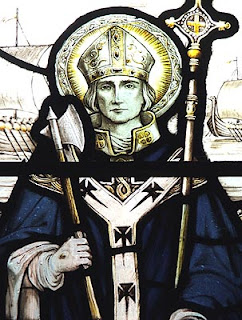 From the 8th century on, Viking raids were carried out, first by Norwegians. In the 9th century the Danes joined in, beginning with a series of attacks on the east coast of England in 835. By the mid-9th century they had gained a firm foothold on Kent and East Anglia. The resistance to the Danes in the beginning was disorganised and, given the ease of conquest, they decided to settle permanently in England. This was the first step in the establishment of the so-called Danelaw which was the area in eastern and north-eastern England of the time which was under Danish rule. The Danes were never to leave England entirely.

Alphege was born into such a troubled time in the mid-10th century. He was a monk at Deerhurst, then abbot at Bath, and finally, through the influence of Archbishop Dunstan, he became the bishop of Winchester.

In 1005 Alphege succeeded Ælfric as Archbishop of Canterbury, and took St. Swithun's head with him as a relic for the new location. He travelled to Rome in 1007 to receive the pallium, symbol of his status as an Archbishop, from Pope John XVIII, but was robbed during his journey. While at Canterbury he promoted the cult of Dunstan. He also introduced new practices into the liturgy. He was present at the council of May, 1008 at which Wulfstan II, Archbishop of York, preached his a sermon, castigating the English for their moral failings and blaming the latter for the tribulations afflicting the country.

In 1011 the Danes again raided England, and from September 8-29 they laid siege to Canterbury. Aided by the treachery of Ælfmaer, whose life Alphege had once saved, the raiders succeeded in sacking the city. Alphege was taken prisoner and held captive for seven months. Canterbury Cathedral was plundered and burned by the Danes following his capture.

The remainder of St. Alphege's story is recounted in the Anglo-Saxon Chronicles:

"A.D. 1011. This year sent the king and his council to the army, and desired peace; promising them both tribute and provisions, on condition that they ceased from plunder. They had now overrun East-Anglia, and Essex, and Middlesex, and Oxfordshire, and Cambridgeshire, and Hertfordshire, and Buckinghamshire, and Bedfordshire, and half of Huntingdonshire, and much of Northamptonshire; and, to the south of the Thames, all Kent, and Sussex, and Hastings, and Surrey, and Berkshire, and Hampshire, and much of Wiltshire. All these disasters befel us through bad counsels; that they would not offer tribute in time, or fight with them; but, when they had done most mischief, then entered they into peace and amity with them. And not the less for all this peace, and amity, and tribute, they went everywhere in troops; plundering, and spoiling, and slaying our miserable people. In this year, between the Nativity of St. Mary and Michaelmas, they beset Canterbury, and entered therein through treachery; for Elfmar delivered the city to them, whose life Archbishop [Alphege] formerly saved. And there they seized Archbishop [Alphege], and Elfward the king's steward, and Abbess Leofruna, and Bishop Godwin; and Abbot Elfmar they suffered to go away. And they took therein all the men, and husbands, and wives; and it was impossible for any man to say how many they were; and in the city they continued afterwards as long as they would. And, when they had surveyed all the city, they then returned to their ships, and led the Archbishop with them. Then was a captive he who before was of England head and Christendom; there might be seen great wretchedness, where oft before great bliss was seen, in the fated city, whence first to us came Christendom, and bliss 'fore God and 'fore the world. And the Archbishop they kept with them until the time when they martyred him.


A.D. 1012. This year came Alderman Edric, and all the oldest counsellors of England, clerk and laity, to London before Easter, which was then on the ides of April; and there they abode, over Easter, until all the tribute was paid, which was 48,000 pounds. Then on the Saturday was the army much stirred against the
bishop; because he would not promise them any fee, and forbade that any man should give anything for him. They were also much drunken; for there was wine brought them from the south. Then took they the bishop, and led him to their hustings, on the eve of the Sunday after Easter, which was the thirteenth before the calends of May; and there they then shamefully killed him. They overwhelmed him with bones and horns of oxen; and one of them smote him with an axe-iron on the head; so that he sunk downwards with the blow; and his holy blood fell on the earth, whilst his sacred soul was sent to the realm of God. The corpse in the morning was carried to London; and the bishops, Ednoth and Elfhun, and the citizens, received him with all honour, and buried him in St. Paul's minster; where God now showeth this holy
martyr's miracles. When the tribute was paid, and the peace oaths were sworn, then dispersed the army as widely as it was before collected. Then submitted to the king five and forty of the ships of the enemy; and promised him, that they would defend this land, and he should feed and clothe them..."
Posted by Harry Allagree at 11:31 AM