Hope When There is No Hope 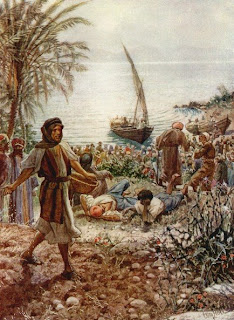 “The great question is whether our hope in God makes it worthwhile to contribute what we have to offer at any given moment, even if we feel quite sure it will not be enough. Hope is a central Christian virtue. The
alternative, much of the time, is passive defeatism. Hope is the expectation that the goodwill we have experienced from God in the past is not
exhausted, that God will continue to work with us even under the most difficult of circumstances. Such a hope makes it possible for us to act,too...” (L. William Countryman, Scripture professor at Church Divinity School of the Pacific)

We acknowledge in the opening prayer this morning [Pentecost 7-Proper 11] that God “know[s] our necessities before we ask and our ignorance in asking...”, and we prayed that God might “mercifully give us”, through the worthiness of Jesus, “those things which for our unworthiness we dare not, and for our blindness we cannot ask...” If our prayer is honest, then you and I can surely identify with and relate to those sheep, of whom Jeremiah speaks in the first reading [Jeremiah 23:1-6]: destroyed and scattered and unattended; with those “called ‘the uncircumcision’”, those aliens and strangers “having no hope and without God” of whom Paul speaks in the Epistle [Ephesians 2:11-22]; and with the crowd coming to Jesus who “were like sheep without a shepherd” [Mark 6:30-34; 53-56]. Perhaps we feel this way at this particular time in our country, when we’re all feeling the pinch of a receding economy, and when so many others, perhaps among our own family or friends -- the poor, the homeless, the disabled, those without health care -- are losing the few meager safety nets upon which they rely. We may feel it particularly at this time in the Episcopal Church as we, over the past two weeks, have witnessed and prayerfully supported our bishops, clergy, and lay deputies, at the General Convention in Anaheim, as they grappled with the huge challenges and realities of change in our society and in the Church.

The question which the Scriptures today pose for you and me is this: aware of and acknowledging all of this, are you and I willing to trust God when called to respond to these needs with hope, peace, justice and righteousness, and the selfless compassion of Jesus?

Mark, whose Gospel we’ve been following for several Sundays, continues to remind us through his stories that the opposite of faith isn’t unbelief, but fear. Over and over in these stories Jesus counsels us to not be afraid, to take the risk of hope, and to do that primarily by reaching out beyond ourselves to minister to others. “...you are citizens with the saints and also members of the household of God, built upon the foundation of the apostles and prophets, with Christ Jesus himself as the cornerstone. In him the whole structure is joined together and grows into...a dwelling place for God.”

What better teaching example for this could we have than Mark’s Gospel reading for today? Jesus had sent his disciples out by two’s to missionize the surrounding villages. They had done so, and Mark notes that it’d been rather successful. The apostles return and gather about Jesus, excitedly sharing “all that they had done and taught.” Jesus, always one to keep priorities straight, listened attentively, then said “Come away [now] to a deserted place all by yourselves and rest a while.” You and I can’t minister to others effectively unless we take time off: to rest, to pray, to keep things in proper perspective. Mark adds, as if to justify Jesus’ proposal, “...For many were coming and going, and they had no leisure even to eat...”

So off they go, in a boat, to a deserted place. Or so they think.
As so many of us have experienced, I suspect, especially parish clergy, just when you’re about to have some alone time, someone recognizes you, sees where you’re going and beats you there ahead of time, always with some need in hand. Jesus and the apostles are no exception. Jesus comes ashore, Mark tells us, to find not only a crowd , but a “great crowd”, waiting: “like sheep without a shepherd”. And Jesus “had compassion for them,... and began to teach them many things.” [The RCL reading stops here, but Mark goes on to tell the story of the feeding of the 5000, responsibility for which Jesus handed off to -- guess who?? -- his disciples. Mutual ministry is Jesus’ customary way of doing things!]

Notice several things: Jesus and the apostles had plans -- to kick back and rest. But those plans were interrupted, both here on the shore and later in Gennesaret, by a crowd of needy, ailing, spiritually and physically hungry, men, women and, undoubtedly, children. In every instance, Jesus set aside his own preferences in favor of others‘ immediate needs: “...he had compassion for them...” He and the apostles didn’t even have at hand all the things they needed to address these needs. “All we have are five loaves of bread and two fish.” Yet Jesus wasn’t about to leave these folks hopeless or despairing.

In the first reading, Jeremiah speaks of the hope God gives the people in God’s promise of “a righteous Branch” of David who will reign as king and deal wisely, and administer justice and righteousness. Scripture scholar Matthew Skinner says: “...to talk about the righteousness of God is to indicate God’s commitments to deliver and preserve God’s people. Righteousness summarizes all of God’s salvific activity...the Lord’s unswerving commitment to ensure the welfare of God’s people.” That is always Jesus’ priority agenda, and ours as his followers: to take care of those who need it -- even if it disrupts our plans, even if the timing isn’t the best, even if, at first, we can’t imagine how we’ll go about filling all those needs.

I’ve been trying to live through this very thing on a very personal level since two weeks ago Tuesday. In mid-December this past year, my son, Andrew, had a recurrence of brainstem encephalitis, with which he’d been afflicted nine years ago and from which he’d undergone an almost two year recovery process. He was hospitalized from mid-December to the end of February in Florida, where he almost died a couple times, and again for two weeks at UCSF Hospital where, through the goodness and assistance of friends, we had transferred him. After being released in March, he was essentially confined to a wheelchair, had serious breathing problems, some memory deficit, periodic seizures, etc. Because of the illness he had to give up his apartment and many of his possessions in Florida, his car was repossessed, and through all this he has not had any health care insurance. No insurance company will touch him because of his previous illness, when he was fully insured, but incurred over a half-million dollars worth of bills. From March to May he was relatively stable, but then suffered a relapse and was hospitalized all of June, then released for four days, then back in for four days.

Two weeks ago Tuesday, I happened to visit him at the hospital in Sacramento, aware that he could be discharged soon, presumably to a skilled nursing facility temporarily. While I was there a discharge team of a social worker, physician and therapist unexpectedly marched in and asked Andrew what his “discharge plan” was. Having tried, without success, for days to get someone to come and discuss this with him, he had to acknowledge that he had no plan. The alternatives, then, it was explained, were 1) family, which wasn’t feasible in the long term; 2) a half-way house at $500-1000/week; or 3) an “intermediate care center sponsored by the Salvation Army”. When I asked what the latter was, the response was: “a shelter where he’ll have a cot and a pillow”. I don’t often get really angry, but I confess to God and to you that I was really angry! I helped Andrew pack and brought him straight to my home in Cotati.

Was it scary to make that decision? Yes. Was I afraid of the outcome? Most definitely. Was it inconvenient? Yes. Did I have any inkling how I was going to manage it? No, and I still don’t except from day to day. But one phrase kept rolling around in my mind and heart: from the Epistle for Sunday, Pentecost 5, just two days before this, a passage from 2 Corinthians 12: “My grace is sufficient for you, for power is made perfect in weakness.” And that has carried me through this week, and, I’m convinced, will carry us into the unknown future weeks. And we have made it so far. And Andrew has shown consistent signs of improvement. And we learned yesterday that he has been approved for SSI, and possibly SSDI, which would help immensely. And we continue on by God’s grace and compassion and righteousness and hope. When God calls you and me to care for the other, even if it isn’t timely, or disrupts our convenience, or challenges our ingenuity and resourcefulness, God’s presence and grace is sufficient for us, for God’s power is made perfect in our weakness.

I leave you with a few other words from Fr. Countryman, whom I quoted at the beginning: “ ...We do not have to resolve all the problems or produce the perfect solution. What is important is to offer what we have in the hope that God will make use of it to do more than we ourselves could imagine. Christians should not be living as if there were no hope in this world. We should find ourselves at the rash edge of expectation, if necessary, rather than submerged in despair.

Perhaps it is still possible to retrieve the vision of 'one new humanity' in [the reading from] Ephesians—at least for a little while here in the place and time that we inhabit. Perhaps it is still possible to build highways for returning exiles, to renew human communities riven by conflict, to step beyond ancient ways of defining one another—but not unless we try, in whatever fumbling and inadequate yet hopeful way we can offer.”

Posted by Harry Allagree at 1:15 PM