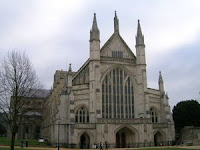 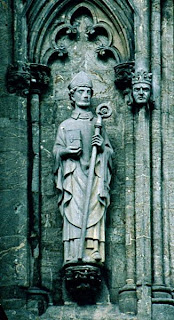 Winchester Cathedral
St. Swithun, 800-862
(Photo: Nina Aldin Thune)
Prior to coming into the Episcopal Church I don't believe I'd ever heard of St. Swithun. It sounds like a contrived name, and I probably heard it as it's often used: to describe a theoretical typical parish somewhere, as in "St. Swithun's in the Swamp". I find myself wondering if Swithun, a real person, disliked his first name as much as I do mine.
Swithun of Winchester, however, was very real and lived a full (for those days), interesting life mostly in or about the city of Winchester. He studied at the monastic school at Old Minster, Winchester, and went on in early youth to take vows, received the tonsure and eventually was ordained a priest. He also became Provost of the Old Minster school.
He served as chaplain and chancellor to King Egbert of Wessex. Egbert, whose unification of the kingdom was similar to that attributed to the legendary King Arthur, was the monarch to whom we owe the name "England" and the name of its citizens, "Englishmen". He could really be thought of as the first true king of England. When Egbert died in 839, he was succeeded by his son, Ethelwulf, who'd been a student of Swithun. Ethelwulf had been ordained subdeacon, not expecting to succeed to the throne, but when he did become king, he was dispensed from Orders and married. Lucky for England and the rest of the world, for his son was Alfred the Great. In 852 Ethelwulf chose Swithun as bishop of Winchester, and Swithun was consecrated by Archbishop Ceolnoth of Canterbury.
Sadly, we don't know a whole lot about Swithun, since details of his life weren't recorded. We do know that as bishop he built and repaired many churches. He always travelled on foot with his clerks and always at night, in order to avoid public notice. Swithun presided at the major Synod of Mycel which decreed that the king would give a tithe of all his land holdings in England to the Church, exempt from all taxes, in return for the Church’s agreement to pray for the king’s soul every Wednesday. The synod also extended to the whole kingdom, the Peter’s Pence collection, which helped finance the papacy.
Where there's a saint, there's usually a legend! Swithun apparently built a fine stone bridge over the river in Winchester. A poor woman, who was crossing the bridge with her apron full of eggs, was put upon by a thug who smashed all of her eggs. Bishop Swithun, who just happened to be passing by, saw what had happened and stopped to bless the woman’s eggs which, mirabile dictu, all became whole again.
Swithun died on July 2, 862. He had asked to be buried in the ordinary cathedral cemetery, rather than in an ornate tomb in the cathedral. He preferred a place “where my grave might be trodden on by those who passed by and the rain might fall upon it”. (Since the Danes had by then devastated the cathedral, Swithun may have had little choice!) Nevertheless, he got his wish and was buried in an ordinary grave, covered with a grave stone, just outside door of the old cathedral. In ensuing years his relics, including his head shrine, were translated and retranslated three or four times. For being such a little-known saint, St. Swithun has some 28 ancient churches dedicated in his honor throughout England.
Since there was a huge downpour on the day his remains were first relocated, it was said that rain was a sign of St. Swithun’s objection to the translation. The tradition, memorialized in a verse, quickly grew that if it rained on St. Swithun’s day, it would rain for forty more days:
Saint Swithun’s Day if ye do rain,
For forty days it will remain.
Saint Swithun’s day, an ye be faire,
For forty days ‘twill rain nae maire.
Out here in California, we were wishing that it'd been pouring this St. Swithun's morning, because we, in our third year of drought, could sure use at least 40 days of rain! But no luck. It was beautiful, sunny, and cool this morning, so for at least a month or so down the line "'twill rain nae maire"!
Posted by Harry Allagree at 3:58 PM