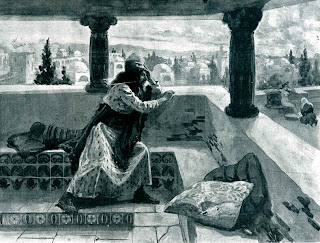 “Comfortable congregations prefer to hear tame sermons about mustard seeds and lilies of the valleys rather than be disturbed by the genuinely human behavior of David and his court.” (Rolf Jacobson. “Preaching the David Story”, Word & World)

The opening words of the reading from 2 Samuel today reminded me of a saying I once heard that “In the spring of the year a young man’s heart turns to love, or to what the young lady’s been thinking about all year round.” Actually, “in the spring of the year” isn’t what the Hebrew text says. The meaning is “at the turning of the year”, when kings went to battle. That David is taking his afternoon nap, while his generals are out on the battle-line is, in itself, a telling fact in the story. Sauntering about on his roof, David, now in his young manhood, must’ve cast a virile figure because even as a young sheepherder the Scripture writer in 1 Samuel 16 couldn’t help but noting: “Now he was ruddy, and had beautiful eyes, and was handsome.” Makes you wonder if the writer wasn’t a woman! At any rate, David can’t help but notice below in the courtyard of an adjacent villa the beautiful and probably naked body of a woman, who is bathing there, in fact, ritually purifying herself, the Scripture says, after her period. David dispatches an underling to get a profile on the woman who turns out to be Bathsheba, wife of one of his top 37 warriors, Uriah the Hittite, and granddaughter of his royal counselor, Ahithopel. David wastes no time: the Scripture notes that “he sent messengers to get her, and she came to him, and he lay with her.” A very human situation. Husband is off at war. Woman is lonely. A studly king summons her, simply because he can. She doesn’t or can’t resist. And the rest is history.

Time passes, and Bathsheba sends the “oh-oh” message to David that she’s pregnant. No question who the father is.

As political figures in our recent experience, caught up in sexual scandals, have done, thinking they’re invincible, so too David plays “the fool”, in the words of Psalm 14, for that is really what sin is: the folly of selfishness. He figures he can spin the truth of the situation so as to veil his culpability. In a very unusual gesture he summons Bathsheba’s husband, Uriah, direct from the battlefield on the pretext of seeing how Commander Joab and the army were faring. Uriah, undoubtedly, thought he was being tested for some reason. David suggests that Uriah kick back, go down home, and “wash your feet”: a familiar Jewish euphemism for having sexual intercourse with his wife. Uriah, military man that he was, resists even the king’s suggestion and sleeps on David’s doorstep with all the servants, because disciplined soldiers abstained from that sort of thing while on duty. David is informed the next day and questions Uriah who protests his loyalty to the king and to God: “The ark and Israel and Judah remain in booths; and my lord Joab and the [other soldiers] are camping in the open field...As you live, and as your soul lives, I will not do such a thing.” So, David moves to Plan B and invites Uriah to dinner the next evening and gets him drunk so that surely now he’ll go down and sleep with his wife. But no luck: Uriah again beds down on the porch with the servants.

David is now desperate, and taking his foolishness to the next extreme -- which is really what sin is -- he writes an order for Joab, having the gall to send it by Uriah’s own hand, since he certainly trusted Uriah’s complete loyalty by now, instructing Joab to put Uriah on the frontline in the thick of combat, and then to draw back so that Uriah will most certainly be killed. “The fool says in his heart, ‘There is no God’...all are corrupt and commit abominable acts...every one has proved faithless...[they] eat up my people like bread and do not call upon the Lord...” David has, in a sense, eaten up Bathsheba, then Uriah, “like bread”. David isn’t filled with the bread, that is, the wisdom of God, but with his own self-seeking power. Today’s reading ends here, but there’s much more to the story.

“16As Joab was besieging the city, he assigned Uriah to the place where he knew there were valiant warriors. 17The men of the city came out and fought with Joab; and some of the servants of David among the people fell. Uriah the Hittite was killed as well. 18Then Joab sent and told David all the news about the fighting; 19and he instructed the messenger, ‘When you have finished telling the king all the news about the fighting, 20then, if the king’s anger rises, and if he says to you, “Why did you go so near the city to fight? Did you not know that they would shoot from the wall? 21Who killed Abimelech son of Jerubbaal?* Did not a woman throw an upper millstone on him from the wall, so that he died at Thebez? Why did you go so near the wall?” then you shall say, “Your servant Uriah the Hittite is dead too.” ’

22 So the messenger went, and came and told David all that Joab had sent him to tell...25David said to the messenger, ‘Thus you shall say to Joab, “Do not let this matter trouble you, for the sword devours now one and now another; press your attack on the city, and overthrow it.” And encourage him.’

26 When the wife of Uriah heard that her husband was dead, she made lamentation for him. 27When the mourning was over, David sent and brought her to his house, and she became his wife, and bore him a son.

“But the thing that David had done displeased the Lord, 12 1and the Lord sent Nathan to David...”

Nathan the prophet will confront David in no uncertain terms, though David at first tries to bamboozle Nathan with his coverup. Nathan puts David’s sin right up in his ruddy face and in front of his beautiful eyes. And there will be consequences, even though David has a “come-to-Jesus” moment and admits and laments his sin. Nevertheless, as Nathan asks: “Why have you despised the word of the Lord?...Now therefore the sword shall never depart from your house...Thus says the Lord, ‘I will raise up trouble against you from within your own house...’” The son of David and Bathsheba later becomes very ill and dies. David is bereft. Bathsheba conceives again and bears Solomon, who is destined to be a great, mostly faithful king. Another son, Amnon, commits incest with his sister, David’s daughter, Tamar who ends up, “a desolate woman”, according to Scripture, living with their brother, Absalom. Absalom bides his time for two years, then does Amnon in in an ambush, then goes on the run for several years. David at length forgives him, but the ingrate Absalom, playing the fool very much like his father, usurps the throne, driving David out of Jerusalem. Upon the advice of Ahithopel, grandfather of Bathsheba and royal counselor mentioned above, and who has now turned on David, Absalom, in an ultimate “dis” of his father, David, goes “in to his father’s concubines in the sight of all Israel”.

David then goes on the run from all of Absalom’s supporters, whom he manages to elude. Ahithopel, having been outsmarted, goes home, sets his affairs in order, and ingloriously hangs himself. David sends three army groups to pursue Absalom, who’s again on the run, but with very public and specific orders not to harm Absalom when they arrest him. Absalom, in his hasty retreat, gets his coif caught in the branches of an oak tree and is, so to speak, left hanging! Joab. David’s commander, in a wanton violation of David’s order, not only hurries to do Absalom in, but thrusts three spears into Absalom’s heart, while ten of Joab’s young warriors surround Absalom and deliver the coup de grace. And so the utter foolishness of sin and the display of misguided human power multiplies, and David’s misery along with it, proving once again that “God is in the company of the righteous...[the wicked’s] aim is to confound the plans of the afflicted, but the Lord is their refuge...”

What a stark contrast all this is to the example of Jesus in the 6th chapter of John’s Gospel. The point of this section of John’s Gospel is to counsel hearers and readers to abide in the word. At the Last Supper Jesus had taught the disciples: “If you remain/abide in my word...you will know the truth and the truth will make you free.” John is saying that this is what’s possible for us. In fact, he structures his Gospel so that rereading it over and over is important in order to get the point.

In today’s Gospel selection John recounts two major events, both so important to the early Christian community that they’re repeated in all four Gospel accounts: the story of the feeding of the 5000 and the incident of Jesus walking on the water. In the first the feeding takes place in the context of Passover; in fact, John refers to it three times. John’s version of the story has Jesus himself distributing the bread and fish to the people. In verse 35, Jesus will state very clearly: “I am the bread of life.” Jesus’ words and actions are inseparable, for he himself is the nourishing and sustaining Word which is the bread of life for all.

In the incident which follows this feeding sign, John differs from Mark’s story of the boat in the storm which we had several Sundays ago. Here Jesus isn’t in the boat with the disciples, and though the sea is rough and a wind is blowing, there’s not the desperation of Mark’s version. Here Jesus is “revealed” by appearing, walking on the water towards them. They’re “terrified” of that, true, but all Jesus has to say is “Here I am; don’t be afraid.” For John “I am” verbalizes the very name of God. It describes who Jesus is: the power of God acting, to bless and multiply bread and fish, the power of God acting, to accompany and comfort people safely through life’s storms, and to allay their fears.

St. Paul well knew the foolishness and consequences of relying on one’s own selfish power, as exemplified in the story of David and his family. In Paul’s letters to the Corinthian Christians, he eloquently teaches them and us who is really the Lord of all life. Paul says: “...We have renounced the shameful things that one hides; we refuse to practice cunning or to falsify God’s word...we do not proclaim ourselves; we proclaim Jesus Christ as Lord...But we have this treasure in clay jars, so that it may be made clear that this extraordinary power belongs to God and does not come from us...”