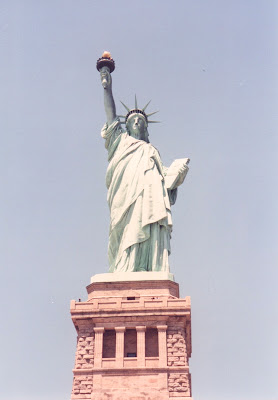 Not like the brazen giant of Greek fame,
With conquering limbs astride from land to land;
Here at our sea-washed, sunset gates shall stand
A mighty woman with a torch, whose flame
Is the imprisoned lightning, and her name
Mother of Exiles. From her beacon-hand
Glows world-wide welcome; her mild eyes command
The air-bridged harbor that twin cities frame.
"Keep ancient lands, your storied pomp!" cries she
With silent lips. "Give me your tired, your poor,
Your huddled masses yearning to breathe free,
The wretched refuse of your teeming shore.
Send these, the homeless, tempest-tost to me,
I lift my lamp beside the golden door!"
- Emma Lazarus
I first stood in the presence of the Statue of Liberty in 1994 with my son, Andrew. He was with the Joffrey Apprentice Company then and I was visiting him in New York. It was a very moving and proud moment for me as an American citizen to stand before this symbol of an open-armed country -- my country. At 57 years of age then, I was well aware that our nation, for all its greatness, also had many "warts" and issues. I'd lived through some of the significant ones: World War II, the Korean War, the Civil Rights struggles, the Vietnam War, the radical changes from the strait-laced '50's, to the '60's of drugs and free love, to the '70's and '80's with advances in space technology, prosperity beyond people's imagining, but also a huge decline in ordinary civility and respect and love of true wisdom and the emphasis on "me", "I want", and "now".
These fifteen years later I find myself one of those "senior citizens" with whom I didn't associate much in those earlier years. I live in an era which has seen great strides in racial relations, to the point of having an African-American man as President. I'm up to my own in ears in some of the new communications technology which has mushroomed and grows exponentially in shorter and shorter periods of time. I've also lived long enough to have developed great concern and fear, not just for my country, but for all the countries and, indeed, the whole earth as we've known it, and for the generations which will follow us. The dangers signs are obvious to all but the willfully ignorant; the alarms are sounding and are increasingly deafening. My great country itself, "land of the free and home of the brave", with its "amber waves of grain" and "purple mountain majesty above the fruited plains" faces one of the, if not the, most threatening economic crashes in its history. Job loss, foreclosure on what we used to call a "man's castle" -- homes, the dumbing down of our children's education, victimization by an absolutely inadequate, unfair, and cruel healthcare system, a distaste for welcoming the very immigrants of whom Emma Lazarus spoke, the locking out of full equality of gay/lesbian/bisexual/transgender sisters and brothers, a political system which has everything else, especially money and power, as a priority rather than the polis, the people who make up this nation -- all these are fairly standard realities at this moment in the United States of America.
If one pays attention enough, however, even in the midst of these consuming and colossal challenges, one can discern what I'd call an inner infrastructure of greatness which has also been an enduring hallmark of American citizens. It breaks forth and pops out here and there in amazing fits and starts. Many American people -- and we all know them and encounter them from time to time -- have the knack and talent of rising to the occasion and holding up for us all to see common human values of courage, honesty, decency, humility, spirituality and love. Watching the fireworks tonight and celebrating joyfully with family and friends is great and I wouldn't knock it in the least. But these other things are the ones we need to equally celebrate, publicize, emulate however we can, if we really appreciate our country. None of us knows for sure how this experiment in democracy which began some 233 years ago will turn out in the end. But you and I can intentionally decide to hope for its success: to work for it, encourage others, sacrifice for it, and pray for it. The Collect for today in the Book of Common Prayer asks "that we and all the people of this land may have grace to maintain our liberties in righteousness and peace..."
If I were honored once again to stand before Lady Liberty, that's about how I'd pray. And I might even be tempted to take the trip inside up into her crown, newly opened to visitors today after years of being closed!
Posted by Harry Allagree at 7:12 PM