A Much Misidentified Woman 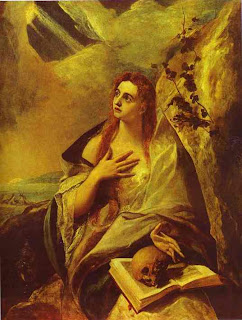 This painting by the great El Greco represents an appropriately subtle traditional depiction of Mary Magdalene, a saint whom we know from Scripture, yet about whom we factually know little.
Fr. John Julian, in his Stars in a Dark World, puts the question of Mary Magdalene into proper perspective: "If one were to see any Renaissance painting of an attractive female saint, with long, loose hair, carrying a small canister or jar, there could be no doubt at all that the person represented was intended to be Saint Mary Magdalene. The person actually shown is the unnamed penitent woman who came to Jesus while he was lying at supper in the house of Simon the Pharisee (Luke 7:36-50) [or Simon the leper (Mark 14:3-9)] and washed his feet with her tears and anointed them with ointment from a jar, and to whom he said 'Your sins are forgiven.' In the very earliest traditions, this woman (who is never named) was identified with Mary Magdalen—very likely because two verses after this story in Luke’s Gospel, Mary Magdalen is mentioned as one of 'a number of women who had been set free from evil spirits and infirmities'. The 'immorality' of the penitent woman is almost universally understood to be sexual in nature, that is, that she had been a prostitute. [Ed. note: I have read elsewhere that the word used means 'outlaw', someone who doesn't conform to all the rules. That would have had tremendous repercussions, given that she was a woman!]
For many centuries in the Western traditions, Mary of Bethany (the sister of Martha and Lazarus) and Mary Magdalene and the Penitent Woman and the Woman taken in adultery have all been identified as one and the same person. However, in the Eastern Church they have always been differentiated and have had separate feast days, and contemporary scholarship has finally put the lie to that over-simplified identification—although it remains remotely possible that Magdalene and the Penitent woman could have been the same person. (The identification of these various women as the same one was so strong that in the 16th century, Jacques Lefèvre d’Etaples suggested that Mary Magdalen was a different person from Mary of Bethany and the Penitent Woman and was excommunicated for his effrontery!)"
Indeed, according to Harvard theologian Karen King, Mary Magdalene was a prominent disciple and leader of one wing of the early Christian movement that promoted women's leadership. Pope Gregory the Great made a speech in 591 A.D. where he seemed to combine the actions of the three women mentioned in the New Testament, and also identified an unnamed woman as Mary Magdalene. He stated that she was a prostitute. This erroneous view was not corrected until 1969 when the Vatican issued a quiet retraction.
What is very clear from the Gospels is that Mary Magdalen was a central figure in the life of Jesus—far more central than the Church has been willing to accept in past years. Luke tells us that she was among the women who followed Jesus and “provided for [him] out of their own resources”. The original Greek is more direct: it says these women 'supported him out of their own possessions.' These women apparently literally paid Jesus’s way and provided
financial backing for him during his public ministry!" (Fr. John Julian)
Mary's name of "Apostle to the Apostles" comes from her ascription as the first witness to the empty tomb who then shared the good news with Jesus' other close disciples. In the earliest extant Biblical accounts now available, Mary of Magdala is described as a Galilean disciple, a witness to both the crucifixion and the mystery of Jesus of Nazareth's resurrected body. Luke 8:2-3 adds to Mary's persona by alluding to her having had seven demons cast out of her, which some have taken to signify a perfected status within the movement. Together with other female followers, Mary accompanied Jesus on his journey to Jerusalem, and witnessed the Crucifixion. Mary remained at the cross until the body was taken down and laid in a tomb. In the early dawn, when the Sabbath was over, Mary Magdalene (with other women) came to the sepulchre with spices to anoint the body. They found the sepulchre empty and were informed of Jesus' resurrection.
According to the Gospel of John, she was the first witness of the Resurrection appearances of Jesus. At first she did not recognize him. When he said her name, she recognised him and cried, "Rabboni." She wanted to embrace him, but he forbade her: "Do not cling to me, for I have not yet ascended to my Father; but go to my brethren and say to them, 'I am ascending to my Father and your Father, and to my God and your God'". This is the last mention in the canonical Gospels of Mary Magdalene, who now returned to Jerusalem. She is probably included in the group of women who joined the Apostles in the Upper Room in Jerusalem after Jesus' ascension.
She is considered by the Roman Catholic, Eastern Orthodox, and Anglican/Episcopal churches to be Saint Mary Magdalene, with a feast day of July 22. She is also commemorated by the Lutheran Church with a festival on the same day. The Orthodox Church commemorates her on the Sunday of the Myrrhbearers which is the second Sunday after Pascha (Easter).
Posted by Harry Allagree at 9:24 AM