A Kind of Church Leader We Could Use Today 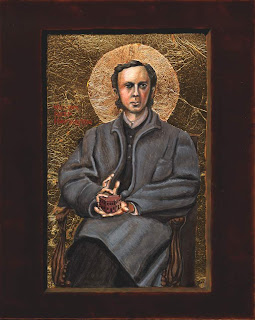 Blessed William Reed Huntington (1838-1909): Episcopal priest, husband, father, practical theologian, writer, secretary of the 1892 Book of Common Prayer revision, nominee for bishop in 8 dioceses (all of which he declined), liturgical designer, and ecumenicist (having developed the four principles of the Chicago-Lambeth Quadrilateral, one of the Episcopal Church's most important historical documents), once quipped: "...If you map out four distinct parties [in the Church], and name them ritualistic, high, low, and broad, I am a good deal in doubt where I properly belong..."

Nevertheless, he was an eloquent proponent of oneness within the Episcopal Church, as well as of oneness among the various Christian denominations.

Among his memorable statements:  "Antagonisms there must always be in the Church, but organized antagonisms ought as far as possible...to be avoided." A profoundly wise bit of advice which it would be well for all involved in the recent and current disagreements within the Anglican Communion to take to heart.

His statement, from his book The Church Idea (1870), is still terribly relevant to the life of the Episcopal Church generally, and to that of each of its parishes and missions: "...If our whole ambition as Anglicans in America be to continue a small, but eminently respectable body of Christians, and to offer a refuge to people of refinement and sensibility, who are shocked by the irreverences they are apt to encounter elsewhere; in a word, if we care to be only a countercheck and not a force in society; then let us say as much in plain terms, and frankly renounce any and all claim to Catholicity. We have only, in such a case, to wrap the robe of our dignity about us, and walk quietly along in seclusion no one will take much trouble to disturb. Thus may we be a Church in name, and a sect in deed. But if we aim at something nobler than this, if we would have our Communion become national in very truth—in other words, if we would bring the Church of Christ into the closest possible sympathy with the throbbing, sorrowing, sinning, repenting, aspiring heart of this great people—then let us press our reasonable claims to be the reconciler of a divided household, not in a spirit of arrogance (which ill befits those who best possessions have come to them by inheritance), but with affectionate earnestness and an intelligent zeal."

"Fervent love" for the Church and its mission in the world, and "unflagging faith" in God's promises are two of Huntington's qualities mentioned in the collect for his feast day today: worthy ideals for us who, in Baptism, bear the name of Christ.
Posted by Harry Allagree at 11:27 AM