The Reign of God Has Come Near 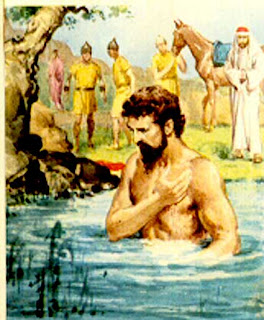 The first reading for Pentecost 6 from 2 Kings 5:1-14 is the wonderful story about Naaman. Naaman was the commander of the army of the king of Aram/Syria/Damascus. He had every reason to feel fulfilled: he's described as a "great man...in high favor with his master", and his success was given to him "by...the Lord" who had enabled his victory for Aram. But he had this problem...a serious skin disease, bad enough that it needed immediate attention. One can imagine the embarrassment it must have caused him, a military man, a man out and about amidst high society people.

The key to this story, for me, is the intervention, not of the high and mighty, of doctors or medical wizards, but of a couple of servants. Naaman's wife had acquired a young female slave, an Israelite, part of the booty of one of Aram's raids, presumably led by Naaman. The young girl, probably hearing Naaman's wife lamenting his condition, could have kept quiet and let them figure out their own solution. But she chooses to volunteer information about a great "prophet who is in Samaria", namely, Elisha. The information is passed on to Naaman who requests a leave of absence from the king to take care of his problem. The king grants it and hurriedly writes a letter to the king of Israel, saying "...know that I have sent to you my servant Naaman, that you may cure him of his leprosy." The touchy Israelite king interprets the message literally, without reading between the lines, and takes it as the Syrian king's ruse to pick a quarrel with him and go to war.

Elisha gets wind of the dilemma, sends a messenger to the Israelite king, questioning his behavior, and tells him to send Naaman to him immediately "that he may learn that there is a prophet in Israel". A prophet is one who stands in God's stead to get across a message, usually of salvation. Naaman arrives at Elisha's house in customary style with his chariots, horses, and entourage. But Elisha doesn't even come outside. He sends a messenger to tell Naaman to go wash in the Jordan seven times, "and your flesh shall be restored and you shall be clean".

Naaman is not at all a happy camper! As if it's not enough indignity to have this affliction, in the first place; as if it wasn't completely embarrassing to have to go to his king and ask for time off; as if it it wasn't enough to suffer the inconvenience of a trip to Elisha's...now this prophet won't even give him, a "four-star" commander, the time of day!  Naaman was looking for results befitting his status: Elisha coming out to greet him, then dramatically and with a flourish, calling on the Hebrew God to cure Naaman, maybe waving his hands over him, for show, and...vaboom! The skin disease is gone! Now, this yokel wants to send him, Naaman, off to a river for ritual cleansing! Naaman is very angry, sputtering to those around him that he'd have done better to wash in one of the rivers of Damascus, which were much cleaner than these Israelite waters. So he's stomping around in a rage!


At this point, once again, the voice of reason comes from a slave, actually several of his servants. They come to him and, obviously quite familiar with his king-size ego, remind him that, had Elisha asked him to do something really hard, Naaman would've done it. He was apparently the kind of guy who thrived on challenge, on figuring out how to get a job done. They help Naaman recall what Elisha really said, not what Naaman thought Elisha had said: "...all he said to you was, 'Wash, and be clean'..." Naaman probably paused and pondered this for a moment. He obviously really listened to his servants, because whether he was really convinced or not, he goes down into the Jordan's waters and "immersed himself seven times...and he was clean".


The message is clear: it isn't Elisha, or even the waters per se, which cure Naaman. It's no human person or thing at all, but rather the living God who acts graciously even in the face of begrudging faith! The sub-message for me is that this healing came about by God working through a couple of humble slaves, obviously people who themselves were very attuned to God.

Luke's Gospel reading (10:1-11; 16-20) bears a similar message. Jesus sends his eager new recruits out "on mission" to preach the Good News, giving them a few guidelines on how to go about it successfully. The most important advice he gives is that they're to be, in essence, like servants or slaves: no purse, no bag, not even sandals; greeting no one on the road, but going directly to the people who need them, offering peace if folks are amenable, staying "put" where they're sent, focused, humbly accepting others' hospitality. Being at the mercy of those whom they serve. And most importantly, letting those folks know that the reign of God, Gods own Presence and Self is already here, "near to you", in you. And God is the one who will do the healing, not them.

The disciples come back, chattering and beside themselves with the "results": demons submitting "to us", Satan falling from heaven, lightning flashes! Fanfare, drama! Then Jesus reminds them, and us, that, yes, by God's power and grace we, simple human beings, function truly as conduits for God's healing, and we're secure in that as long as we remember that it's God who's responsible for whatever happens, not us! Don't rejoice, Jesus says, that the spirits submit to you...rejoice that the living God has created you to be in a permanent, mutual relationship of love. Fr. Gregory Fruehwirth, OJN, in his book Words For Silence writes:

"This One who is beyond and with
speaks the simplest truth: I am.
I am bliss
and I rejoice in you.
And you are because I want you to be.
Come and enjoy my love."
Posted by Harry Allagree at 9:43 PM