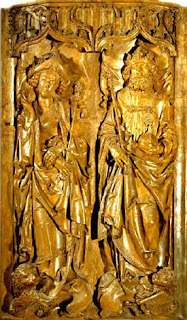 
Well into today I realized that it was one of my namesdays! "Harry" has always been a hard name for me to fit to a saint. My name is not a nickname for "Harold"; it's my actual name, after my grandfather. I've never particularly liked it, and probably would have preferred my middle name, "Richard", to it. I've always been told that, saint-wise, "Harry" is a derivative of "Henry" and that's the way my ordination certificate reads (in Latin, of course): "Henricus". In 1986 I learned that there's a Greek saint, "Charalampos" = joyful light, the Greek equivalent of "Harry". One of my Greek friends brought back his icon for me.  St. Charalampos lived c. 89-202, 113 years!  He was possibly the Bishop of Magnesia, in the region of Thessaly, under the persecution of Lucian. He suffered greatly as a martyr, his torturers lacerating him with hooks and scraping the skin from his body. How he was able to say anything after this, I don't know, but it's alleged that he responded: "Thank you, my brothers, for scraping off the old body and renewing my soul for new and eternal life." Long name, but I like the guy!

But back to St. Henry. I ran across the following rather nice, and apparently authoritative, commentary on our saint, written by Plinio Corréa Oliveira (1908-1995), professor at the Univerity of São Paulo, a Brazilian intellectual, politician and Catholic activist:

"...the life of St. Henry is full of memorable acts that should be reported...it is necessary to place them in their historical context.


We are in the Middle Age, in the early 1000s...The Middle Age began with the fall of the Roman Empire in the West. It was invaded by incalculable hordes of barbarians. Those barbarians established themselves inside the imperial territory and ended by subjecting the Romans to their control.


Gradually the Roman population also fell into barbarianism. The roads were abandoned with no one to care for them; the aqueducts that supplied the cities with water broke and no one repaired them; the palaces occupied by barbarians became dirty and disorganized; works of art in public places were ruined, and the cities fell into chaos. Everything that represented culture and civilization was miserably destroyed. In this situation Europe became illiterate and its level of customs sunk to unimaginably low levels...

While everything was being crushed, the Catholic Church remained as the one existing institution. Those barbarians began to convert under her influence...


In the year 1000, civilization had already achieved much in relation to the original barbarian way of living, but Catholic civilization was still far below the standards it would reach 200 or 300 years later. That is to say, at the time of St. Henry II, we are in a semi-barbarian situation.


Some peoples were more civilized than others. In Europe there were islands of an incipient Catholic civilization amid a sea of barbarian peoples who continued to go and come at will and attack the established kingdoms...


One of the earliest conversions took place with the Germanic peoples who occupied the territory of present-day Germany, Austria, Slovakia, the Czech Republic and Switzerland. Those peoples became civilized and constituted a political entity called the Holy Roman German Empire. It was called Empire because it encompassed different peoples as a federation. Those free peoples agreed to be led,  not governed, by a single political chief, elected by the various heads of State. So, as a league including a large territory and different peoples, it was called an Empire. It was called Roman because its model was the old Roman Empire; it was called German because it had been founded by German peoples; and it was called Holy because its principal finality was to defend the Catholic Church against the aggression of the pagans.


In the person of St. Henry II, we see an Emperor who was also a saint. That a great political leader and head of an army was a saint does not fit very well with the lives of the saints taught by a certain sentimental piety. Indeed, he held the highest office in the most important political organization of his time and was, therefore, the most powerful man in Europe. Simultaneously he was the greatest warrior of Europe and the first son of the Church. He was par excellence the son of the Church. He was the one who always protected the Church against the attacks of her enemies.


He also had to face the peoples of the East who continuously attacked the Empire. So he gathered together a large army and counter-attacked those barbarians. He waged many wars and acted as a Catholic hero who had the spirit of faith, relying more on supernatural help than on his natural forces... He asked God for the might to win his battles...


But a danger still threatened Christendom: the presence of the Lombards in North Italy. Lombardy was not a land of pagans, but heretics who were enemies of the Catholic Faith. They used to attack the Pope and the Papal territories and opposed the Catholic Empire. So St. Henry, with the support of the Italian Bishops, entered Lombardy, defeated its army, and then went on to Rome to visit and pay homage to Pope Benedict VIII.


It was on this occasion that the Pope crowned him Emperor of the Holy Roman German Empire. In a ceremony realized with great splendor, he gave St. Henry a golden orb inlaid with pearls representing the power of the Emperor over the world. But St. Henry did not keep that treasure. To prove his love for the Church, he offered the precious gift to the holy Abbot Odilon, the head of the largest religious order of Europe at that time.


After inflicting new defeats on the revolted Lombards, he returned to Germany. There he assisted the Bishops to exert their role of maintaining discipline in the Church. He also was instrumental in the conversion of a pagan King. He offered an alliance with Stephen, King of Hungary, together with the hand of his sister, Gisela. She married Stephen and converted him. She did so good a job that he became... "St." Stephen, who afterward converted all of Hungary to the Catholic faith.


Behind this conversion was an intelligent diplomatic maneuver of St. Henry. With this he won a precious ally close to those Slavic enemy peoples who had just been pacified. His diplomatic sense was also demonstrated in the episode at the Meuse River, in which he gave up his privileges in order to please the French King. Crossing over to the French banks, St. Henry was implicitly paying homage to the King. That is, he who was more "an Emperor" paid homage to one who was less, in order to maintain cordial relations and to resolve the complicated problems of Europe.


After all these services to the Church and Christendom, St. Henry died in 1024 in the peace of God as a great saint, warrior, diplomat and politician."

Even allowing for a little embellishment and hype of Henry's virtue, it appears that, historically, Henry was a holy person, as was his wife, Cunegunde. Even though I've discovered my namesake, St. Charalampos (Harry), I think I'll also keep St. Henry. One can never have too many intercessors in the Communion of Saints!