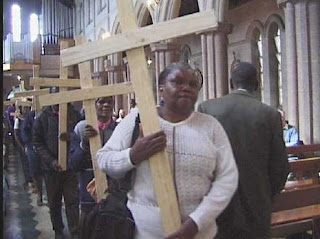 There’s a scene in the musical, Fiddler On The Roof, where Nochem the Beggar and a man have this conversation: Nochem cries out: “Alms for the poor.” A man comes along and says: “Nochem, here’s a kopek.” “One kopek!” Nochem yells, “Why, last week you gave me two kopeks.” The man says, “I know...I'm sorry, but I had a bad week.” “So,” replies Nochem, “if you had a bad week, why should I suffer?!”

Implicit in that comment is the age-old question regarding suffering: “Why?” “Why me?” In the Old Testament Job grappled with it, as have people down to our time. Elie Wiesel, noted author and survivor of the Holocaust, has spent virtually his whole life trying to understand, to make some sense of that horrific tragedy in order to help future generations.

Christians, generally, and the Anglican and Episcopal Churches particularly have a great tradition of people suffering: St. Alban, in the 4th century, the first English martyr; Bishops Hugh Latimer, Nicholas Ridley, and Archbishop Thomas Cranmer in the 16th century; Archbishop Janani Luwum, shot to death in 1977, under Idi Amin’s rule in Uganda; and Roman Catholic Archbishop Oscar Romero and the Martyrs of El Salvador in the 1980’s. I can remember in the seminary, when we were faced with difficulties or illness, being advised to “offer it up”; to accept it “all for Jesus”; to embrace “self-denial and mortification”.

For the most part, our society today looks upon suffering as an absurdity, offering no useful lesson other than making us miserable. Suffering is especially hard to deal with when we see good people go under, while misfortune often seems to pass by those who are uncaring or who cause evil. In Western society we’re easily conditioned against all degrees and kinds of suffering, perhaps because we’ve seen too much of it. I remember a sad newspaper story back in 1983 where a young teenage girl, who’d been arrested for assault, made the comment: “We stabbed an old woman today. We had fun.”

Medical science favors research which tries to abolish pain and to control disease. All day long TV ads push “doctor-recommended” tranquilizers, sleep-inducers, painkillers and hemorrhoid-shrinkers, intertwining these commercials with the latest news reports on who’s been beaten, robbed, stabbed, raped and maimed today. Human life has apparently become that cheap for some. Compassion and pity seem to be outdated and outlawed, so that we’ve almost institutionalized a sort of “new barbarism”, not least in movies and video games.

The meaning of suffering in any form is difficult to comprehend. We often don’t know what it is because suffering doesn’t seem to be uniform. Starvation in Darfur isn’t exactly the same as the hunger of a welfare recipient. Dying in the ovens of Auschwitz isn’t quite the same as dying in the bed of a nursing home. The physical pain of cancer doesn’t necessarily feel the same as the inner pain you feel when you realize that your spouse no longer respects or loves you. Perhaps we understand suffering so variously because how we experience it largely determines how we respond to it. Throughout history men, women, and children suffer and are made to suffer. They accept, submit, and resist. The struggle between life and death is fought out in a thousand ways.

We know little about the nature of suffering because it’s hard to measure or systematize how intense it is. For one person, a mental hunger may hurt more than an empty stomach. For another, separation and loss through death may affect a lover or mourner more deeply and lastingly than the loss of a home or property.

Suffering, as it has existed and exists today in our society, is often a cause of despair. The great Greek epics and elegies narrate and lament the fall of Troy and the death of great heroes. The tragedies offer their spectators a catharsis, a purging, with pity and terror. The Book of Job outlines our sad plight as human beings, as well as the rule of Wisdom. Yet none of these really leave us without some small hint of hope, even though the question “Why?” remains at the forefront of our minds and hearts.

For a follower of Christ, the answer to the question “Why?” is the acceptance of suffering as a reality, but a reality which we confront in solidarity with others. The Christian viewpoint is not fatalism or defeatism. There is a certain kind of escapism, such as that reflected in Psalm 124:7: “We have escaped like a bird from the snare of the fowler; Our help is in the Name of the Lord…” Escaping, as Ulrich Simon notes, is “...but a first step in resistance [of suffering]. “As we run away from all sorts of prisons and tyranny we meet with comrades and find solidarity. A suffering shared may become a suffering redeemed or at least eased.”

For a follower of Christ, the answer to the question “Why?” is also the acceptance of suffering shared as redemptive. You’ve heard the old adage: “Misery loves company.” There must be truth to it because, according to the Good News which Jesus preached, through our solidarity as Christians in suffering there is victory. We can’t argue this by way of the world’s logic. It doesn’t seem to make sense, but when we share each other’s burdens, we experience a love which conquers, which goes beyond suffering and evil. God, in Jesus, has been depicted through the centuries as the eternal sharer in our suffering: e.g., in medieval icons, in German art, in music by Johnann Sebastian Bach and Benjamin Britten, etc.

The passage today from Paul’s letter to the Colossians (1:15-28) helps us understand this: “...I am now rejoicing in my sufferings for your sake, and in my flesh I am completing what is lacking in Christ’s afflictions for the sake of his body, that is, the Church…” Paul certainly isn’t implying that a balanced, mature, normal Christian person commends suffering or sets out to be a “victim” or a martyr. But once one faces inevitable suffering or even death, that suffering and dying can be transformed through union with Christ crucified. Solidarity with Jesus has been the hallmark of all those who accept suffering and dying as the mystery of “Christ in you, the hope of glory”. It’s never a question of abnormally delighting in pain, but rather a conscious choice of bearing the reality of our suffering in union with Christ’s Body rather than the dishonor of not living what we profess to believe.

Our Christian witness is to share with those suffering and dying all around us, who are part of us, that despite that suffering we and they are in solidarity through the Person of Christ, that their hurts and needs are ours, and that because we are the Communion of Saints, we will do what we can to minister to their needs.

I have to confess that I’m writing this largely for my own benefit. For several weeks now I’ve been inwardly struggling with the reality that my closest friend, Fr. Leo Joseph, OSF, has been diagnosed with metastasized liver cancer. I invite all of you join me in holding him up in prayer.

It’s very hard for me to imagine a time when Leo won’t be around. Our friendship began in September, 1994, when I was Rector of St. John’s, Chico, CA, and Leo came as a guest preacher. Two years later, when I was appointed Regional Missioner at Ukiah and Lakeport, we became close colleagues in developing shared ministry in what became the Redwood Episcopal Cluster. I can hardly think of a week, and even days in a row, since then that Leo and I haven’t talked by phone. We’ve shared the commonalities and quirks of both our Roman Catholic backgrounds: the “in” jokes, a love for liturgy and theology, and spirituality. As one of the most pastoral clergy people I’ve known, Leo has taught me immensely about what is good pastoral practice. He has consistently represented in his daily living what the patron of his Order, St. Francis of Assisi, had in mind for his friars. Leo’s deep spirituality is sometimes overshadowed by his devilishly refreshing humor, especially his irreverent quip about wanting to be remembered as “St. Leo, Virgin & Martyr”! He and I have helped one another over the years through each of our “down” times, and have equally rejoiced together in the celebrations of the good things which we’ve experienced.

And now, through his incredibly realistic and honest dealing with his illness, he continues to convey to me and to others the reality of which I spoke earlier: of learning hope through the presence and power of Jesus and through solidarity with one another in the face of suffering and death. Leo genuinely understands what Paul means by “Christ in you, the hope of glory”. As he told his congregation recently, he sees his present journey as one of “going home”, and it inspires me and others to witness Leo living with such graciousness, “securely established”, as Paul says, “steadfast in the faith, without shifting from the hope promised by the gospel…” Like Mary of Bethany in the Gospel reading, Leo has “chosen the better part”: being “a [true] servant of this gospel...rejoicing in [his] sufferings for [others’] sake...in [his] flesh...completing what is lacking in Christ’s afflictions for the sake of his body...the Church”; a true servant commissioned by God “to make the word...fully known, the mystery that has been hidden throughout the ages...but has now been revealed to his saints.”

Would that each of us might have the grace and courage to do likewise.
Posted by Harry Allagree at 6:55 PM