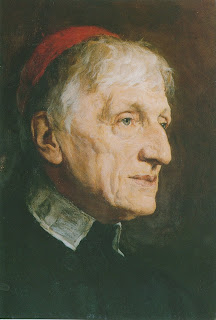 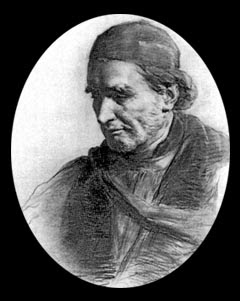 John Henry Newman
(left)
Edward Bouverie Pusey
(right)
The Oxford Movement was a movement of High Church Anglicans, eventually developing into Anglo-Catholicism. The members of the movement were often associated with the University of Oxford, and argued for the reinstatement of lost Christian traditions of faith and their inclusion into Anglican liturgy and theology.

The Movement was also known as the Tractarian Movement, after its series of publications Tracts for the Times, published 1833 to 1841. The group was also disparagingly called Newmanites (until 1845) and Puseyites (after 1845), after the two prominent figures, John Henry Newman and Edward Bouverie Pusey. Other prominent Tractarians included John Keble, Charles Marriott, Richard Hurrell Froude, Robert Wilberforce, Isaac Williams and William Palmer.

There were, of course, forerunners to the Oxford Movement. Oriel College at Oxford was ruled in succession by two energetic provosts, John Eveleigh and Edward Copleston. They encouraged their pupils to reason freely, such that the college became famous during Copleston’s provostship for the unbounded criticism in which Oriel fellows indulged. Among them were Blanco White, a former Roman Catholic priest, and Richard Whately, later Archbishop of Dublin. Oxford nicknamed such men the "noetics" or intellectuals. Society at that time held authority in high respect and, therefore, traditionalists were a bit shocked by the freedom with which the Oriel men subjected anything and everything to criticism. They were proponents of reform, both in academic and in ecclesiastical politics. They had no agreed program, and formed no party. It was never their wish to form a party. In fact, it would have defeated their chief aim: to create a habit of intellectual independence. Yet their friendship, common perspective and goals could not but enable them to have a considerable influence in the Church, particularly when later they were eventually called to higher office, as some of them were.

The immediate impetus for the movement was the Irish Church Bill or Reform Act of 1832, by which Parliament sought to reduce by ten the number of Irish bishops in the Church of Ireland. The Oxford group perceived this as an attempt to secularize the Church. John Keble was an Oriel fellow, professor of poetry, and curate to his father in a little village on the border of the Cotswolds, a man whose academic career had been one of most unusual distinction. In a sermon before the Judges of Assize at Oxford, July 14, 1833, John Keble attacked Parliament's proposal as an intrusion on the Church by the State, indeed, as "national apostasy". Keble challenged the Church of England to look at the nature and purpose of the Church catholic and to arouse herself to her own defense.

Oxford Movement leaders postulated the so-called Branch Theory, which understood Anglicanism, along with Orthodoxy and Roman Catholicism, as forming three "branches" of the one "Catholic Church". They argued for the inclusion of traditional aspects of liturgy from medieval religious practice in a Church which, they felt, had become too plain.

There were generally two reactions to Keble's sermon: a static/conservative group of such scholars like Hugh James Rose, Richard Froude, William Palmer, an antiquarian liturgist, and Arthur Philip  Percival; and the dynamic/radical Oxford group, represented primarily by Keble and Newman. The latter group began publishing Tracts for the Times. The first of these was Newman’s, Thoughts on the Ministerial Commission, respectfully addressed to the Clergy. All the early tracts sounded the same notes of stress, danger and appeal. Other writers joined them, some men of great power and worthy leaders in the cause. They would eventually publish 90 tracts. John Henry Newman, in the Advertisement of the tracts, clearly states their intent: "The following Tracts were published with the object of contributing something towards the practical revival of doctrines, which, although held by the great divines of our Church, at present have become obsolete with the majority of her members, and are withdrawn from public view even by the more learned and orthodox few who still adhere to them."

Tracts #38 and #41, Via Media, No. I & II, dealt with the ongoing attempt of the Church of England to maintain a very sensitive balance between the Church as catholic and as evangelical or protestant. The Oxford Movement felt that the evangelical emphasis at that time tended to be too insulated. It lacked a sense of corporate worship and seemingly had little sense of the sacraments. Nevertheless, some of the most forceful and popular preaching in England came from this approach. Apart from the Tracts for the Times, the Oxford group began a collection of translations of the ancient Fathers of the Church, called the Library of the Fathers, in which Edward Bouverie Pusey participated, and which ran to 48 volumes.

A major turning point in the Oxford Movement was John Henry Newman's tract #90, in 1841, Remarks on Certain Passages in the 39 Articles. In it Newman argued that the doctrines of the Roman Catholic Church, as defined by the Council of Trent, were compatible with the 39 Articles of the sixteenth-century Church of England, and that the Church of England condemns only Roman practices and excesses, not the official teaching of catholicism. In the last paragraph of the tract, Newman concludes: "...while our Prayer Book is acknowledged on all hands to be of catholic origin, our articles also, the offspring of an uncatholic age, are, through GOD'S good providence, to say the least, not uncatholic, and may be subscribed by those who aim at being catholic in heart and doctrine..." This theory, though not altogether new, aroused much indignation in Oxford, and Archibald Campbell Tait, later Archbishop of Canterbury, along with three other senior tutors, denounced it as "suggesting and opening a way by which men might violate their solemn engagements to the university." The alarm was shared by the heads of houses and by others in authority; and, at the request of the Bishop of Oxford, the publication of the Tracts came to an end.

John Henry Newman's conversion to Roman Catholicism in 1845, followed by that of Henry Edward Manning in 1851, (both of whom later became Roman Catholic cardinals), had a profound effect upon the Movement. It was attacked for being a mere "Romanizing" tendency, but it eventually began to have an influence on the theory and practice of Anglicanism.

Other major figures influenced by the Oxford Movement who became Roman Catholics include:

The Oxford Movement ultimately resulted in the establishment of Anglican religious orders, both of men and women. It incorporated ideas and practices related to the practice of liturgy and ceremony so as to bring more powerful emotional symbolism and energy to the Church. It particularly brought the insights of the Liturgical Movement into the life of the Church. Its effects were so widespread that the Eucharist gradually became more central to worship, vestments became common, and numerous Catholic practices were re-introduced into worship. This led to controversies within churches that ended up in court, particularly in the dispute about ritualism.

Partly because bishops refused to give livings to Tractarian priests, many of them ended up working in the slums. From their new ministries they developed a critique of British social policy, both local and national. One of the results was the establishment of the Christian Social Union, of which a number of bishops were members, where issues such as the just wage, the system of property renting, infant mortality and industrial conditions were debated. The more radical Catholic Crusade was a much smaller organisation than the Oxford Movement. Anglo-Catholicism, as this complex of ideas, styles and organizations became known, had a massive influence on global Anglicanism. Paradoxically, the Oxford Movement was attacked both for being secretive and broadly collusive.

After Newman's conversion to Rome in 1845, the name of the Oxford Movement became largely associated with Edward Bouverie Pusey. He had become a close student of the fathers and of that school of Anglican divines who had continued, or revived, in the17th century the main traditions of pre-Reformation teaching. His sermon, preached before the university in May, 1843, The Holy Eucharist, a Comfort to the Penitent, startled the authorities by his restating doctrines which, though well known to ecclesiastical figures, had largely faded from the common view. By the exercise of an authority which, however legitimate, was almost obsolete, Pusey was suspended from preaching for two years. His suspension led to the sale of 18,000 copies of the condemned sermon! The sermon had the lasting effect of making Pusey the most influential person in the Anglican Church for the next quarter of a century. It was one of the causes which led Newman to "swim the Tiber".

A movement, in the actual origination of which Pusey had had no share, came to bear his name: it was  Puseyism, as it was popularly known, its adherents being referred to as Puseyites. Publicly and privately, he wielded enormous weight as leader of the movement. He had his hands in every important controversy, theological or academic.

The occasions on which Pusey preached before his university were all memorable. Some of the sermons were manifestoes, marking distinct stages in the history of the High Church party of which he was the leader. The practice of confession in the Church of England practically dates from his two sermons on The Entire Absolution of the Penitent, in 1846, in which the revival of high sacramental doctrine is complemented by his advocating a revival of the penitential system which medieval theologians had appended to it. His sermon on The Presence of Christ in the Holy Eucharist, in 1853, first formulated the doctrine around which almost all the subsequent theology of his followers revolved. It revolutionized Anglican worship practices. Most noted among his books are The Doctrine of the Real Presence (1855) and The Real Presence in the Doctrine of the English Church (1857), and the Eirenicon, in which he endeavoured to find a basis of union between the Church of England and the Roman Catholic Church.
Posted by Harry Allagree at 9:09 PM

Dear FAther, I wrote my Th.D. dissertation on Newman and am currently working on a book on the Oxford MOvement.
The OM has its origins, I am convinced, in the desire to 'clean up' the mess and neglect of the parish life of the CofE. Newman and Pusey were interested in the Early Church, ignoring the idea of the evolution of thought, worship and practise. I believe Newman was a weak personality who had suffered sexual molestation at the hands of his classics' Master at Ealing School in the summer of 1814. They seemed to be the only residents. Newman was bonded to him. However, once he left Ealing for Oxford, Meyers is never mentioned again except for preaching at his first parish. Newman was constantly surrounded by small, closed groups of men. It was the refusal of his bishop to support Tract 90 that drove him from Oxford to Rome. Ambrose St.John went with him and stayed with him until St.John predeceased him. JHN and he are buried in the same grave. It was Pusey and Neale, I believe who were the reforming catalyst of the group in the direction of catholic ritual and spirituality.