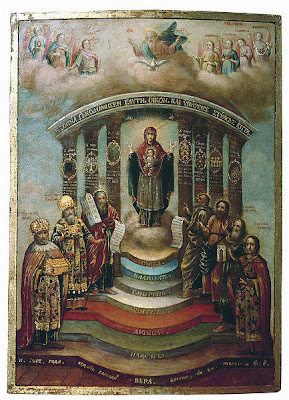 Over the past few months I've been reading about sophiology, the study of Wisdom. Two books, particularly, have given me much to think and pray about regarding the relationship between Christ and Wisdom, and the relationship of Christ/Holy Wisdom and creation, especially human beings: Sophia: The Hidden Christ of Thomas Merton, by Christopher Pramuk, and Sophia: The Wisdom of God, by Sergei Bulgakov. Pramuk's is an exciting appeal for the long-overdue recognition of Wisdom's centrality to contemporary theology and ecclesiology, and Bulgakov's is one of the finest explanations I've ever read of the relation between Scriptural accounts of Wisdom and each Person of the Holy Trinity. A warning: this isn't lectio divina for the fainthearted! It's intense and heavy. I don't claim to comprehend even half of it, but I think it's extremely relevant to our situation as Church today. I read recently a criticism of someone who is an avowed conservative regarding the way "liberals" present their take on contemporary theology.  The criticism was that you don't see much explicit mention of Jesus. Without engaging in a side-discussion of that statement, which could go on endlessly, it's a point, I believe, well taken.

That's why I was eager to share just the following few ideas, during this Christmastide/Epiphany cycle, from another great theologian, Hans Urs von Balthasar, taken from The Glory of the Lord, Vol I: Theological Aesthetics, published back in the early '80's:

"The Incarnation of the Word means the most extreme manifestness within the deepest concealment...What is most familiar to us [humanity itself] is suddenly turned for us into a word and a teaching about God...

...The insignificant must be the appearance of what is most significant. We could understand it better if the hiddenness of this 'flesh' were supposed to represent the silence of the Word, God's pure concealment. But no: precisely this hiddenness is to be the speech in which God desires to make himself known definitely and insurpassably, beyond misunderstanding or confusion with any other human word...in Christ, humanity is disclosed along with God...God takes on human nature as his own and expresses himself from within it through the expressive structures of that nature's essence...God is able, therefore, to reveal in Christ, at once God and humanity...

...Christ...is the form [of revelation] because he is the content...If for a single moment we were to look away from him and attempt to consider and understand the Church as an autonomous form, the Church would not have the slightest plausibility...The plausibility of Christianity stands and falls with Christ's...

...The fact that Christ 'says nothing to me' in no way prejudices the fact that, in and of himself, Christ says everything to everyone. What is at stake here is the correspondence of human existence as a whole to the form of Christ...

...The gospel presents Christ's form in such a way that 'flesh' and 'spirit', Incarnation to the point of suffering and death, and resurrected life are all interrelated down to the smallest details..."

Well, that ought to give us all plenty to chew on until Easter!
Posted by Harry Allagree at 3:03 PM

You are right on the cutting edge of Christian thought these days: the significance of Wisdom (and all that that entails) is being rediscovered!

I have always been interested that when Julian describes the Trinity is is Father=Power, Son=Wisdom; Holy Spirit=Love --- and, of course, Jesus being called "Mother" is related to his being seen as the feminine (Sophia) Wisdom.

I'll get your new books and give them a read....

At Trinity, Sonoma, our study group just finished a 17-week study of Cynthia Bourgeault's THE WISDOM JESUS, which completely turned some of us in a different direction!