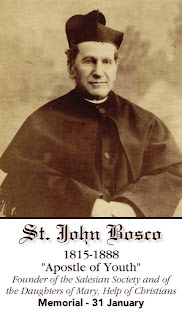 Completely as an aside note, I need to vent my amazement and objection, wondering why in the world the editors of the recent publication Holy Women, Holy Men: Celebrating the Saints, by Church Publishing, has as its heading for today's commemoration "Juan Bosco (John Bosco)". It's quite clear that Bosco was a dyed-in-the-wool Italian. In fact, in their biographical section the Church Publishing editors refer to him as "Giovanni Bosco". Why they would use the Latino name "Juan" is totally beyond me!

Born to a peasant family, Giovanni Bosco spent most of his life in Turin, Italy. He lost his father at age two and was raised in poverty by his mother. Early on he showed signs of being different from the generally rough kids with whom he grew up. Giovanni was also intrigued by traveling circuses visiting the region where he lived, and learned to juggle, walk a tightrope, and perform magic tricks, all of which undoubtedly stood him in good stead later on.

With the help of some generous patrons who recognized his intelligence and abilities, he was able to attend seminary and was ordained a priest. He was first appointed as chaplain at a boarding school for wealthy young girls, which he soon found quite unsatisfactory. He tended to gather around himself the "ragamuffin boys" of the area, to whom he would teach catechism, give basic schooling, and oversee and channel their endless energy. Officials at the boarding school apparently weren't on the same wave-length, and they fired Don Bosco.

In 1846 he opened a boys' orphanage, under the patronage of St. Francis de Sales, whose feast we commemorated on January 29. He pioneered new educational methods, and gained begrudging respect even from anticlerical politicians for his work with homeless youth and his advocacy for vocational training, including evening classes and industrial schools. In 1859, with the help of another priest and some seminarians whom he had groomed from among "his boys", he founded the Pious Society of St. Francis de Sales, also known as the Salesians.

A flavor of his healthy educational approach to young people is apparent in this excerpt from a letter which Don Bosco wrote, apparently later in his life: "If we want to be thought of as those who have the real happiness of our pupils at heart, and who help each to fulfil his role in life, you must never forget that you are taking the place of parents who love their children. I have always worked, studied, and exercised my priesthood out of love for them. And not I alone, but the whole Salesian Order.

How often in my long career has this great truth come home to me! It is so much easier to get angry than to be patient, to threaten a boy rather than to persuade him. I would even say that usually it is so much more convenient for our own impatience and pride to punish them rather than to correct them patiently with firmness and gentleness...

...It is difficult to keep calm when administering punishment. But it is very necessary if you are not to give the impression that you are simply asserting your authority or giving vent to your anger. Let us look on those over whom we have a certain authority, as sons. Let us be determined to be at their service...We should be ashamed to give the least impression of domineering. We should only exercise authority in order the better to serve the boys...

Instead, like true parents, really intent on their children's welfare and growth, show them compassion now, and always hold out hope for the future."
Posted by Harry Allagree at 2:59 PM