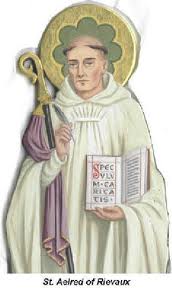 St. Aelred of Rievaulx (c. 1110-1167 AD) was a 12th century abbot of the Cistercian monastery at Rievaulx. He was an Anglo-Saxon (“Ethelred”), born in Northumbria along the Anglo/Scottish border. His great-grandfather/grandfather/father were all married priests. Aelred had two brothers and a sister, of whom one brother and his sister later became monastics as he did.

At 15 (1125) Aelred was sent to live and be educated at the court of the King of Scots, David I. He became close friends with the king’s two stepsons, Simon and Waldef, and was appointed steward of the royal table. Early on he had become familiar with Cicero’s dialogue, On Friendship, which influenced him the rest of his life. He himself became the intimate friend of a member of the court by his own account, presumably a same-sex relationship. But overall he became greatly dissatisfied and restless about his life at the court, almost, as he says, to the point of despair.

While on a mission to York in 1134, he rode over to the new Cistercian monastery, only two years old, at Rievaulx. He was so deeply impressed that, after discussing it with his friends, he entered the
monastery the very next day.

Around 1142 he was sent to Rome and on the way back he stopped at the monastery of Clairvaux where he met the great abbot, St. Bernard. Bernard was very much taken with Aelred’s literary promise and his spiritual depth. Back at Rievaulx he was made novice master in 1142 and began writing books at Bernard’s behest.

In 1143 he was sent to found a new abbey at Revesby. And four years later, in 1147, at age 37, he was called back to become the abbot of Rievaulx, a position which he held for the next 20 years.

Aelred continued writing, and during this time wrote Spiritual Friendship, among other works: a magnificent book of only 81 pages, reflecting the depth of his understanding and lived experience of friendship among men.

Aelred’s life was busy not only with his writings, but with visitations to several daughter houses, trips to General Chapter at Citeaux, not to mention his day-to-day administration of the monastery of Rievaulx, which grew from 300, when he came, to over 600 monks and lay brothers.

The last ten years of his life he suffered ill health, especially kidney stones. He lived and ate in a small infirmary cell, but graciously welcomed his monks always to come -- sometimes 20-30 at a time --
to be with one another and converse about the spiritual life.

Aelred wrote his book Spiritual Friendship initially for an enquiring monk, Ivo of Wardon, who wanted to know about spiritual friendship -- and not just from such secular sources like Cicero’s On Friendship (from which Aelred frequently quotes) -- which, as Ivo says, “lacks the salt of heavenly books and the flavoring of that most sweet name...”

Aelred replies in this way: “...friendship bears fruit in this life and in the next.” (SF, 2.9) “For what more sublime can be said of friendship, what more true, what more profitable, than that it ought to, and is proved to, begin in Christ, continue in Christ, and be perfected in Christ?” (SF, 1;10) “And, a thing even more excellent than all these considerations, friendship is a stage bordering upon that perfection which consists in the love and knowledge of God, so that man from being a friend of his fellowman becomes the friend of God...” (SF, 2:14)

This is a perfect illustration of what St. Thomas Aquinas meant when he commented: “Grace builds upon nature.” John’s Gospel (2:25) assures us that Jesus “knew all people...he himself could tell what was in people...” And so Jesus could say to his chosen Twelve: “...love one another as I have loved you. No one has greater love than this: to lay down one’s life for one’s friends. You are my friends if you do what I earnestly admonish you to do. I do not call you servants... but I have called you friends, because I have made known to you everything that I have heard from my Father...and I appointed you to go and bear fruit, fruit that will last...” (John 15:12-16)

The Gospels are full of Jesus’ references to friends: John the Baptizer referred to Himself as the “friend of the Bridegroom”. Jesus, says Mark, “called to him[self] those whom he wanted, and they came to him. And he appointed twelve, whom he named apostles, to be with him...” (Mark 3:13-14) Jesus’ critics (Luke 7:34) called him “a friend of tax collectors and sinners.” Jesus refers to “our friend”, Lazarus, as he goes to dramatically restore him to life. (John 11:11)

But Jesus was also realistic, and knew that friendships don’t always last and aren’t always sustained by both parties. After the unusual message Jesus preached about “the living bread that came down from heaven” (John 6), Scripture says: “Because of this many of his disciples turned back and no longer went about with him.” Jesus responded as such a solicitous friend that he even gave the Twelve the opportunity to opt out. Their response: “Lord, to whom can we go? You have the words of eternal life...” (John 6:66-68)

Luke’s Gospel (11:5-8) recounts a story about a person who, looking to his own convenience and comfort, didn’t want to be bothered helping his friend in a time of need. Jesus uses the parable to contrast this with God’s always-reliable friendship, and to demonstrate the need for persistence in prayer.

Finally, Jesus modelled for us how a friendship-gone-bad needs to be handled. Judas, one of the most trusted of the Twelve, the keeper of the purse, goes to the chief priests and says: “What will you give me if I betray him to you?” Though Jesus is very direct and forthright with Judas, both before and after the betrayal, never once does he disavow his friendship; he doesn’t bad-mouth Judas, or attack him in any way, or demean him. He says simply: “Friend [Matthew’s account], is it with a kiss that you are betraying the Son of Man? [Luke’s account]...do what you are here to do.” Jesus lived and modelled the message which he’d often preached to his friends and followers: denying oneself, taking up the cross, and losing one’s life: even for a disloyal friend like Judas.

St. Aelred concludes: “And so in [true] friendship are joined honor and charm, truth and joy, sweetness and good-will, affection and action. And all these take their beginning from Christ, advance through Christ, and are perfected in Christ. Therefore, not too steep or unnatural does the ascent appear from Christ, as the inspiration of love by which we love our friend, to Christ giving himself to us as our Friend for us to love...And thus, friend cleaving to friend in the spirit of Christ, is made with Christ but one heart and one soul...” (SF, 2:20-21) “Thus ascending from that holy love with which he embraces a friend to that with which he embraces Christ, he will joyfully partake in abundance of the spiritual fruit of friendship, awaiting the fullness of all things in the life to come...and God shall be all in all.” (SF, 3:134)

May we all be blessed with such friendship!
Posted by Harry Allagree at 11:47 AM

There are those who suggest that friendship is the closest human analogy to the union of the Holy Trinity, and that Jesus's declaration that his disciples had become his friends is the greatest theological statement of the union between humans and God.

Your article on Aelred is wonderful -- may he bless all our friendships!