Epiphany: Living in the Saving Light 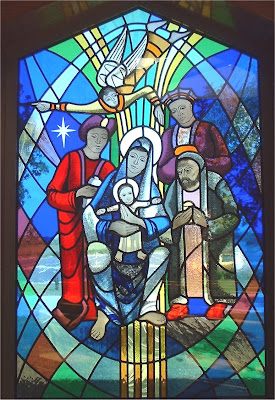 The word Epiphany, derived from the Greek epi + phaino [to shine out, become manifest], may conjure up in some minds the image of some kind of exotic pastry!

Isaiah (60:1-6 & 9) assures the returnees to Jerusalem from exile that their "light" has come. The poet speaks as if to bid someone slumped over in dejection and without hope or purpose to "Arise; shine!" Isaiah insists that God's saving light and glory has come to all the nations and peoples, even as they have come into the light. Things are changing for them. Their hearts, he says, will thrill and rejoice because of the abundance which God is about to pour forth on them. References to Midian, Ephah, and Sheba imply that all of Abraham's descendants are included in the promise fulfilled. They, just as the other nations, share in the saving light of God's glory.

St. Paul in a passage from his letter to the Ephesians (3:1-12) carries the same theme forward by speaking of the mystery, "made known" and "revealed". What God makes known is that the light of God's salvation, in the person of Jesus, has come for all. Jews and Gentiles aren't to discriminate, whether in the society or in the Church. That's a truth revealed by the Holy Spirit "to apostles and prophets", and holds true regardless of how the Ephesians or any others happen to interpret it. In this life we determine who our heirs will be; but when it comes to the inheriting of the Good News and all that it implies, only God has that privilege. The basic Gospel truth of the oneness of all, Jew and Gentile, can't become a reality automatically. You and I, as the Church, must not only preach it, but live as though we believe it. That means discovering ways, as individuals and as a community of faith, to share the Light with literally everyone we can.

In Matthew's Gospel (2:1-12) this theme takes the form of story theology. God, in Jesus, has come to save all. Matthew's whole narrative, generally as well as in this particular story, presents Jesus as the One who fulfills prophecy, and the One who upsets people's preconceived expectations. An heir of Abraham, Jesus is like another Moses and another David. Like Moses, he comes out of Egypt. Like David, he's born in Bethlehem. Yet, he's not simply the One to be "born king of the Jews". He's emphatically a child. Centuries before, Isaiah had said: "...a little child shall lead them". Those Jews who had an exclusively kingly, "adult" image in mind for the Messiah didn't take this very seriously. Small children are unlikely messiahs.

Yet, it's this Child of Bethlehem, with several non-Jewish forebears in his genealogy, who is recognized and honored as Messiah by foreigners, not by the Jewish leaders. In the Epiphany story Matthew prepares us for the two principal reactions of people to Jesus later on: homage, or rejection.

Matthew talks about strangers, Magi, sages from the East. The biblical text, by the way, doesn't say that they were "kings", nor all male, nor only three, nor that one was black, nor that they were named Caspar/Gaspar, Melchior, and Balthasar. Possibly Matthew was thinking of Babylonian astrologers who studied the stars. About all they seem to have learned was that a king had been born in Israel. The Hebrew Scriptures were their guide in determining where he was born.

In speaking of the "star", Matthew may have been recalling the coming together, around 7 BCE, of the planets, Jupiter and Saturn, in the constellation Pisces, thus causing a bring light, an occurrence which happens every 794 years. In ancient thinking, Jupiter was the royal star belonging to the ruler of the gods and humans. Saturn represented the star of Israel. Or, perhaps, Matthew was thinking of a nova, a short-lived, but brilliant, light caused by an explosion of a white dwarf star. Such a nova seems to have appeared in the eastern sky around 5 BCE, according to Chinese records.

Nevertheless, the sages' message of Jesus' coming upset not only Herod the King, prince of duplicity and evil, but all of Jerusalem. Jesus' Epiphany was and is and should be deeply "disturbing". Cities, then as now, are symbols of power. The implication in Matthew's story is that age-old Jerusalem, the "city of peace", will never be the same. God's saving purpose is now unequivocally extended beyond the Holy City, beyond the people it represents, to all nations, and, indeed, to all people on the earth. Jesus, He saves, Son of the Most High, is Savior of all.

Once again this year, you and I have awaited and celebrated Jesus' manifestation throughout the Christmas/Epiphany feasts. But how are we to receive the Saving Light into our day-to-day lives again this new year, as well as to anticipate his coming as the fulfillment of all things?

The late Bishop Kenneth Untener (1937-2004), former Roman Catholic bishop of Saginaw, MI, once related a story about his family who lived on an island. On Saturdays his parents would often travel to the farmer's market in downtown Detroit to buy food. Before leaving, they'd assign their children Saturday chores, which were to have been completed by the time the parents returned. As soon as their parents left, the youngsters would have a great time playing baseball or whatever. When they figured it was about time for their parents to reappear, someone was posted on the shore with a pair of binoculars. The lookout's job was to watch the distant bridge in order to spot the family car heading home. It took about ten minutes from the bridge to get to the house. As soon as the lookout signalled, the youngsters would swing into action and work as hard as possible during that final ten minutes. Of course, they were never finished when their folks arrived, but they made a good show of making it look as if their labors had taken several hours!

That's one way to prepare for an arrival: scramble to get things ready when you figure that it's about time. But that's not a very appropriate way to prepare for the coming of Jesus, the Saving Light. How do you and I, the Church, prepare for the Lord's coming? The disciples thought the best way was to know exactly when it would happen. "Tell us," they said to Jesus, "when will all this occur? What will be the sign of your coming and the end of the world?" Jesus told them that no one knows the exact day or hour. There aren't any binoculars to spot it from a distance, despite occasional claims by fundamentalists and others to the contrary. [In fact, as of this writing, I heard recently of the latest "prediction" of the end-time: May 21, 2011. It happens to coincide with the birthday of my dear friend, Fr. Leo Joseph, OSF, who has terminal cancer. He jokingly told me that, of course, he'd planned this "grand exit" on his birthday and for us all to join him!] After squelching that idea, Jesus taught the disciples the only way to prepare: to simply make sure, every single day, that others -- the poor, the suffering, the homeless -- are the center of one's concern, bearing in mind, of course, that poverty, suffering and loneliness can take many different forms.

That wasn't just a casual remark by Jesus. It really was the bottom line of all his teaching in the Gospel of Matthew: "When the Son of Man comes in glory...all the nations will be assembled before him." We know the rest of that passage, which depicts God addressing two groups of people, telling them that the whole thing is based on how they've treated the hungry, the thirsty, the stranger, the naked, the ill, and the imprisoned. This was no parable or allegory. It was the real deal! If you haven't served these folks, then you haven't served God, because God is in them.

Scholars have long pointed to the text, "He who hears you hears me..." to demonstrate how Jesus identified himself with the Church's leadership. The stunning truth is that Jesus identified himself even more closely with the poor and suffering. "As often as you did it for one of them, you did it for me." Such works aren't reckoned as if they're done to him. They are done to him. The way that you and I, the Church, live our calling and prepare for the Light's coming into our lives daily is by responding, day in and day out, to his coming to us in the person of others: to anyone who is near and needing us most.
Posted by Harry Allagree at 1:06 PM